Who Listens to Albums Anymore?

Lil Uzi Vert’s Eternal Atake is a sprawling epic of an album, an 18-track, 62-minute journey two rather chaotic years in the making. It’s also, at its core, something of a concept album, following the Philadelphia rapper’s abduction and subsequent journey through space. In other words, Eternal Atake was designed to be listened to in its entirety, which means Uzi made a pretty bold assumption when he released it in March of 2020: That people still listen to albums.

Streaming has long been a symbol of death for the old album, a dark hooded figure that threatens to destroy the LP with an ever-growing supply of all music, ever, for a never-growing price of $10 per month. And for the album as a product, predictions of its demise have largely come true: Sales have been on a double-digit tumble since at least 2016, according to figures from Alpha Data. But many have feared that the album as an experience is in danger, too, that in the age of playlists and TikTok hits, when our attention spans have been re-jiggered for 30-second spurts and labels have adopted a strategy of “throwing out content,” the act of sitting down with an album from start to finish would become old hat.

In the past few years, as streaming has hit one trillion  per year and counting, many artists have eschewed the album as an experience for the album as something else, like a charts play to get as many streams as possible. (See Migos’ 24-track “transitional inventory dump” Culture II.) And then there are things like Lil Nas X’s 7 EP, that reach the upper reaches of the charts despite being cushion for one monstrous, cannibalizing hit.

But it turns out, music fans do still listen to have a hunger for the album as an experience. Lil Uzi Vert fans still seem to listen to like Eternal Atake as an album, from”Baby Pluto” to “P2.” And they aren’t the only ones.

Eternal Atake is one of the many albums that, when you look at the totals streams for each of the album’s songs, there’s a pretty even distribution, indicating a more complete listen. Using streaming data from Alpha Data, the analytics provider that powers the RS Charts, we analyzed thousands of albums released in the past 10 years to see how completely streaming audiences listen to albums. We gave each album a score based on how equally an album’s streams are divided among its songs. The closer an album’s score is to 100, the more of it the average listener has consumed. Eternal Atake‘s score is 91, among the highest scores analyzed.

When we did that, we found some good news:  Since the start of 2015, the average score for the top 500 albums has actually increased slightly, from 64 to 68. Older albums are more likely to have a lower score — we all seem more likely to return to just our favorite tracks off older albums, while we’re more likely listen to an album all the way through when it’s first released — so we looked at the top albums released each year, and only measured streams in that year.

Now, we don’t have any way of seeing how this compares to the pre-streaming days, since there’s no data on whether someone who bought a physical album listened to it entirely or not, and some of this likely has to do with the fact that more and more people are turning to streaming each year as their primary source of album consumption. But at least we know it hasn’t gotten worse, like many people anticipated. 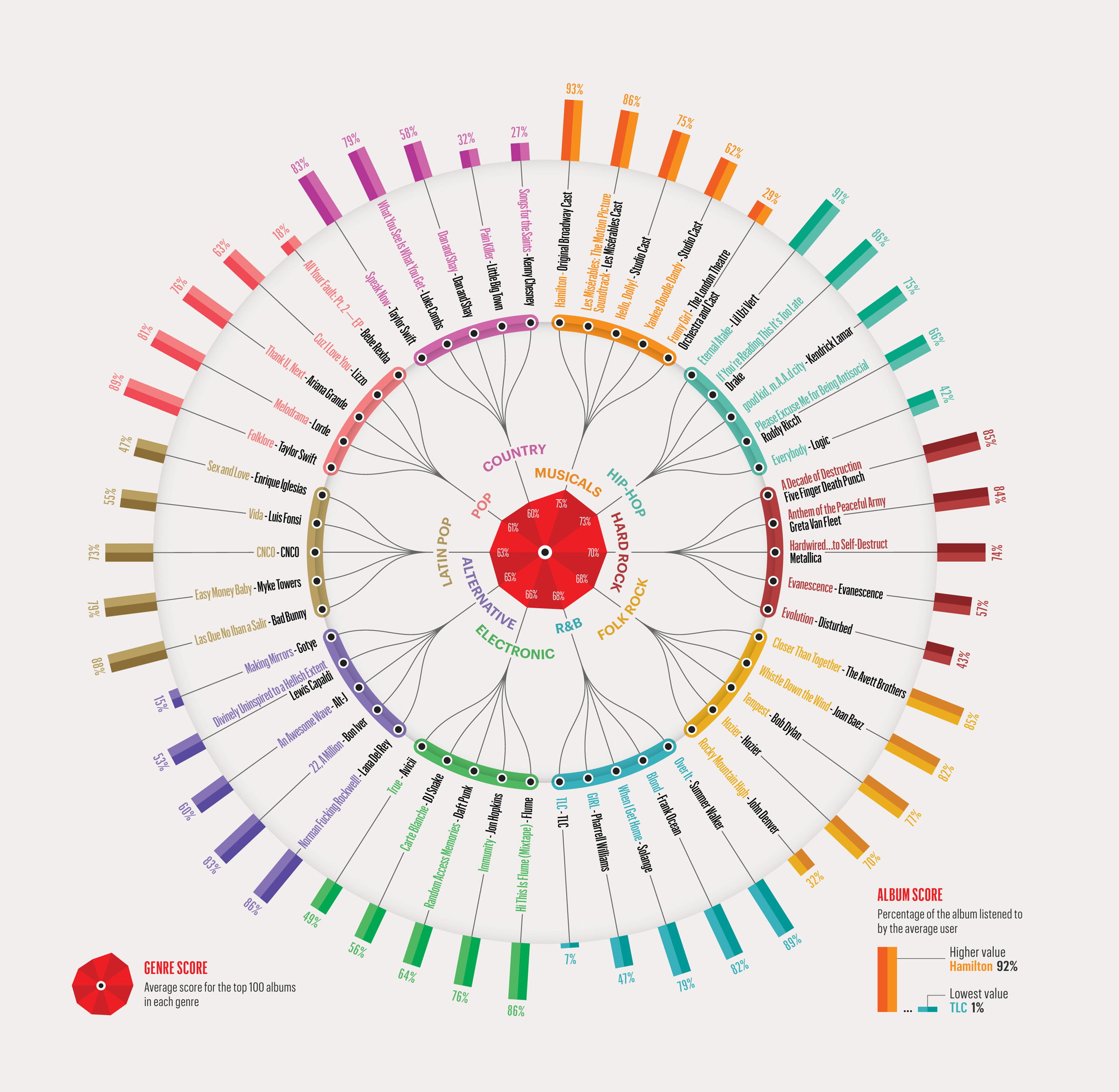 Right-click on the infographic to open larger in a new tab. (Infographic by Valerio Pellegrini for Rolling Stone)

But some genres fared better than others, and within each genre, there are albums like Lana Del Rey’s Norman Fucking Rockwell! and Taylor Swift’s Folklore that are listened to almost completely, and then there are those like Gotye’s Making Mirrors — a.k.a. “Somebody That I Used to Know” and Other Songs — and Avicii’s debut studio album True, dominated by the country-EDM smash “Wake Me Up.”

Overall, musicals had the highest average score, of 75, while country albums had the lowest average score. But Luke Combs’ What You See Is What You Get has a much higher completion rate than, say, the Funny Girl soundtrack, which is ruled by “Don’t Rain on My Parade.” And while pop music, on average, doesn’t score as high as hard rock, people are more likely to listen to Lorde’s Melodrama all the way through than they are to Metallica’s Hardwired.. To Self Destruct.

Take a look at the graphic above to see how various genres and albums stack up.

Scores are measured by comparing the relative standard deviation of the streams for an album’s songs. Genre scores were measured from the average scores of the top 100 albums in each genre released in the past 10 years. To rule out streams from promotional singles released ahead of the album, only streams on or after the album’s release date were measured. This analysis is limited to subscription on-demand audio streams in the United States.