The phrases “avant-garde improvisational noise rock” and “hot new buzz band” don’t often show up next to each other in the same sentence. But they’re hard to avoid when discussing London’s Black Midi, an adventurous group that’s somehow broken through over the last couple years to become one of the most hyped acts in the U.K. — despite (or perhaps because of) a sound tailor-made to challenge and bewilder listeners in its prog-punk weirdness.

Since forming in 2017, Black Midi has been slathered in the kind of hype that seems a little excessive even for England. Before they’d released any music, the band was playing packed clubs and drawing rapturous festival crowds purely on word-of-mouth enthusiasm. A 2018 headline in NME asked “What’s the deal with Black Midi: the ‘best band in London’ no one knows a thing about?”; The Times of London called them “the most exciting band of 2019”; The Financial Times went with “the most exciting new band in Britain.” (The Economist has yet to weigh in.).

Black Midi’s excellent debut, Schlagenheim — released last year on Rough Trade Records, the iconic label that signed the Smiths and the Strokes — was nominated for the Mercury Prize, and they followed it with a mostly sold out 21-date American tour. “We intended our first show to be our last, so the whole band has been a surprise,” says Black Midi singer-guitarist Geordie Greep. “You’ve got to keep it relative. In relation to Drake or someone, it’s still grassroots.”

The band met while attending London’s prestigious BRIT School, an arts and music academy that numbers Adele and Amy Winehouse among its illustrious graduates. Greep and drummer Morgan Simpson bonded over their shared love of jazz fusion, especially John McLaughlin’s Mahavishnu Orchestra; bassist-keyboard player Cameron Picton is a fan of West African highlife and Congolese soukous; guitarist Matt Kwasniewski-Kelvin was partial to classic rock and Japanese noise bands like the Boredoms. Nearly all those elements would soon show up in the band’s sound.

Their own backgrounds as musicians were also diverse. Greep got into the idea of learning guitar as an eight year-old Guitar Hero addict; Simpson took up the drums at age five, playing gospel, reggae, and soul music in the church where his father was parson.

“We didn’t talk about music that much,” says Greep. “We just liked each other’s personalities.” 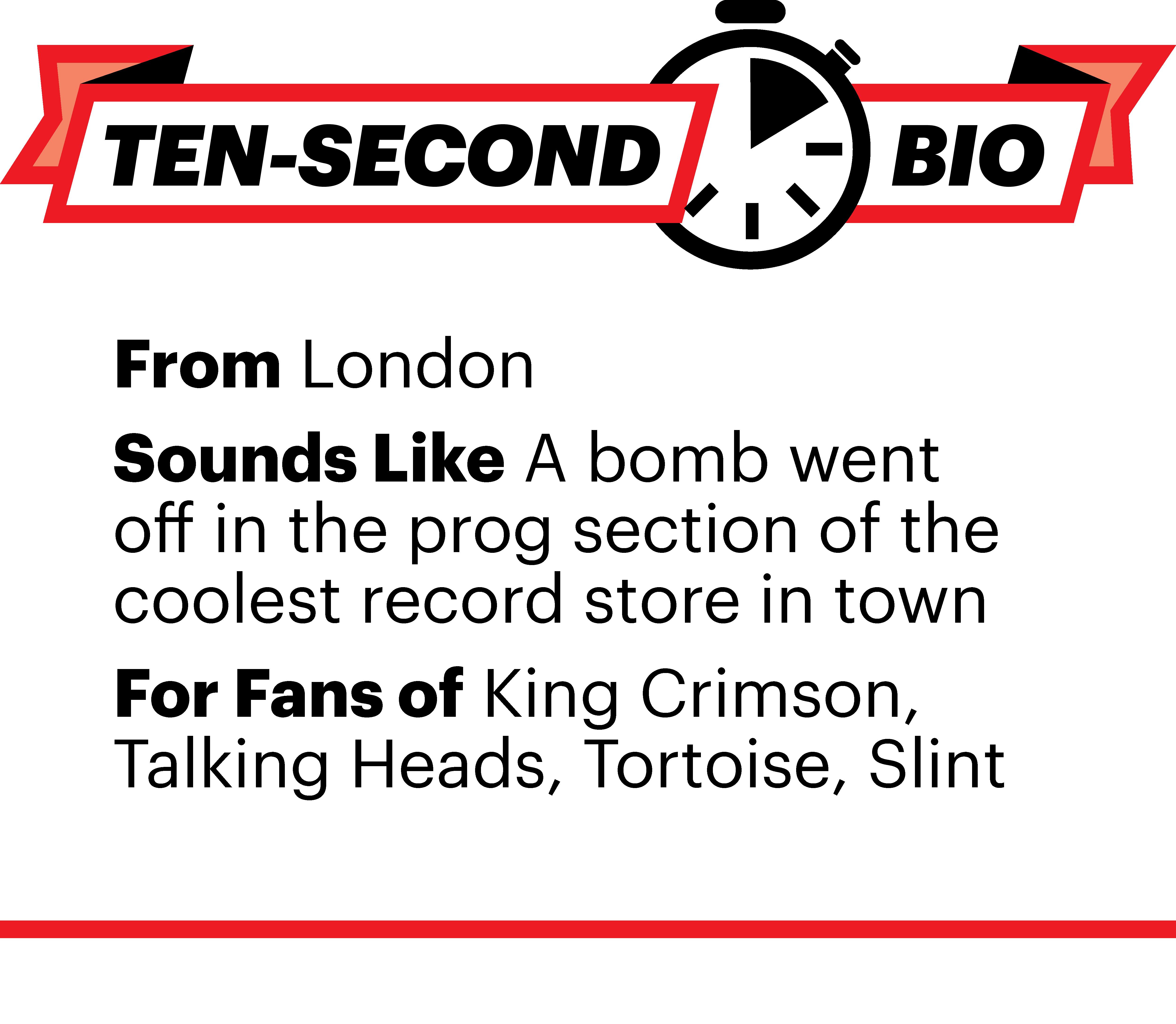 After an impromptu jam during a lunch break, the future members of Black Midi started rehearsing together, including weekly performances as part of their coursework, where they’d impress their somewhat bemused classmates with 20-minute improv escapades. “It did feel very easy when we first started playing together,” says Simpson. “The first few times I remember feeling, ‘Wow, it’s like we’ve been playing for ages together.’ It felt like we all just slotted in, like it was meant to be.”

The sound they began shaping during those jams, which could approach two hours in length, was an explosive yet subtle mix of tumultuous guitar interplay, ambient texture, and knotty, propulsive rhythmic attack. They got their first gig at the Windmill, a Brixton club with an open-minded booking policy, playing for 15 people including a couple of their dads who helped transport gear. That gig became a weekly residency. “In the very early days I’d be pretty knocked out after every show,” says Simpson. “It’s exercise, man. That’s the thrill that you get out of it, because you’re putting so much effort in.”

Back in their practice space, the band recorded everything they did, piecing the parts they liked into multi-part compositions that could be punishing or pastoral or straight-up rocking. As they played more shows, Greep worked out a loopy, weirdly genial vocal harangue somewhat reminiscent of Talking Heads’ David Byrne or David Thomas of Pere Ubu. He sees his unique singing style as a way around the masculine shouting you hear in much punk and noise rock. “I’m not, like, a big, strong man,” he says. “I just thought it would be silly. I wanted to do something more melodic, and more interesting and more nuanced. So gig by gig it got more refined. It’s kind of changing even now.”

After being courted by “loads” of labels, Black Midi signed to Rough Trade, impressed and reassured by the label’s founder, Geoff Travis, a legendary figure in the U.K. independent music scene. “He said that we reminded of him when he saw King Crimson in the Sixties,” says Greep, “so that was pretty cool.”

A couple songs on Schlagenheim (like the angularly ass-kicking, Greep-penned opener “953,” or Picton’s slippery, Talking Heads-ish “Speedway”) were written by individual members and presented to the band to be honed into finished tracks. But most Black Midi songs go through a process of piecemeal composition, as the band sutures bits of different jams together, reworking, rebuilding, and polishing as they go.

“There’s no clear criteria for a good jam or a bad jam,” says Greep. “You can feel whenever everyone’s on the same page or when something is a genuinely good sound or idea. Often times it’s just on the cusp or on the edge, like you’re running toward the light but you’re not quite getting to it.You’ve always got to go in and tinker with what you’ve come up with.”

Many songs on Schlagenheim took months to nail down, resulting from writing processes involved and complicated enough that the band has a hard time remembering exactly how they came together. One origin story that stands out for Greep is the writing of the album’s final track, “Doctor.” “Matt wanted to buy a new TV, and we didn’t have any money,” he recalls. “So we thought, ‘Hey, let’s go out on the street and try to make some money.’ Some days we’d make loads, some days we’d make five pounds in five hours. One time we were just jamming out and we came on the riff to that track. We got so into it — we were playing this one three-note, one-bar riff for, like, an hour. People were walking by thinking, ‘What are these guys doing?’ It was kind of like a techno riff, because there wasn’t much variation or anything, just this riff for ages.”

Black Midi’s embrace of the somewhat fraught word “jam,” and all the Phish-ily un-punk undertones it comes with, gets at a freewheeling, open-ended attitude that can make their at times abrasive music feel more welcoming than one might expect. It comes through in moments on Schlagenheim like the lovely, almost Grateful Dead-like passage on “Western,” and in their live shows, where combustible improvisations can mutate into fun little riffs on anything from Hendrix to Limp Bizkit to the Champs’ Sixties party classic “Tequila.” Last year, they toured with Houston rapper Fat Tony, who joined the band onstage to freestyle over the throbbing, bass-heavy menace of Schlagenheim‘s “Bmbmbm.”

That energy is reflected back in their audience; at a show last fall in Brooklyn, a gender-mixed crowd danced along as much as they moshed and pogoed. Early this year, Black Midi also showed their satiric sense of humor, releasing the Ed Sheeran dis track “Ded Sheeran (Ed Sheeran Send) Part 1,” in which Greep comes off at once pissed-off and a bit tongue-in-cheek, spitting lines like “Ed Sheeran sucks/You sell-out ginger prick” over a frenetic track that brings to mind the post-genre mutations of 100 Gecs or Death Grips.

As for where the band’s music is heading, Greep says whatever they put out next will be “unrecognizable” from what they’ve done so far, somewhat elusively promising something “more complicated but more simple, more clever, more subtle.”