While watching the stolen sex tape featuring Baywatch star Pamela Anderson and Mötley Crüe drummer Tommy Lee, Uncle Miltie (Nick Offerman) says, “This is so private. It’s like we’re seeing something we’re not supposed to be seeing.” A beat later, he admits, “Which is kind of what makes it so fucking hot.”

That push and pull between embarrassment and lust drives much of Pam & Tommy, and Jay Leno monologues. The eight-part miniseries (based in part on a 2014 Rolling Stone story) humanizes Anderson (played by Lily James) and Lee (Sebastian Stan), acknowledges all the ways the theft of their sex tape transformed celebrity and media culture, and still manages to be absurd and at times hilarious in a way that will leave you gasping for breath. (It’s everything Ryan Murphy tried and failed to do with docudramas like Halston and Impeachment.)

Pam & Tommy starts in the summer of 1995, with carpenter Rand Gauthier working on the newlyweds’ new master bedroom. In its opening moments, he’s distracted from his work by their constant, extremely loud lovemaking, and begins firing his nail gun in rhythm with their moans. The gag is not subtle, but then, neither were international sex symbol Anderson and metal bad boy Lee. The first hour largely focuses on Gauthier — a dreamer whose would-be inventions (“Imagine a microwave, but for cold!”) never materialize — as he’s abused and ultimately stiffed by Lee for his work, inspiring him to rob the couple’s safe for revenge. (The details of the theft briefly turn this into a heist movie.) It’s a clever way into the story, playing into our preconceptions of Anderson and Lee as oversexed cartoons in need of comeuppance, and initially framing Gauthier as the sympathetic injured party (Rogen’s terrific, and surprisingly convincing as a blue-collar grunt) who just gave people what they wanted.

This is just setting up the audience for the way Pam & Tommy ultimately takes the side of its title characters (her more than him), played fantastically by James and Stan. In real life, James looks nothing like Anderson, yet the hair-and-makeup team somehow transform her into a dead ringer. The show also endows her and Stan with convincing re-creations of Anderson’s and Lee’s most famous physical attributes — the latter the subject of an utterly bonkers scene that the rest of the year in television will have to work long and hard to equal, let alone rise above.

But James’ and Stan’s performances go much deeper than their newfound resemblances to Anderson and Lee. They’re not playing the caricatures we thought we knew. James’ Anderson is particularly winning. She’s keenly aware of what the world expects of her, and of the wild benefits and intense drawbacks of her iconic physique. Often, she comes across as the small-town British Columbia girl she was before she became heroic lifeguard C.J. Parker, and she’s smart enough to know that Lee will not be healthy for her, even as she can’t resist his outsize charisma. And the magic of the thing is that Stan makes Lee seem genuinely charming — a dim, volatile asshole to the rest of the world, but someone whose appeal to Anderson makes immediate, perfect sense. Near the end of a whirlwind courtship in Cancún, he asks her, “Would you do me the insane honor of being my wife?” And how could she possibly say no to such a question? We all know the bad times ahead for them as a couple, including incidents of domestic abuse by Lee, but none of this version of the story works if their initial flush of love doesn’t feel real. After Gauthier and porn veteran Miltie (Offerman embraces the sleaze of it all) begin selling copies of the tape, Gauthier’s ex-wife, Erica (Taylor Schilling), watches it and says, “I kinda like them. I know he’s a fucking idiot and everything, and he is, but he’s strangely kind of likable.” 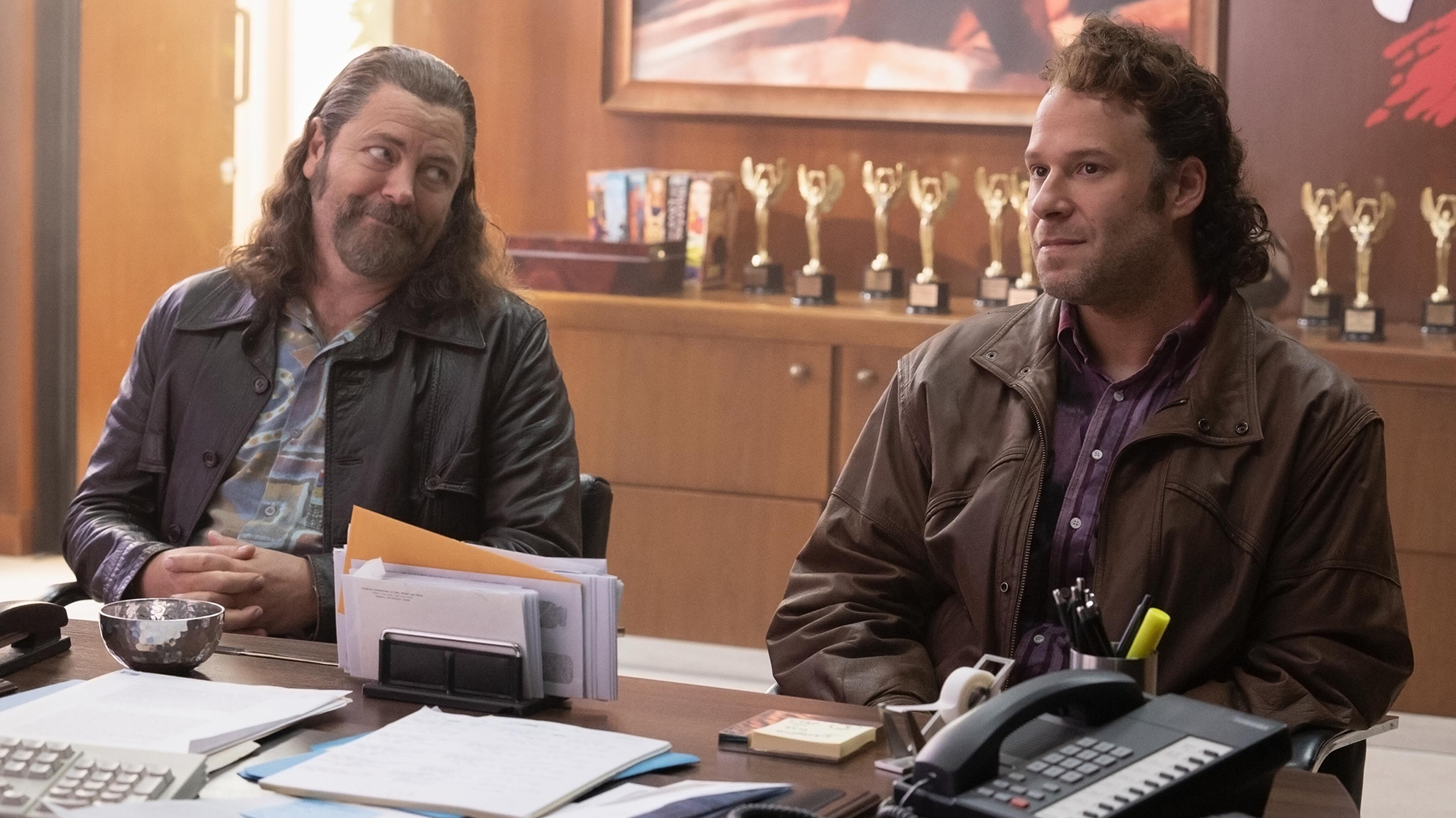 From left, Offerman as Miltie and Rogen as Rand. (Photo: Kelsey McNeal/Hulu)

The narrative runs on parallel tracks. In one, Gauthier and Miltie figure out how to distribute copies of the stolen tape, until the operation (financed by a loan shark played by Andrew Dice Clay) slips out of their control. In the other, Anderson and Lee discover that the most intimate part of their relationship has become terribly public, and that they have no way to stop it. Together, the two stories point the way toward the next quarter-century of popular culture. The sex tape ruined Anderson’s career (well, that and her disastrous movie-star vehicle Barb Wire, about which Pam & Tommy pulls no punches), but only six years later, the release of a similar one started Kim Kardashian down the path to becoming a billionaire influencer. Coupled with the Clinton-Lewinsky scandal, the tape transformed how we talk about sex, making taboo topics into normal parts of public discourse. It was one of the first products to sell like hotcakes through the internet, and once a digital copy of it was uploaded to an early webcam site, it helped bring the idea of internet porn into the mainstream.

Before all of this happens, Pamela tells a publicist for Barb Wire that she aspires to be like Jane Fonda, a sex symbol who then became an Oscar-winning actor and antiwar activist who never cared what people thought of her. Fonda also became associated with bestselling videotapes, but in the case of her workouts, it was voluntary. Pam & Tommy repeatedly acknowledges the unfair toll the sale of the tape took on Anderson’s life, even as it’s wildly entertaining most of the time. Pamela Anderson never got to have a Jane Fonda-esque second act, and maybe couldn’t have even if Rand Gauthier had never entered her husband’s life. But here, she at least gets her story retold in a far kinder and more endearing way.