Kids, this is — I promise — the story of How I Met Your Father, a gender-flipped reinvention of HIMYM starring Hilary Duff as our love-starved heroine, Kim Cattrall as her older self revisiting her young adulthood, and the HIMYM creators producing but not writing it. (The actual showrunners here are This Is Us vets Isaac Aptaker and Elizabeth Berger.)

Kids, when I heard that people were again(*) trying to spin off HIMYM, I worried I would dislike the new show because I couldn’t let go of how badly the original fell apart by the end. I worried that HIMYF would, like its predecessor, become too cute for its own good, prioritizing plot twists and other surprises over consistent characterization. I worried that Aptaker and Berger might feel compelled from the start to reassure viewers that they would never, ever, so much as think of giving the Father a paper cut, much less kill him, and that the meta humor about that would overwhelm everything else. I worried about a lot of things, really, even as I hoped against all common sense that with a fresh start and a largely new creative team, I would fall for the new show much like I once had for its parent.

(*) CBS already tried it right after HIMYM ended with How I Met Your Dad, an unsold pilot that, had it gone to series, likely would have prevented star Greta Gerwig from directing Lady Bird. So the timeline worked out the way it should have in that case.

The one thing I did not expect, kids, was that I would dislike How I Met Your Father for a far simpler reason: It is not funny. At all.

But, like many of Ted Mosby’s digressions about how he met his kids’ doomed maternal figure, we first have to start elsewhere in our story, with the HIMYF basics. Duff plays Sophie, a photographer wishing she could find love before she exits her twenties. As she tells anyone who will listen — including BFF roommate Valentina (Francia Raisa), Valentina’s formerly rich British boyfriend Charlie (Tom Ainsley), or her Uber driver Jesse (Chris Lowell), who somehow joins Sophie’s inner circle along with his sister Ellen (Tien Tran) and best friend Sid (Suraj Sharma) — she has been on 87 Tinder dates in the past year, with no serious prospects among them. But because Sophie is a hopeless romantic, she keeps on trying, starting off with Ian (Daniel Augustin), a marine biologist whose DMs make him seem meant for her.

All of this is narrated by the Sophie of the year 2050. In a reversal of how HIMYM used the voice of the late Bob Saget as the future Ted Mosby, HIMYF puts Cattrall on camera early and often, while the son she is boring with her story is a disembodied voice on the other end of a call. “This story is about the journey, not the destination,” this older Sophie warns her son at one point. “I’m gonna get with a whole bunch of dudes before I wind up with Dad.”

The HIMYM pilot created the impression that Ted’s new love interest Robin would be the Mother, only to famously end with Future Ted declaring, “That, kids, is the true story of how I met your Aunt Robin.” It was an unexpected twist that would eventually prove that show’s creative undoing, because it locked the writers into a set of circumstances that in time led them to kill the Mother and anger many of their viewers(*). The HIMYF premiere also ends with a twist, and without giving it away, I can say that it’s one that allows Aptaker and Berger to keep their options more wide open going forward. But it also makes it a bit harder to then stay engaged in what’s happening in the present-day story with Sophie and her friends, because you have to constantly do the math on how Future Sophie’s own declaration could come true. It’s part of the franchise’s DNA, but it’s also more trouble than it’s worth.

(*) HIMYM remains the classic example of why long-term plans for TV series can sometimes do more harm than good. Over time, the show evolved beyond the original plan, but the creators refused to change things to acknowledge that.

But that’s ultimately less of a problem than the comedy. For as much as we now focus on the many romances of HIMYM and the various bad ways they ended, that series initially made such an impression because of how witty it was, how it played around with time and space and perception to pack in even more humor, and, at first, what a comic force of nature Neil Patrick Harris was as Ted’s suit-loving pal Barney Stinson. Barney’s shameless, calculated pursuit and manipulation of women didn’t age well at all. But in those early days, his larger-than-life persona — and the way Harris’ sheer likability cut through some of the character’s most heinous qualities — afforded the writers time to figure out what was inherently amusing about the rest of the cast. 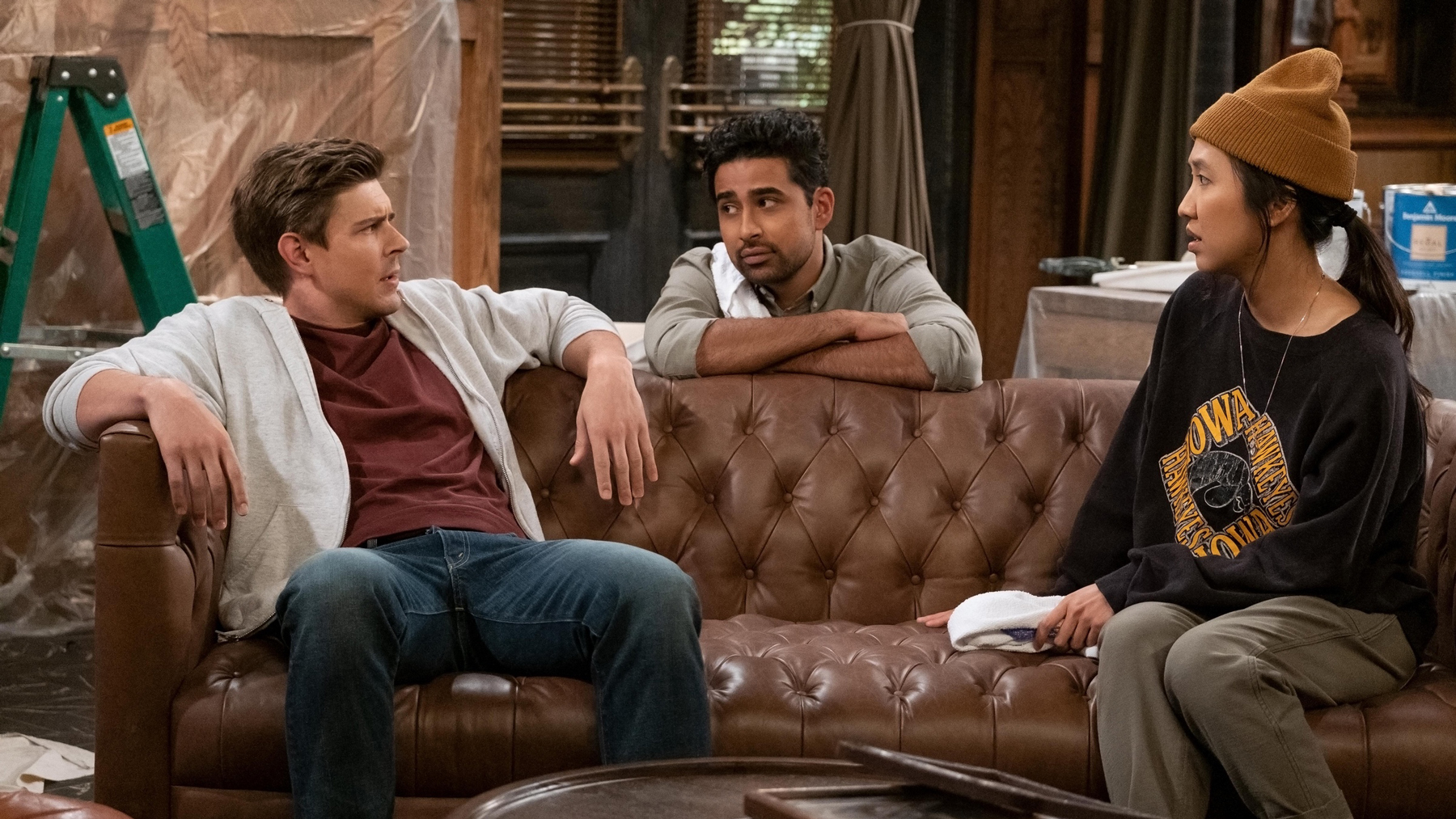 From left: Chris Lowell, Suraj Sharma, and Tien Tran in ‘How I Met Your Father.’ (Photo: Patrick Wymore/Hulu)

HIMYF doesn’t have a comparable figure. Its cast of characters is more inclusive than the HIMYM quintet of straight white people, but with the occasional exception of Valentina, they’re all almost pathologically nice. And their personalities are so generic and fairly one-note — Sophie an optimist, Jesse a pessimist, Ellen awkwardly enthusiastic, Charles ill-equipped to navigate life without his trust fund, etc. — that there’s no humor to be found anywhere. That’s in spite of a cast of game and otherwise appealing performers. Duff has been acting on television for over 20 years, going back to her adolescence; she’s a pro. So are Lowell (GLOW), Cattrall (enjoying herself far away from the clutches of the maligned Sex and the City sequel And Just Like That…), and Josh Peck (in a thankless recurring role as a Sophie love interest who we already know will not be the Father). And even the less well-known members of the ensemble seem likable enough that they could probably wring some laughs out of even mediocre punchlines. But the gags are uniformly lifeless. Specificity is everything in comedy, and there’s none to be found here.

Though the franchise has moved from CBS to Hulu, the only stylistic change of note is some occasional mild profanity, like when Valentina uses the phrase “crushing dicks” in the second episode. (The characters spend a lot more time on their phones, but it’s 2022, so of course they would.) Longtime HIMYM director Pam Fryman takes up the role again here, and continues to use the hybrid format of the original show: lots of locations and flashbacks and cutaway jokes like a modern single-camera comedy, but brightly lit and featuring a laugh track like a traditional multicam sitcom. Multicams can still work these days (see The Conners, for instance), but it’s really hard (Netflix has put out some utterly dire ones of late built around performers like Jamie Foxx, Kevin James, and Katharine McPhee). That laugh track can really grate when it’s trying to prop up jokes that aren’t working.

And if HIMYM could be guilty (especially at the end) of being too clever for its own good, HIMYF barely tries to be clever at all. Outside of Future Sophie’s running commentary, there’s very little of the formal playfulness that could make HIMYM interesting to watch even on nights when the comedy wasn’t quite clicking.

Not only did How I Met Your Father never make me laugh, but the only time I even found myself smiling was when some of the characters arrived at a location I knew well from How I Met Your Mother. And even that nostalgic pleasure only lasted as long as it took me to remember all the ways that HIMYM curdled and stumbled in its later years. This new show feels like dating someone who superficially reminds you of a long-term ex, but without either the exhilarating highs or maddening lows that made the original relationship the kind you would one day tell stories about. It’s just another piece of familiar IP that’s been dusted off without any idea of what to do with it.

Sorry, kids. I wish I had better news for you.