At one point in Away, Netflix’s new drama about the first manned mission to Mars, NASA commander Emma (Hilary Swank) asks her ship’s chief scientist Yu (Vivian Wu) how Yu copes with being millions of miles away from her loved ones. Yu, aware of how much Emma has struggled with the separation from her own family, admits that her heart would break apart if she thought too much about spending three years from her son. “But, we’re going to be the first human beings to set foot on Mars,” she adds. “I look that way. You’re looking in the wrong direction, Commander.”

Over the course of the 10-episode first season, Emma and Yu are set up as spiritual opposites: Emma emotional and often distracted by drama involving her engineer husband Matt (Josh Charles) and their teenage daughter Alexis (Talitha Eliana Bateman), and Yu cool and professional, at times to a fault. Away tries to find a happy medium between the two as it balances the story of the mission and its many crises with what Matt, Alexis, and everyone else left back on Earth is up to. Too often, though, it feels that the show, like its main character, is looking the wrong way. The space scenes, while familiar(*), are energetic, fun, and often moving, while the Earthbound drama feels like we’re being abruptly yanked back into normal gravity after getting to enjoy the wonders of floating among the stars.

(*) Away is actually the second streaming drama about the first manned mission to Mars — both starring a two-time Oscar winner as parent of a rebellious teenage daughter. Hulu’s The First, with Sean Penn, was largely a dud, though its own mission had only just begun when it was canceled after one season, where Away begins with Emma’s crew on the moon as a final pit stop before heading to the Red Planet. At the rate this is going, I assume Amazon is a couple of years away from its own version, maybe with Frances McDormand or Mahershala Ali, that begins with the crew already on Mars?

It’s easy to understand why the show — created by Andrew Hinderaker, and run by Jessica Goldberg, with an impressive producer list that also includes Friday Night Lights/Parenthood boss Jason Katims, Matt Reeves, and Edward Zwick (who directed the first episode) — might want to split its focus between home, and well, away. It’s not just that outer space scenes are more complicated and expensive to film, particularly when you aspire to this level of casually convincing special effects, like a lovely little moment where veteran cosmonaut Misha (Mark Ivanir) snores in zero gravity in the ship’s common room. It’s that domestic scenes in theory provide a breather from a situation that’s both high-stakes and a bit monotonous (space travel is usually about keeping things routine), while also creating greater emotional investment in the characters as they risk their lives. But the scenes with Matt and/or Alexis are incredibly tedious — as formulaic as the space scenes can sometimes be, but without the added benefit of, you know, being in space. There are various complications back in Houston, including several medical crises and Alexis engaging in risky behavior to cope with her mom’s extended absence. But it’s all so routine and lifeless that the scenes have the opposite of their intended effect: They make you less interested in learning about Emma, rather than more, because she is defined largely through her relationships with these two. (Charles and Bateman both do what they can, but there’s no there there.) 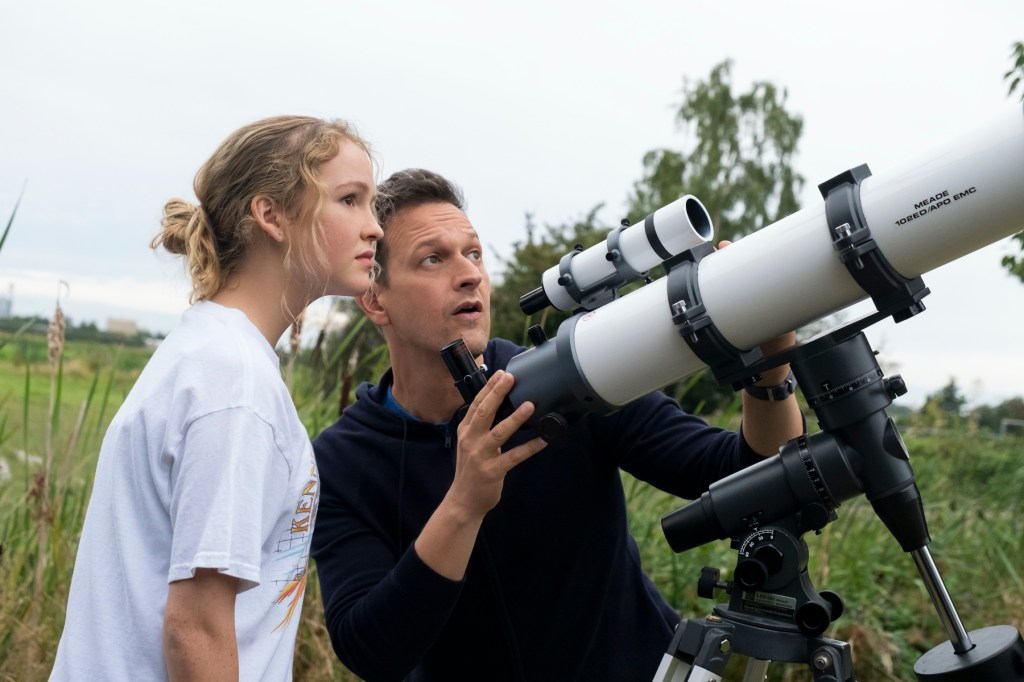 Even in space, Emma suffers from the Protagonist Problem, where Swank is asked to be a stoic all-American go-getter, while the actors playing the international crew — including Ray Panthaki as empathetic flight surgeon Ram and Ato Essandoh as rookie British-Ghanian (and Jewish) botanist Kwesi — are all given more complicated and dynamic characters to play. They also have senses of humor, whereas Emma can come across as a rigid scold; her crewmates try to cope with one potentially lethal crisis by cracking fatalistic jokes, until Emma complains, “What’s so funny about dying?” Comedy isn’t necessarily at the top of Swank’s impressive skill set, but a facility with gallows humor tends to be something most top pilots pick up, particularly ones good enough to lead a mission to another planet. Emma is meant to be extremely focused and admirable, but can come across as more robotic than Yu.

While we see a bit of Misha and the others’ families in the present day, we mostly get to know the crew via Lost-style flashbacks, some of them recent, some as far back as an illness Ram barely survived as a young boy. It’s a smarter way to break up the mission scenes and deepen the other characters, but the crew are more compelling than Emma to begin with. In particular, whenever the story turns to Yu and the various burdens she carries as a female Chinese national, it becomes hard not to wish that she were the central figure of the drama, rather than an emotional counterweight for our actual heroine. 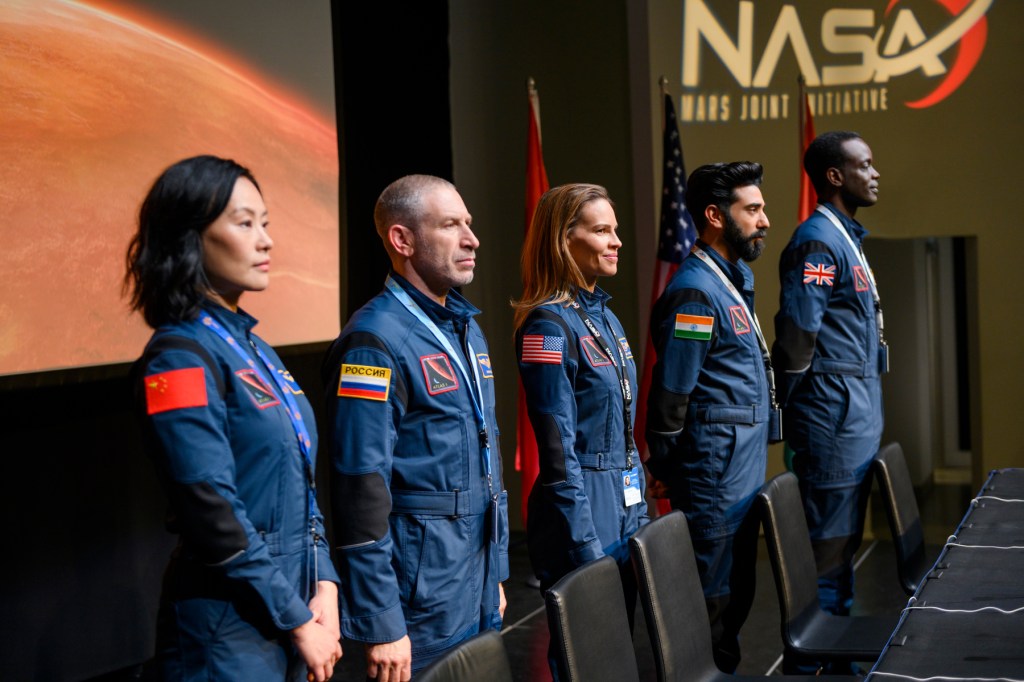 But Wu and the other astronaut actors are all very strong, as is Away as a whole whenever it focuses on mission complications and crew dynamics. Like The Crown, Away manages to smartly incorporate a Crisis of the Week approach, even for a binge-release streaming show, while also varying the degree of said crisis. Sometimes, the crew’s lives are in danger, while at others, it can be something as relatively minor as the garden Kwesi is preparing to plant in the Martian soil. But there’s always a problem to be solved through ingenuity, duct tape, and a bit of what Tom Wolfe once described, regarding the Mercury 7 astronauts, as “the Right Stuff.”

Later this fall, we’re getting NatGeo’s own Right Stuff series, along with the Showtime comedy Moonbase 8 with John C. Reilly and Fred Armisen. Those shows and Away are joining a crowded TV space race that also includes Apple TV+’s For All Mankind and Netflix’s Space Force. I remain, as always, a sucker for anything even vaguely NASA-themed, but also for the kind of nuanced, hyperemotional family drama that Goldberg and Katims did on a show like Parenthood. Away only gets the space half of things right, but it often gets that half very right.