Carole Baskin wants to make it clear: She’s just as eager to find out what happened to her ex-husband as the rest of the world.

Baskin, the owner of Florida animal sanctuary Big Cat Rescue, saw her former marriage thrust into the spotlight over the summer, after she was featured in the Netflix documentary, Tiger King. Though the series focused primarily on her contentious relationship with rival zookeeper, Joe Exotic, Baskin became the target of internet sleuths and real detectives alike after the show revealed that her husband, Don Lewis, vanished without a trace in August 1997 after leaving their Tampa home. An episode of Tiger King — and interviews with Lewis’ family and Exotic — seemingly infers that Baskin may have had a hand in her husband’s disappearance.

The now-remarried Baskin has maintained her innocence all along, and she has not been charged with a crime. Still, the cold case made headlines again this week after Lewis’ family pleaded for tips in a commercial they paid to air during Dancing With the Stars, which features Baskin as a contestant on its current season. Baskin, who says she received a text informing her of the commercial “ten minutes before [her] first performance,” admits the commercial was a distraction, but says she’s hopeful that any leads can bring closure to Lewis’ family — and herself.

“Twenty-three years ago, I offered a $100,000 reward with no result,” she tells Rolling Stone. “What I think people do not realize is that there is NO ONE who would more like to see someone come forward with information than me, because solving the mystery will end the lies and innuendos aimed at me.”

Baskin insists she’s not the villain she’s been painted out to be, and she’s hoping her latest return to the spotlight will help show America a different side to herself. Speaking to Rolling Stone on the occasion of her new charitable face mask collection, Baskin accuses the producers of Tiger King of purposely portraying her in a negative light.

“In Tiger King, the producers basically presented three overarching lies,” she says: “One was the way they presented, as a sympathetic victim, a man who walked up to five beautiful, healthy tigers and blew their brains out with a shotgun. The second was portraying Big Cat Rescue and all sanctuaries as if they were equivalent to roadside zoos. The third,” she says, “was making me out to be the villain instead of the person fighting to stop the abuse.”

Baskin, who claims producers had told her they were making the “Blackfish of big cats” (referring to the 2013 documentary about whales forced to perform in captivity), says she’s now hoping to use her stint on Dancing With the Stars to reframe the narrative around herself, while continuing to bring awareness to the “plight of big cats.”

“There are millions of people, particularly those who know of our decades of advocacy, who saw through the lies, but for the majority, Tiger King is all they know of me and Big Cat Rescue,” she says. “I hope people will see the smiling enthusiastic person that I am and perhaps at least have some level of appreciation for the guts it took for this introvert to step out of her comfort zone and do this, even in the face of so much hate and adversity.” 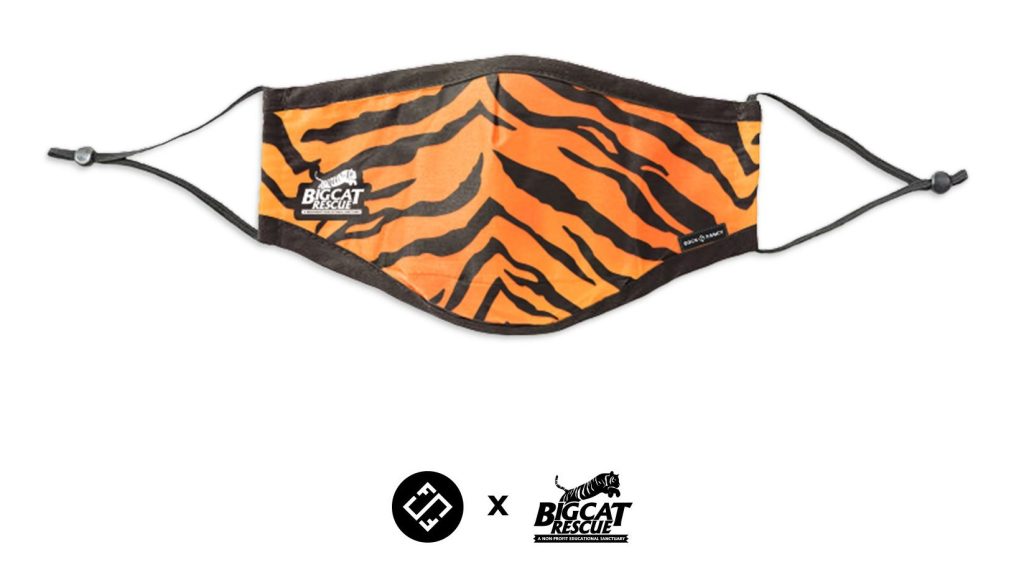 The desire to preach “love and kindness” is something that also inspired her latest project, a charitable face mask collaboration between Baskin’s Big Cat Rescue, and the accessories site, Sock Fancy. The new collection features three different “Big Cat”-inspired designs, printed on a soft cloth face covering. The non-medical face masks are made with three layers of fabrics, with adjustable nose clip, ear loops and a chin guard. For every mask sold, Sock Fancy says they will donate a mask to someone in need. The company says it has already donated over 100,000 masks to first-responders and community aid organizations since the coronavirus pandemic started.

While Baskin has been largely isolated while filming the current season of Dancing With the Stars, the Florida native says the pandemic has severely affected Big Cat Rescue, with the cancellation of in-person tours causing a 30-percent dip in revenue over the last few months. “Having to close for tours meant painfully having to lay off half our staff,” she reveals. “Howie [Baskin, her husband] and I are not taking any salaries, and eliminating discretionary expenses in order to operate in the black on just the donation revenue.” Still, she adds, “We are successfully doing that so far thanks to our donors stepping up in rather amazing ways.”

As for the renewed backlash she’s received from being on Dancing With the Stars, Baskin says she hopes viewers can put aside their judgements, and give her a chance. “Everyone benefits from showing love and kindness and working together,” she says. “I think this applies at the micro level to our spousal and other family relationships, and at the macro level to the problems we face as a nation and a world.” And she adds, “Showing kindness to animals as a society is a wonderful place to start.”