The 72 annual Emmy awards dropped their nominations in a very 2020 way this morning: four people talking over each other on Zoom and with plenty of surprises. Unlike most years, there were some honestly unexpected choices made by the Academy, including Best Series nods for The Mandalorian and What We Do in the Shadows. Plus the expansion of several categories to include more nominees led to some fun acting choices too. Of course, they still couldn’t get it completely right. For every wonderful choice (Zendaya! Shira Haas! Ramy Youssef!), there were a few outright headscratchers. Here are a dozen of the biggest WTF snubs.

The Morning Show for Best Drama
Apple TV spent a literal fortune on their crown-jewel drama: a fictional look at a morning talk show with some very nonfictional inspirations. From the day it launched, this felt like the kind of star-studded, multimillion dollar offering that the Academy nominates across the board. They did cite the work of Steve Carell (Outstanding Actor — Drama), Jennifer Aniston (Outstanding Actress — Drama), Mark Duplass and the series-stealing Billy Crudup (both Outstanding Supporting Actor — Drama). And then they skipped it in Best Drama for… Stranger Things? And The Mandalorian!? Expect a few MacBook Pros to be thrown out of Silicon Valley windows in frustration today.

Bob Odenkirk & Rhea Seehorn for Better Call Saul
The Academy may need to hire an attorney to explain this one. (That, orr someone should just call Gus Fring.) Despite the fact that he’s been nominated for the past four seasons of AMC’s critical darling, Bob Odenkirk wasn’t among the names shouted out when the Best Actor — Drama nominations were listed; if there had actually been anyone at the presentation besides Leslie Jones, there would have been gasps. And while we’re tragically accustomed to Rhea Seehorn missing out for one of the best performances on any show in the last decade — it’s become such an unfortunate tradition that it would more shocking if she actually did get nominated now—it didn’t make her ommission this year (especially after her turn in Saul’s stellar recent season) any less painful. Digging into the arc of Jimmy McGill as he actually became Saul Goodman has allowed Odenkirk a chance to do some of his most nuanced work, and Seehorn matched him scene by scene. Now they’re partners in snub history too.

Merritt Wever for Unbelievable
The acting categories for Limited Series/Original Film were undeniably crowded, but it felt like this one was a lock. After all, it was one of the most acclaimed shows anywhere in 2019 and enough voters saw it to nominate it for series and supporting actress (Toni Collette). So how on Earth did they not also nominate Merritt Wever, whose complex, subtle portrayal anchors the entire show? She was the heart and soul of this Netflix drama, which turned a procedural about a serial rapist into an empathetic look at how our justice system treats such cases. Were voters so angry about how Run ended that this was their revenge?

Tom Pelphrey for Ozark
Emmy voters love Ozark, nominating their annual trio of Jason Bateman, Laura Linney, and Julia Garner — yet they somehow forgot the man who really provided the emotional throughline for the best season yet of this Netflix hit. As Uncle Ben, Tom Pelphrey found a way to make his character’s mental illness feel genuine instead of manipulative, especially in a final stretch of episodes that he virtually stole from the rest of the cast. Pelphrey is going to next appear in David Fincher’s Mank, and feels right on the edge of breaking through as a household name. His future fans will wonder what happened here for years.

The Plot Against America for Outstanding Limited Series
We’re convinced that the Academy has long had a plot against David Simon, after years of watching The Wire being called one of the best dramas in history only to be entirely ignored by the Academy. And lo and behold, the same thing has happened with his critically acclaimed adaptation of Philip Roth’s novel. A masterful allegory about what happens when we look the other way in the face of evil, The Plot Against America missed absolutely everywhere, notably in the Best Miniseries Category — but also regarding the truly great turns by Zoe Kazan and John Turturro as well. It must have hit too close to home for voters this year. In a sense, we can’t blame them.

Better Things for Outstanding Comedy
It was arguably the best season yet from Pamela Adlon’s critical hit on FX, taking its genre-stretching examination of how adults balance parenthood and their own lives into some bold, brilliant territory. The Emmys have never really known what to do with this show, however, and it really should be all over the nominations this morning — including at Comedy and Best Actress — Comedy for Adlon. Things are never going to get better for this show regarding the Emmys, are they?

Aaron Paul for El Camino
Jesse Pinkman used to be an Emmy darling! Aaron Paul won three Emmys for playing the part that he returned to in this Netflix original film follow-up to the story of Breaking Bad. In El Camino, Paul does the best film work of his career, adding new layers of regret and trauma to a character that everybody thought they knew so well. Debates about the success of the film overall and whether or not we actually needed it can rage on, but even critics of this movie never argued about how much Paul brought his A-game. We realize it was a very crowded category. This still feels like a crime.

The Great for Outstanding Comedy, Actor, Actress
The Favourite writer Tony McNamara returned to the world of misbehaving royalty with this razor-sharp, hysterical Hulu comedy that features some career-best work from Elle Fanning and Nicholas Hoult. As Catherine and her morally bankrupt new husband Peter, the duo are perfectly cast in a show with a brash silliness that belies how incredibly smart it can be. Perhaps watching beautiful people act rich and spoiled didn’t feel like something worth honoring in the dumpster fire that is 2020 (although that doesn’t explain Succession‘s domination in the nominations), but it still feels not-so-great to see this show miss out so completely.

James Marsden for Dead to Me
Who does an actor have to kill to get some attention on this show? Over two seasons, James Marsden has played not one but two characters, the slimy Steve Wood and his kinder brother Ben. Sure, the twin twist felt a little like something out of a soap opera playbook, but Marsden sold it beautifully, making Ben feel not like a retread but a whole new character in Season Two. Emmy voters love the show, nominating its two leads this year and picking it for series, but they again snubbed the supporting actor who has provided the background for their great performances. Does he have to play a triplet in Season Three? 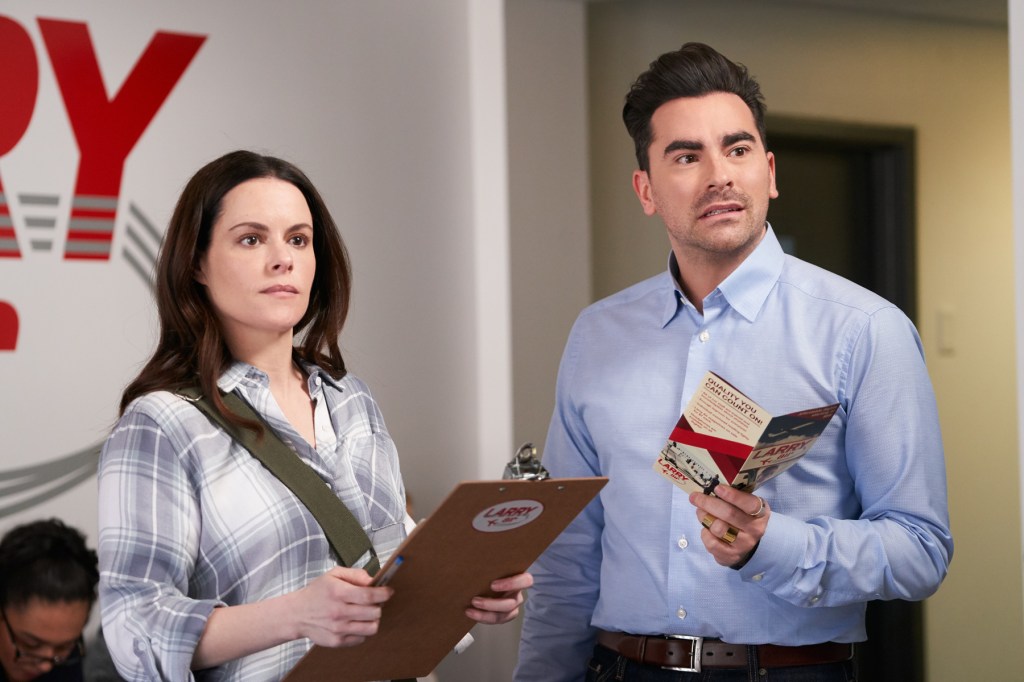 Emily Hampshire for Schitt’s Creek
We love you, Stevie! The love affair that the Emmys started with Schitt’s Creek just before it came to an end paid off this year with the Canadian sitcom becoming one of the most nominated comedies of 2020, landing nods not only in series but in each of the acting categories for Eugene Levy, Catherine O’Hara, Daniel Levy and Annie Murphy. And yet it still stings a bit that Emily Hampshire wasn’t invited to the party. She may not have had as showy a role as the Rose clan, but she was a calming straight man presence from first season to the last, balancing each of the four scene-stealers. It would have been nice for her peers to recognize that actual support with a nod.

Elisabeth Moss for The Handmaid’s Tale
This one is more shocking from an Emmy history standpoint than anything else. Yes, most people agree that Hulu’s former winner for Outstanding Drama has been on a slide since it took that prize. But how does the show get nominated for series and its leading lady not get a matching invite to the ceremony if voters think that this show is strong enough to possibly be named the best of the year? It just doesn’t make sense to not even nominate the actress who carries it in every way.

Cynthia Erivo for The Outsider
The HBO’s series probably seemed like awards-circuit catnip at one point, what with its high pedigree behind the camera and major stars in front of it. The mixed response made it feel less likely to pop up across the board this morning, but there was still hope that the best thing about this Stephen King adaptation would find a way to become an Emmy insider. Cynthia Erivo took a part that could have been all tics and personality quirks and made it the anchor of the show, the person who first discovered that evil takes many forms. It took a new one for fans of this show this morning.