Singer/guitarist Blake Scott talks to us about the Melbourne band’s upcoming national tour and prepping their new album.

Would you describe your live shows has been drastically different from listening to the record?
It is different. I mean I think every performance is its own entity so to speak. You know you have a different crowd every time I can think that some of our crowds are very different, so between Brisbane, Sydney, Melbourne and then you know the times we’ve been overseas the crowds are a little different there as well. I guess that changes things a little bit and I guess there’s certain things you know some shows that play a little quicker or a smaller club show where’s there’s not much space. It just makes things a little gnarlier. I think we’re always roundabout on the mark but there’s always room for a little movement and I think that’s what keeps it interesting for us.

With the new national tour starting this week, what can fans expect?
So we’ve already done the full record tour — that was last year. This one’s just for another single off the record, but I think now we’ll sort of go into the back catalogue a little. With this record a lot of new people have come on board who probably haven’t heard the first album and the EP so we get to go back through that a little bit more and take people back and see if we can pique their interest with that sort of stuff. We’ve been demo-ing a few new ideas so maybe we’ll try some of those out before the end of the tour and just sort of get a bit of a gauge on how the new stuff’s gonna go, if it’s gonna go at all [laughs].

What does your uniquely Australian reputation mean to the band and your sound?
It doesn’t really mean a great deal to the band. I mean originally when we started we probably felt like, you know the first album is a little more European in a sense. You know, it didn’t feel like an outwardly Australian record. This one [2014’s Tales] was certainly more ‘Australian’, just because the setting had changed. We were spending a lot more time outdoors, we had a different studio. Whereas the first studio was very dark and there was no sort of outside area, while this one we spent a lot of time when we were writing the record just having few beers in a barbecue area and there was a lot going on in Australia politically with Abbott being elected — which is an abomination really and I guess there was this real feeling of resignation. I wouldn’t say it was a political album but it was a time where I guess we felt Australian just because we were really confronted by what was going on. I just think it was a very Australian sort of attitude that was coming out on the record. Sorry, I do tend to ramble. What does it mean to us? It doesn’t mean anything for us to be a particularly Australian band. We’re a band and we’re from Australia. You know, the next record might not be as ‘Aussie’, but who knows.

What effect do you see the current political environment having on your Australian ‘larrikinism’ vibe?
A little bit. As I said, there’s not too much directly political on there, but I think that is actually a very Australian thing. When you’re not happy about something or somethings not going well you just make a bit of a joke about it you know and I think a lot of people hide their displeasure or pain by having a bit of a joke and making light of a situation that’s probably quite dark or causing them a bit of turmoil. 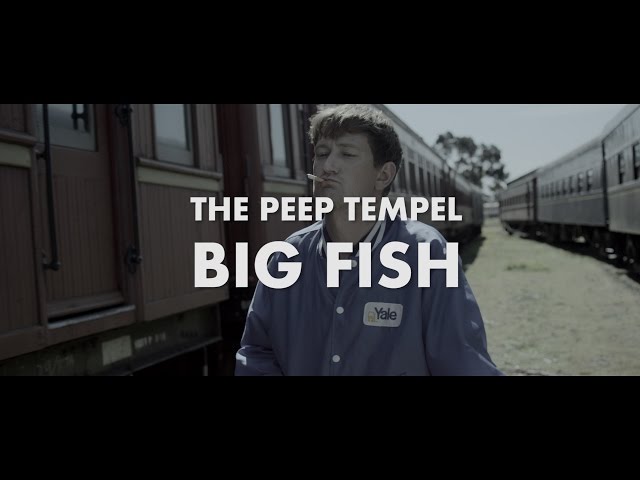 Any great touring stories you’d like to share?
I was thinking about this earlier today. Not much happens, we’re pretty boring [laughs]. Jimmy once ate a green mango, which was you know pretty funny. He bit into it thinking it was an apple which yeah, but that’s probably the worst rock and roll story ever to tell. Look we just sort of cruise around we get there, we unload, we go to play, we have some beers and we meet some people. Actually, we played in a squat in Europe called Fischladen which was amazing. I had some guy lick the sweat off my arm which was quite bizarre, but yeah the rest is pretty boring I hate to say.

Even when filming the music videos?
The last one [“Big Fish”] was pretty heavy — spending the day with a dog, a little dog that just doesn’t really want to be around you. You know 10 hours holding on to him with a leash. It was pretty hard like this dog was giving me looks like it was such a deep sadness. I just wanted to give him back and shut everything down. It was causing him great pain. I guess we have a lot of fun with everything we do, but as for stories it’s yeah. Usually I’d make something up, but that’s not even coming to me at the moment.

You guys were short-listed for the Australian Music Prize earlier this year, what does this mean to you guys?
Look it was very flattering, and it was a real achievement for us. You know the company we were in, there were some really great bands in there. We didn’t sort of think we were in the running really or anything like that so to go up there and get free beer and free food – I actually can’t really remember a great deal of it [laughs] but we had a good time. I mean thankfully the actual party only went for 2.5 hours otherwise it could have gotten a bit dangerous for us. We ended up somewhere, I’m not really sure where, but I just woke up in the morning and had to run to get on the plane. It meant a lot to us to get that nomination it was something that was very unexpected and something we’re very proud of.

What’s next for The Peep Tempel?
We’re working on some new material at the moment which seems to be a little bit, I wouldn’t say different again, but it’s certainly its own thing. We’ll be working towards another record and getting back overseas. Hopefully getting to the states later on this year. We’ve got a lot of plans and hopefully I’ll have a few more stories for you, touring stories [laughs].

Any indication of the direction of this new material?
At the moment there’s probably a few songs that are probably a little slow. I don’t know whether it’s just ageing gracefully or we’re just getting a little soft. I think we’ve done about 6 songs, 2 of them are pretty good and they’re pretty full on and the rest of them are pretty laid back. I think we’re getting in there and just having a bit too much of a chill, so we might pick one of those and ditch the rest. But yeah it’s at the moment it’s very very lethargic, but there’s still some more upbeat stuff there so which is probably the direction we’ll head in.

The Gettin’ On By Tour kicks off this weekend in Sydney: