The first hint that this year’s Splendour In The Grass was going to be a spectacle unlike previous years comes early.

Melbourne rockers Kingswood are on the festival’s main amphitheatre stage early Friday afternoon performing their high-octane brand of rock ‘n’ roll with a beefed line-up of horn players and backing singers. Halfway through their set a pair of streamer cannons blasted winding strands of yellow paper over the crowd. The explosion drew an equal reaction of shock and delight from the thousands of fans that had amassed in the surprisingly intense winter sunlight, rewarding them for their early commitment with a piece of stage craft that just a few years ago was really only the domain of headline acts like the Flaming Lips or Coldplay. The band would go on to reinforce that big stage moment with a huge performance of Destiny’s Child’s “Say My Name”, before finishing off their set with two more confetti cannon explosions; red and white rectangles raining down upon the mosh pit as the driving bass riff of “Creepin'” pumped along.

These seem like bold moves at the time, but they would serve as just the tip of the iceberg that would develop into a trend across the weekend, with local acts stamping their presence on the annual Byron Bay festival.

2017 will be recognised as the year where local acts would raise the bar, not only for themselves but also for their more fancied, bigger-name international counterparts. It started with Kingswood, but was later that night pushed to the limits by electro duo Peking Duk, who transformed their DJ set up into a mammoth live instrument act, with even more confetti and streamer cannons, matching Kappa tracksuits and a surprise appearance from UK singer Aluna Fracis of AlunaGeorge fame to perform her PD-collab “Fake Magic” for the rapturous crowd. 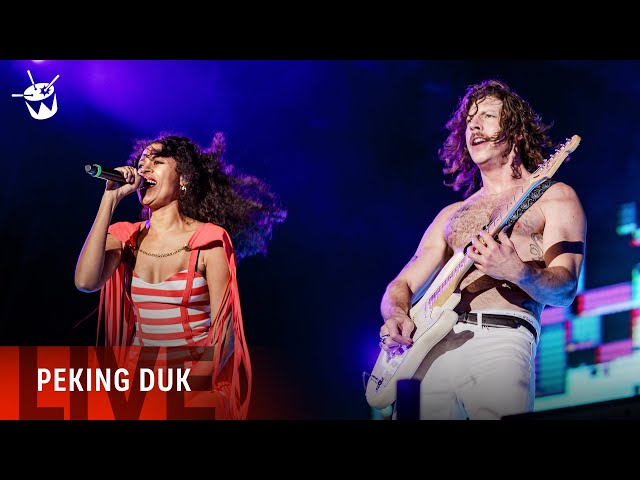 Saturday opened with a charming performance from rising Brisbane teen star Mallrat. After her opening track “For Real” she stood for a full minute, lapping up the cheers of the joyous early-bird crowd. The combination of her uninhibited stage presence and a surprise guest appearance from Sydney producer Oh Boy — assisting with latest single “Rush Hour” and glitchy pop jam “Bunny Island” — made for a set that was wonderfully unique and fresh for an artist playing her first Splendour.

Her endearing casual approach was then followed by the well-rehearsed Confidence Man, who have pulled increasingly energised crowds in recent months after footage of their commanding performance of “Boyfriend (Repeat)” at this year’s Golden Plains festival went viral. Their modern take on house doesn’t have a huge amount of depth, but their live shows are total dance-a-thons. 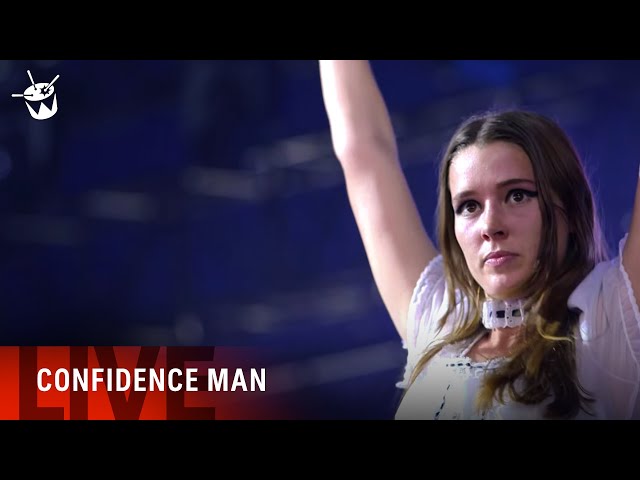 Meanwhile, a stage away Sydney’s Middle Kids were delivering on next-big-thing expectations, as they packed out the G.W. McLennan stage with fans clambering to hear songs like “Your Love”, “Never Start” and “Edge Of Town.” Although they lacked the showmanship and spectacle of many of their counterparts, it was a performance that will continue to build their reputation as some of the best new songwriters in the country, with fair comparisons to the likes of Feist, Sharon Van Etten and our own Go-Betweens and Triffids.

Tasmanian punks Luca Brasi are one of the hardest working bands in the country and it was just rewards for them to have their Splendour main stage moment, where they thundered through a tremendous collection of songs from their 2016 pearler of an album If This Is All We’re Going To Be, including “Anything Near Conviction” and “Cascade Blues” as well as their widely championed cover of Paul Kelly’s “How To Make Gravy”, which they would later the same weekend finally release a recorded version of online.

Dune Rats aren’t exactly a band that has reinvented the wheel in terms of their music – and in all honesty the trio play a pretty mindless brand of pop punk. However, they deserve be acknowledged for being the best marketed act in the country and that was no more on show than at Splendour. Their entrance on dirt bikes, a giant shakka statue, giant inflatable beer cans, a guest appearance from Grinspoon icon Phil Jamieson for a cover of the Grinner’s “Just Ace”, and a push on a gigantic “Do Not Touch” button prop to fire off even more confetti cannons was utterly ridiculous, completely over the top, probably insanely expensive and undeniably one of the most entertaining sets of the entire festival. In many ways they feel as close to an act like Kid Rock as an Australian band is going to get, but they know their audience and they have transformed their three chord confectionary into something much more than the sum of its parts.

Undoubtedly what will be the most remembered moment of the festival will be the reunion of four-fifths of the mighty Powderfinger during their former frontman Bernard Fanning‘s main stage set. The legendary Brisbane rockers blasted a rollicking version of their 2003 Vulture Street cut “(Baby I’ve Got You) On My Mind”, before a tender performance of their 1998 anthem “These Days.” The crowd’s reaction was justifiably huge, and when Fanning’s regular touring band returned to the stage to finish off his set with his own hit “Wish You Well” there was a spark in the air that ignited expectations of anything could happen for the rest of the festival.

Later, it was veteran troubadour Paul Kelly that was stealing crowds from major internationals Queen Of The Stone Age and Two Door Cinema Club, whose acclaim might be far reaching, but in many ways didn’t feel a match for a man who’s written a fair chunk of the best Australian songs of all time. QOTSA may have had the swagger and Two Door the vibe, but there weren’t many dry eyes in the house when the gentle soul that is PK lead the GW McLennan tent in singalong after singalong.

Queens of the Stone Age

Sunday is traditionally a day where the crowds ease into proceedings with weary heads from three days of partying, but they didn’t get the time to adjust this year with the stabbing punk rock of Melbourne’s most dangerous band in the Peep Tempel bashing spiking awake. There’s no way Trevor is still with “Carol” these days if the way they tear through the crowd with what in many ways has become the trio’s anthem is anything to go by.

Amy Shark in the meantime was swelling the the GW McLennan tent until it was bursting at the seems as the “Adore” singer capped off what has been a massive 12 months that has seen her emerge from being an unknown battler and become one of the biggest names in local music.

Sydney bass producer Moonbase, on the other hand, has one of the most international sounds of any Australian on this year’s bill, as showcased by his genuine banger and set closer “It Don’t Matter” featuring the guest vocals of US superstar Aanderson .Paak. He again received a boost from a guest appearance from Melbourne vocalist Ecca Vandal, who helped deliver the goods on the duo’s 2016 collab “Oblivion.”

It would seem as though The Smith Street Band have finally outgrown their dorky punk image and their main stage performance (their second in just a few years) saw them in many ways realise their potential as a genuine heavyweight Australian rock act. “Young Drunk” is taking on the kind of prestige of the Drones’ “Shark Fin Blues” these days, and their recent radio fame for records Don’t Throw Me In The River and More Scared Of You Than You Are Of Me saw them able to pull on a depth of tracks that had the crowd belting out the lyrics. Closing out with “Death To The Lads” (with an appropriately light pink confetti cannon burst), the “Don’t Throw Me In The River” title track and finally a cover of Nirvana’s “Territorial Pissings” was a three-punch combo that clearly left the crowd reeling.

A powerful showing from A.B. Original in the Mix Up tent stood out as an incredibly important moment (not just in the context of the festival) but in light of the recent news surrounding the killing of teenager Elijah Doughty. They were already the most politically charged Australian act in a generation, but their display of Doughty’s image throughout the set added weight and emotion to the duo’s already celebrated lyrics. On top of that, they were also joined by guest stars Dan Sultan and Paul Kelly to recreate their rendition of PK’s “Dumb Days.”

Client Liaison‘s gimmicks and schtick might be derided in some circles, but their popularity can’t be questioned. The duo have re-appropriated many of the formally culture-cringed elements of ’80s Australiana with a flair that has seen their cool reinstated. Their Ken Done/Mambo-worthy aesthetics were complemented by the distribution of actual cans of Fosters (who knows where they got those from), an actual cardboard “Off White Limousine” and yet another surprise appearance, this time from inimitable Tina Arena for a performance of her classic “Sorrento Moon.” Once again, fantastically over the top, but perfectly on trend for Splendour 2017.

A triple threat of GW McLennan stage acts in Pond, Meg Mac and King Gizzard And The Lizzard Wizzard — as well as a jaw-dropping performance by UK grime king Stormzy in the Mix Up tent – all contributed to what would sadly be a bomb set from Icelandic post-rockers Sigur Ros, who performed to a largely empty mainstage crowd, reflecting just how potent the rise of the local scene in recent years has become.

And although the novelty of the reformed LCD Soundsystem closing out the festival was always going to be a drawcard, their set seemed long and stale in comparison to the unbelievable showing that had been put on by so many great Australian acts across the weekend. We ended the night dancing ourselves clean with all of our friends, but the joy and pride we were experiencing had much more to do with Sydney, Brisbane and Melbourne than it did New York city.

Of course the international majors had brought their well-earned reputations and brilliance to the festival – Father John Misty, QOTSA, Haim, Royal Blood, The XX, Maggie Rogers, Stormzy, Oh Wonder, Bishop Briggs and Bonobo were all incredible. However, Splendour in the Grass 2017 belonged to the home-grown talent. And for those big overseas acts coming to play in the future, you’d better bring you’re A-game, because we’ve got more than a few tricks up our sleeve (not to mention a lot of confetti).