The members of rollicking Philadelphia group Sheer Mag literally wear their influences on their sleeves: Vocalist Tina Halladay can often be seen sporting a denim vest studded with pins repping Thin Lizzy and AC/DC, signifying the way the band’s riff-heavy yet thrillingly compact and catchy songs are bringing old-school rock values back to modern lo-fi punk.

Sheer Mag’s recent hype-free ascent is an anomaly in modern indie rock. The band has neither a presence on social media nor a publicist. They helm their own merch table, where you can purchase Grim Reaper-esque Sheer Mag action figures “draped in the finery of rock n’ roll” (meaning their band logo). And while they can still be found gigging in DIY venues across the U.S. and Europe, they also played Coachella in April and will appear at Barcelona’s Primavera Sound in June. The band has reportedly been courted by major labels eager to back their first full-length (their discography to date consists of three seven-inches, each containing four excellent songs), but they’ve turned them down, preferring to stay rooted in the homegrown scene that spawned them.

On a recent Saturday, the Market Hotel – a DIY venue next to an elevated subway in Bushwick, Brooklyn – bustled with longhairs and leather-jacket-clad punks waiting to see the group. Before Halladay could get onstage to unleash her throttling, soul-inspired vocals to the sold-out crowd, she had to take care of some personal business. “Hold on,” she says, moments after meeting up with Rolling Stone. “I have to go say hi to my mom.” Halladay, who hails from the New York area, hugged her family members in line and posed for photos with them. When she returns, she’s holding a new pin she procured in the past few minutes: This time, it’s one her mom made. “It’s a really weird photo of us – I don’t know how she got it,” Halladay smiles. “It’s me and two of the guys in my band. She cut everyone else out of it, I guess, though. She’s so bad at making pins.”

Halladay took some time to discuss Sheer Mag’s Coachella experience, the band’s Philly HQ and how guitarist Matt Palmer is her Robbie Robertson.

You all just performed at Coachella. Was it what you were expecting?
It was … weird [laughs]. I mean, we were there the day we played and were all taken care of. It was really fun to play there. It was so loud; it was sick. It’s funny because I can’t wear it as a joke, but Matt [Palmer, guitarist] was wearing the flower crown we found on the ground there. It’s like, “Goddammit.” I wish that were funny for me to do. But it’s, like, not.

Was that the biggest show Sheer Mag had played to date?
Definitely the loudest [laughs]. The first weekend they were having a problem with the wristbands so not that many people were able to see [us] … besides VIPs, they didn’t let people in until 15 minutes into our set. I feel bad for people who played at 11 and stuff, cause nobody was there.

Can you tell me about recording at the Nuthouse, in Philly?
Well, we all moved in together, with some other people, into that house. It was like six or seven roommates. So Hart [Seely, bass] and Kyle [Seely, guitar] lived on the top floor, and had a door that opened between the rooms, so we recorded the first seven-inch in those rooms. I was never there when they did instruments. I mean, I was in the house but not in the room.

Me and Matt still live there; they don’t. It’s just our home base. Big house. Bunch of roommates, all our friends we love. It’s our family. 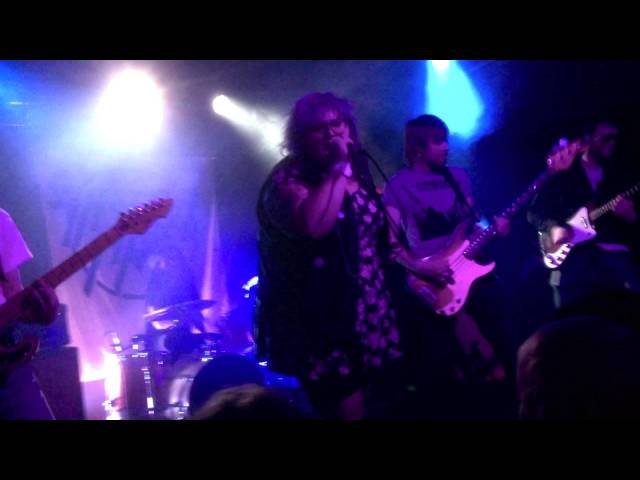 Your recording sound pretty gritty. Is that done consciously or out of necessity?
Probably a combination of both. I really can’t speak to … That isn’t really my deal. It’s Hart – him and Kyle record all the instruments together. Then they come to me and Matt to do what we will: you know, the lyrics.

Is writing lyrics a collaborative process between you two?
Me and Matt? It is sometimes. A lot of the time it’s whoever’s feeling like [it]. … Everybody goes in and out of modes where they want to write a lot. I am very bashful about writing. In my old band, I never really wrote. I’ll contribute a verse here and there. Most of the time, it’s Matt writing from my perspective, and we’ll talk about it before.

What makes you feel bashful about putting your own songs out there?
I’m not as experienced in that. I do write some stuff, but it’s easier for me to speak through … I will write, if I can. But I think it’s easy for us to both work in that way. For him to not write from his perspective is a freeing thing. And for me, having someone I can explain … Well, it’s not just me with these ideas. But it’s nice to have someone say things that I maybe can’t.

Like with the first record, some of those songs like “Hard Lovin.” Some of those lyrics are very, like … I don’t know the word I want to use. Maybe I come off as more egotistical than I actually am. I can’t say those things myself. I need someone to say it, or help me say it.

Do you feel like yourself when you’re singing those words, or does it feel like you’re playing a character?
I mean, I know that when I’m at my best, that’s who I am. But I doubt myself. When people are, like, whispering near me at a show, I’m like, “Are they talking shit about me? They’re not going to come over and say hi?” And they’re like, “Can we get a picture with you?” And I’m like, “Yes!” I sometimes don’t remember that people probably like me if they’re coming to see me play. I’m still defensive.