This year marks the 25th anniversary of Sublime’s self-titled LP, which wound up being their final release before the death of frontman Bradley Nowell. They’re celebrating by releasing the graphic novel, $5.00 at the Door, on August 14th.

Written by Ryan Lady, the comic traces the group’s entire history from their early days on the California club scene to the recording of 40oz. to Freedom and Robbin’ the Hood to their breakthrough to mainstream success shortly before Nowell died from a heroin overdose.

Here’s an exclusive excerpt from $5.00 at the Door that chronicles the group’s 1995 stint on the Vans Warped Tour. They were playing to some of the biggest crowds they’d ever faced, but they couldn’t help but test the patience of the organizers at every turn. Drummer Bud Gaugh was busted by the cops for Vicodin possession, their pet Lou Dog attacked a fan, and they missed many sets due to epic hangovers and the fallout from Gaugh’s arrest. 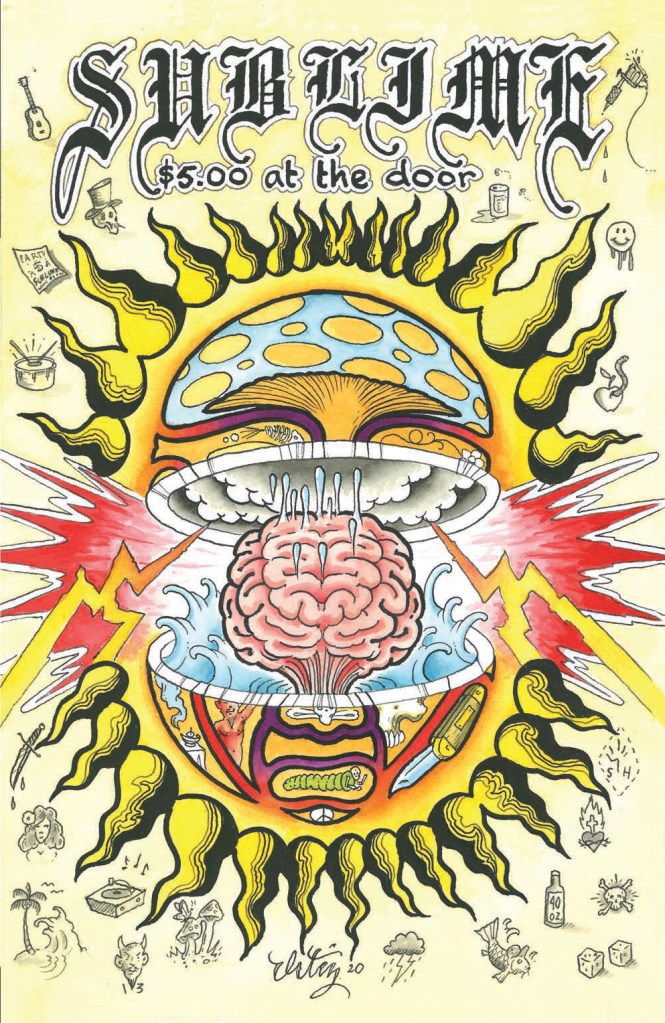 5 Dollars At The Door cover

They were eventually kicked off the tour, brought back for the Northwest leg due to fan demand, and then kicked off yet again. Things were quite different for tour mates and longtime friends No Doubt. They not only did vocal warm-ups before each show, but they did actual calisthenics to get pumped up while the guys in Sublime nodded off on nearby couches.

“But no one could deny the two bands had onstage chemistry,” writes Lady. “Fans even insisted that Brad and Gwen Stefani nurtured a mutual crush. Those rumors turned out to be incorrect. The attraction between the two lead singers was purely professional. At least, as purely professional as anything could be, where Sublime was involved.”

Sublime broke up after Nowell’s death, but surviving members Eric Wilson and Bud Gaugh teamed upon with Rome Ramirez in 2009 and began playing shows as Sublime with Rome. Gaugh walked away from the project in 2011, but Wilson and Ramirez continue to tour.