As the lights dimmed on the expansive open-air pitch of the Forum in Barcelona’s San Adrián de Besós district, the cool Spanish night grew pregnant with expectation. But there were no chants of “Radiohead” erupting from the crowd. There were no odd yelps or screams or spontaneous hollers. Instead there was only darkness. And silence. It was less like a headline festival slot heading into its peak, and more the still unease you feel before the priest takes the alter for Sunday mass.

It seemed like the entire city of Barcelona had come to receive communion, and not a soul wanted to ruffle the frock of the notoriously irritable Father Thom Yorke. Then the black stage glowed red, and the initial tense, building chords of “Burn the Witch” emanated from Jonny Greenwood’s guitar.

In front of me, a young blond girl collapsed to the floor, knees folding like a house of cards. Evidently she was overtaken by the bends. Behind her, Yorke warned into the mic:

This is a roundup. This is a low-flying panic attack…

The Most Important Band In the World from there proceeded to play the first half of their new album, A Moon Shaped Pool, in sequence, and then moved onto another set of tracks from the middle part of their long and storied career, including Kid A‘s “The National Anthem” and The King of Limbs‘ “Lotus Flower”. And while the audience remained attentive, consuming metric tons of Heineken and hand-rolled cigarettes between friendly chats, it wasn’t until the lullaby tones of “No Surprises” from their landmark album OK Computer — the opus singularly most responsible for converting the masses here today — washed over the crowd that everyone truly engaged, and the entire concert shifted in mood. When the harpsichord notes ceased and Yorke thanked the crowd, it was his first acknowledgment of the sweaty ocean of humanity crammed before them.

From this point forward the communication between band and audience fortified, and even newer tracks like the environmental disaster warning “The Numbers” felt, well, buoyant. But nothing compares to the reaction from “Karma Police”; when the band finished their hit, the crowd refused to let the exquisite moment end. A chorus of “For a minute there… I lost myself, I lost myself…” echoed across the bay, from the tall corporate buildings along Avenida Diagonal to the breakwater below. No music, just the slightly Spanish accented chorus of paranoia. A single cry of alienation, sung through the lungs of 100,000. 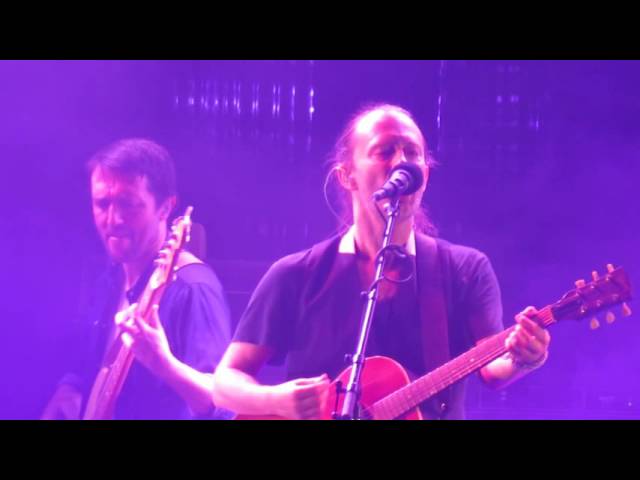 The spontaneous moment morphed into a collective cheer that had even the members of Radiohead clapping along. From the screens behind the band, you could see a smile break across the face of Yorke.

In these moments it’s hard not to get swept up in the enormity of Radiohead, in the opulent cathedral of their lore. This performance at Primavera Sound is Radiohead’s first festival show in nearly half a decade, following only a burst of gigs in smaller venues in London and Paris (Roundhouse and Zenith, respectively). There was such a panic for tickets into these exclusive venues that seats were reportedly reselling for nearly $10k in London.

And the reaction is not much less enthusiastic from their Barcelona fanbase, even though this venue is so much more immense and public. By all reports, those earlier shows enjoyed a much chattier and amicable Yorke, but not so much at Primavera. Maybe it’s the massiveness of scale that shakes the notoriously choleric singer, makes him retreat into the shadows. But this transcendent “Karma Police” moment acted like a drawbridge across the chasm.

The first encore of “Paranoid Android” saw Yorke drop all instruments and clutch the mic in his seizuring canter across the wide stage. When untapped, the singer becomes a force of nature; no one in pop music can say more with a single note. James Blake can affect all the pained falsetto of an Italian opera, and Beyoncé can machine-gun every ordinance of vocal histrionics she can muster from her athletic frame, but nothing emotes more than the tender lilt of Mr. Yorke.

When that single note from “Paranoid Android” rained down from a great height, it played fragile and wavering — and yet it moved as patient and determined and meaningful as a swell crossing the Atlantic.

By the time they bid goodbye for the second time, many in the audience assumed their time with Radiohead had ended, but no one wanted to believe it. And their beloved band rewarded their patience by mounting the stage one last time. But apparently all was not right in their world, and a glitch in the earpieces sent Yorke storming off the stage, moaning, “Ok we’re going back off again.” 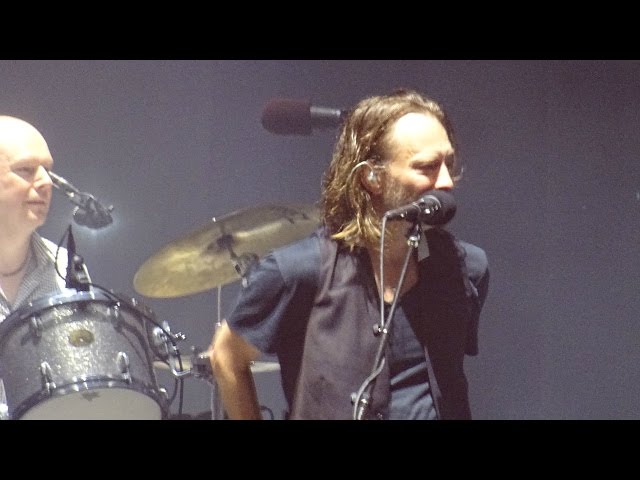 That brief fit wasn’t enough to kill the mood, however, and within a minute he returned to the stage undaunted. And then the clacking beat and arpeggiated guitar notes of “Creep” strummed from the speaker stacks, and the collective disbelief was almost palpable. The anthem that transformed them overnight from an Oxfordshire bar band into globetrotting pop stars has been at times disdainfully dismissed by the group, and their history with the track is troubled to say the least. But at this moment there’s no way to tell: Yorke sings the chorus with the full power he can muster, with not an iota of irony or mockery in his voice.

So much of the deconstruction of A Moon Shaped Pool — and it has been deconstructed, as a Radiohead album is not so much reviewed as vivisected like a marooned extraterrestrial — centers around the pained breakup of Yorke’s 23-year relationship. This can be deduced from many moments, not the least of which is the distorted loop at the end of “Daydreaming,” where the backward-taped vocal repeats, “Half my life… half my life…”. So it seems impossible not to see a more ebullient Yorke bouncing around in front of the stage, bowing before the Stadium Rock Star mantle that he has for so long rejected, embracing the very song that delivered him to evil — and not make some connection. Perhaps in this newfound freedom he has found some rare joy from the melancholy.

As it ended, and the last notes floated across the Barcelona skyline, everyone stood in a state of stunned silence. Just as this whole thing began. A thin British lad in front of me turned around, wide-eyed, and muttered to no one in particular, “that was a hair on the back of my neck moment.” I know exactly what he meant.