Most people in Nathaniel Rateliff‘s position would probably be exhausted at the moment. The 36-year-old Missouri-born singer is on a bus that just traveled via ferry from Calais in northern France to England where he’s slated to perform at the Latitude Festival in Suffolk. Ever since his debut studio record with his soul revival band the Night Sweats landed on shelves last August and he wowed Jimmy Fallon with his confessional song “S.O.B.” on The Tonight Show, his life has been a blur of festival appearances and headlining dates at venues that seem to get bigger every week. He’s barely had a single day off from the madness and none are coming up in the foreseeable future. “We never expected to be received in such a way,” he says via a crackly cell phone that keeps going in and out as his bus makes its way across the English countryside. “And we’re going work as hard as we can.”

That work will take Rateliff and the Night Sweats to festivals all across North America over the next few months, including a July 24th stop at the inaugural Panorama Festival in New York City where he’ll play just a few hours before Run The Jewels, Sia and LCD Soundsystem. We spoke to Rateliff about his breakthrough year, dealing with the “retro” label and what he hopes to accomplish in the future.

Has this been the craziest year of your life?
Well, I’ve had crazier years, but they weren’t necessarily good ones. This has been a lot of work, but it’s all been great. We just keep finding ourselves in amazing situations and gorgeous places. I’m just continually surprised that people are digging what we’re doing and keep coming to the gigs.

You’re a bit older than most musicians when they break like this. Do you think you could have handled all this adulation at 20?
I think I would’ve ran myself ragged when I was younger. I still have a tendency to do that. Now I feel like I can be more mature in everything. I appreciate it differently because I’ve had to work a little bit for it.

Your music is often labeled “retro.” Does that bother you?
[Laughs] We’re just doing different types of music and people keep trying to put a label on it. That’s just what happens and you can’t get too upset about it, so I don’t mind people calling it retro. I mean, I’ve seen it called a bunch of different things. Sometimes I’m like, “Oh, that’s much different than how I see it, but that’s OK.” And there’s definitely retro elements in there.

The first time I heard your voice, I just thought of Sam Cooke.
I love Sam Cooke, so that’s a huge compliment.

How important was The Tonight Show in terms of breaking you though to a mainstream audience?
That had a huge impact on everything that’s happened to us over the past year. A lot of us didn’t think that Jimmy was going to get that excited, or even push the record like he did. It changed a lot for us and got people really excited.

The song you played that night was “S.O.B.” That’s a really intense, personal song about your struggles with alcohol. Were you at all hesitant to share all that with the world?
That’s kind of your job as an artist. A lot of is personal. Being able to be vulnerable is a thing that makes art important. There’s many more personal songs that have been written over the years. 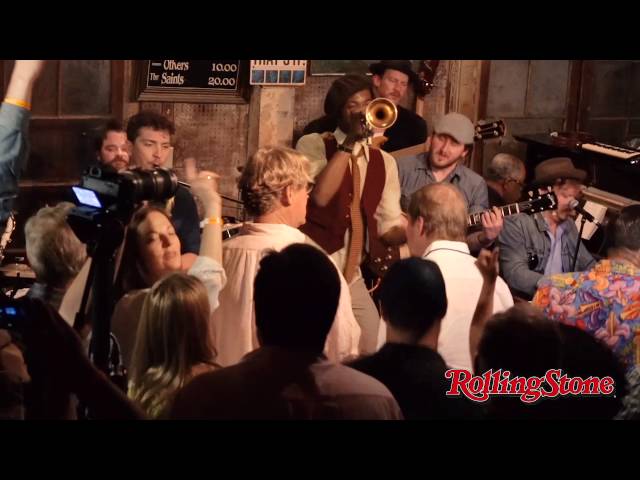 I imagine it’s been helpful to people that have been through similar situations.
Yeah, a couple of people have come up to me and talked about their struggles, so it’s a good feeling. I’m glad it helps.

With all these festival dates you’re doing, you must be playing to a lot of people that don’t know your music very well.
Yeah. Hopefully they’ll come and see us at a club show, which is where I feel is really the best interpretation of what we do.

Do you have more fun playing clubs?
Yes, it’s the best place to see a band play. There’s a different level of comfort and it sounds good. Instruments never sound as good outside. It’s surprising there’s so many festivals now. I think people go to them since there’s a sense of community. It’s an experience.

Are you looking forward to Panorama?
Yeah, It’s the first time in the city they’re doing that. I’m interested to see how it works.

Then you’re playing Farm Aid in September, which will be a cool chance to see Neil Young and Willie Nelson.
Yeah, I hope to run into those guys. I’m about to meet Willie Nelson’s son Lukas, who is a really good guy. I think we’re doing some sort of a song. Farm Aid has always been really important to me. I grew up in the Midwest. I just feel like it’s important to remember that farms need to be in the hands of families and not corporations. Anything we can do to help people remember where their food comes from, we’ll do.

Are you working on material for your next album now?
Yeah. We’ve been trying to do that. We’ve been on the road for over a year now, even though the anniversary of the album hasn’t happened yet. So the strategy has been to keep it fresh for people who have seen the show a bunch of times, and keep up the excitement among each other with any new thoughts.

Most artists say they have a hard time writing on the road.
I try my best. I’ve written a handful of songs, but I really just need some time at home or alone.

Do you think the next album will be sonically similar to the last one?
I want it to be along the same lines as the first one. I definitely want to work with Richard Swift again, who’s our buddy and produced the first one. Some things may be slightly different, but the vibe won’t change.

Do you ever feel overwhelmed when you look at the tour schedule and see 50 upcoming shows in the next few months?
I try not to look at it, honestly. It’s overwhelming. Everybody misses their families, wives, kids, girlfriend. We travel as a family group. We are a family and that’s what makes it special. We care about each other.

Finally, what’s the best concert you’ve ever seen?
There’s so many different ones, but I saw Tame Impala the other day and they were pretty badass.