“I don’t really have a group where I fit in,” says 23-year-old rapper Blessed Samuel Joe Andah, better known as Miracle. “I’m African, but I don’t speak any African languages. I’m Australian but I’m black. I kind of fit in a different world and that’s what I try to do with music. I don’t want to stay in any particular genre, because I grew up with punk rock playing guitar. I didn’t start even rapping until recently. I try to keep it different, keep it fresh.”

Miracle’s methods seem to be working. The Ghana-born, Sydney-raised rapper has been busy since being discovered right out of high school: he’s toured with big names like Childish Gambino and Tyga, is currently on his first headlining tour celebrating his hit single Endless Summer, and his debut album Mainland is set for release on July 18th. If that wasn’t enough, it was just announced that Miracle will be supporting 360 on his tour starting this September.

Miracle, whose moniker was given to him by his mother after he miraculously survived an illness as an infant, spoke to Rolling Stone about Jimi Hendrix, Peter Pan’s Neverland and the joys of being on tour for the fist time.

RS: How has your tour been going?

Miracle: It’s been going really good. It’s my first actual proper tour where I go around to so many different places. I’m just trying to get used to it. It’s pretty tiring, actually, but fun. I’m meeting a lot of new people.

Are you excited about your shows with 360?

Super excited to go on tour with him and share a stage with people like Hopsin, Pez, and Lunar C. I actually met 360 last year at a studio and he’s a super chill, super cool dude. I was featured on his album as well so I’m just really blessed. It’s definitely an opportunity for me to step up as a performer.

You actually got your start with a song you performed in High School, Better Dayz, which was a remix of Pete Murray’s song Better Days. What was it like having that blow up so fast?

Yeah, it was for my last year of high school and it was for a music competition. I didn’t even do it right at all. I was meant to make my own composition but instead I made a remix and I took it to school and my friends loved it. They were like — “let’s go shoot a video” — so we made a video and put it up on Youtube. Then out of nowhere I was discovered. 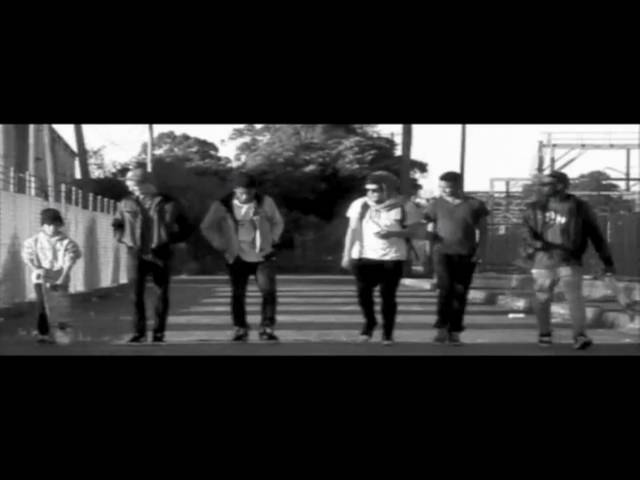 Is it true that Mainland is loosely based on the idea of Peter Pan’s Neverland? Why were you drawn to that?

Yeah, obviously a lot of people know the Peter Pan/Neverland story. It’s kind of about not belonging, knowing that you’ll never fit in to a certain group or you don’t fit into society or whatever is going on there. You feel like there must be some place out there where you do belong. The whole Peter Pan/Neverland/Lost Boys thing is that the Lost Boys were taken to Neverland to live with Peter Pan and never grow up and to just have fun for the rest of their lives. My album is like, what if the Lost Boys were put back into the real world and forced to grow up and forced to live by the rules of society, yet they still felt like they belonged somewhere else? That’s the vibe that I got, so I made an album about it.

You named one of your songs after Django Unchained – are you a Tarantino fan?

We had just gotten into the studio and we needed more of an upbeat hip hop track, so we made a beat on the spot and I just started free styling some stuff. I actually watched the movie Django Unchained the night before, so I had that in my head and I was like, what if I just started rapping about nothing? Because most of the actual “rap” rap songs are just bragging and trying to prove that you’re the best rapper. But then I started rapping about chains and I don’t even wear chains or jewellery or anything, so I tried to make that more of a metaphorical thing. Not necessarily a slave. More like a free slave because Django becomes free and I’m a free slave in hip hop. I’m not a slave to the hip hop ways or to anyone’s predictions or expectations.

What originally made you want to transition from punk to rapping?

I started free-styling at parties. White kids would just be like, “Let’s have a free-style session”, then everyone would look at me because I’m black and expect me to free-style. The funny thing is I could actually free-style and stream rhymes together. It got to the point where every time I went to a party, people would expect me to rap. Since then I thought I might as well make a song. So I made a song called “Blacktown”, which is the area I went to school in. It actually became really popular and kids used to have it on their phone and Bluetooth it to each other. One day I was at the station and this kid was showing me this song. He was like, “Oh, this new rapper from the area blah blah blah”, and the song he played was my song. I told him it was mine and he didn’t even believe it. Ever since then I thought I might have a shot.

You collaborate on the album with artists such as Allday, Youngblood Hawke, Kim Cesarion and Nat Dunn. Who was your favourite person to collaborate with?

My favourite person — that’s hard. The coolest dude on the album is Kim Cesarion from Sweden. He came to Australia a couple times and he’s like a super cool dude. He’s like a lady killer as well. We’d be in a restaurant and there’d be some girls at the table next door and he’d just walk over and pick them all up. But my favourite feature might be Allday because I love his verse on the album. It’d probably be a tie between Allday and Kim Cesarion.

When exactly did it become clear that you wanted to be a performer? Was it before or after you moved from Ghana?

I don’t really remember that far back. I think I’ve always just wanted to be a part of music. Nobody in my family plays any instruments or sings or anything like that so I don’t know where it came from. I just love music. I love the ability to create sounds that people want to hear. I grew up listening to Jimi Hendrix and hearing him play solos and stuff like that, and then finding out that he played it upside down — all those kinds of things that made me even more interested. As soon as I started learning how to play guitar, he was the first person I tried to mimic. I just wanted to be a part of that world.

If you could pick one person to collaborate with on a song, who would it be?

I’d say Kid Cudi. He does such unusual, different melodies. He stays away from the norm and I think he’d make a crazy song. If I had the chance to collaborate with him, I think it’d be intense.

What’s the weirdest thing that’s happened to you on stage?

At this one show in Cairns that I did last month this girl would not stop grabbing my foot. So she grabbed my foot and she got the laces tangled in her fingers and I nearly fell off stage. She eventually got untied and I walked back, looking at my laces, then I walked forward again and she started tying my shoe laces for me while I was still rapping. That’s probably the weirdest thing.