One year after The Sound of My Voice, Linda Ronstadt will star in another documentary: Linda and the Mockingbirds. Directed by James Keach, the film chronicles her 2019 visit to Mexico with Jackson Browne and the students of Los Cenzontles Cultural Arts Academy.

In the new trailer, Ronstadt, Browne, and Los Cenzontles embark on the bus ride from the Bay Area to Mexico. Due to Ronstadt’s health (she was diagnosed with Parkinson’s Disease in 2012), she had to be able to lay down during the ride. “That’s another reason for the bus,” she tells Rolling Stone over the phone from her home in San Francisco. “My back can’t take sitting. I had to be as horizontal as possible.”

The group visited the small town of Banámichi, in the state of Sonora, where Ronstadt’s grandfather grew up. “It’s a beautiful, idyllic little town right in the middle of cow country,” she says. “It was a culture that didn’t have electricity until very recently. It’s right next to the river that has the most fertile soil in all of Mexico. The fruit that comes out of there is fantastic. The food traditions are food traditions that I grew up with. It’s really delicious.”

Browne, who has also worked with Los Cenzontles, happily came along for the ride. “The kids love him,” Ronstadt says. “He’s a natural teacher and muse.”

In the trailer, Browne adds, “Look, if Linda Ronstadt invites you to go to Mexico, I don’t need any more than that. Let’s go!”

The singer grew up in Tucson, Arizona, about 40 miles from the Mexican border. With fair skin and a German surname, her Mexican heritage wasn’t always apparent. “I remember trying to tell Jane Pauley I was Mexican,” she says with a laugh. “She said, ‘You’re not Mexican. How far back in your family do you need to go to get a Mexican name?’ I went, ‘If you go back one generation, you get a Spanish name. But Spain isn’t Mexico either.’ Mexico is a melting pot. It’s Spanish and German and French and indigenous American/Mexican. I’m all of those things.”

As a child, Ronstadt and her family would visit Mexico frequently, often to eat lunch or shop. Her grandfather taught her many standards, which she later recorded on 1987’s Canciones de Mi Padre and 1991’s Mas Canciones. The heartbreaking “La Orilla De Un Palmar” appears in both documentaries: a young girl performs it for her in Mockingbirds, while Ronstadt and her family sing it in The Sound of My Voice.

“We sang with my grandfather to start with, and then we sang with my dad,” she says. “Then my brothers had various integrations with several of my cousins. They had a group and they sang it. You put together any combinations of Ronstadts and they can sing that song. [Laughs.]” 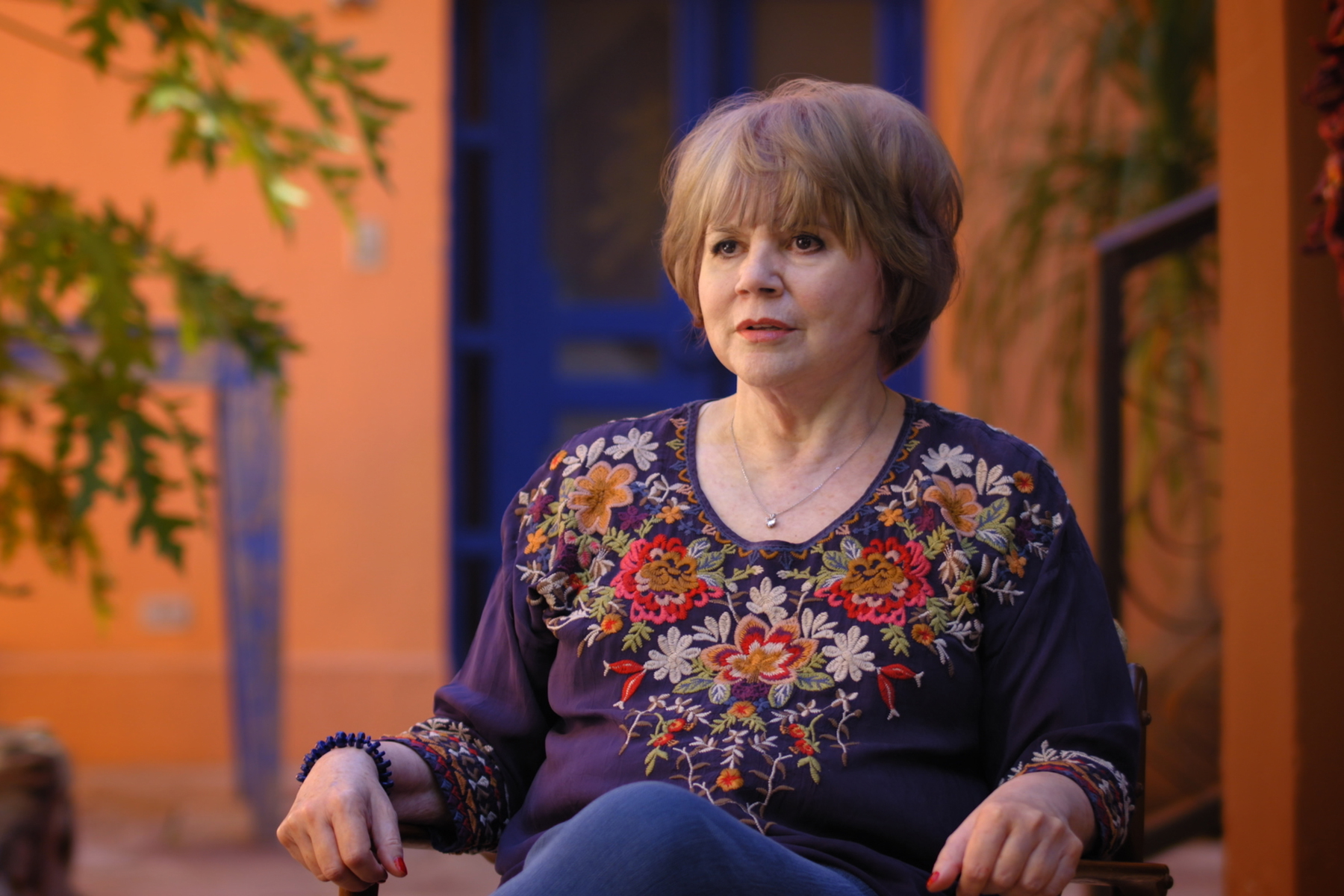 While in quarantine, Ronstadt has spent a bulk of her time reading and painting watercolors. “My life has changed very little,” she says. “I know a lot of other people’s lives have changed profoundly. I go out sometimes, but not to restaurants or concerts or anything like that. I’m very careful about who I have in. It’s hard to live in a vacuum.”

She’s also been watching TV and film, most recently the terrifying new Netflix documentary The Social Dilemma, which examines social media and its effect on society. “It made me feel like things are hopeless, like we’re heading into an authoritarian government internationally,” she says. “I don’t know if we can stop it, but we have to go down fighting. The QAnon people and the Minutemen at the border will be fighting it tooth and nail. Even if we get a good president, they won’t allow him to govern, just like they did with Obama.”

Linda and the Mockingbirds arrives at a time when President Trump is continuing his efforts to build a wall between America and Mexico as he ramps up his anti-immigrant rhetoric in the final weeks of a bitter re-election campaign.

“It will make people aware of what they’re discriminating against so vigorously,” she says of the film. “Anti-Mexican discrimination has been one of the main planks in the platform of Donald Trump. It’s one of the things that got people energized. It was like, ‘We aren’t going to let these people in here. They’ll get something for nothing and they’re going to take away our jobs.’ It’s a total myth that they impact the economy in a negative way. They’re actually adding to the economy tremendously.”

Like so many Americans, Ronstadt was also rattled by the death of Supreme Court justice Ruth Bader Ginsburg, who died last week at the age of 87. “How much bad luck can we have?” she asks. “The woman had nothing but one stroke of bad luck after another. Trump has nothing but luck. He’s such a revoting human being and he gets a lucky break every time he turns around. He doesn’t even appreciate it. When he talks about Ruth Bader Ginsburg or John Lewis, immaculately fine people, he never even understands their quality. He’s so cynical.”

She’s obviously anxious about the upcoming election, but is optimistic about Vice President Joe Biden. “I’ve never had such fear, such mourning,” she says. “[But] I’ve liked Joe Biden for years. I just love him. I hope that he wins. And I have great respect for Kamala Harris. I think we’re in such deep trouble though. I think there’s going to be a civil war. I’ve thought that since the Bush administration. It’s the most dangerous thing to ever happen to the country, I think.”

“[The Republicans] want to get rid of abortion and gun control and gay marriage,” she adds. “They want everybody to pound the same damn bible. I am also offended when I see people having to swear on a bible in court. Why not swear on a law book? I don’t believe in God, but I believe in the law. The law would keep me telling the truth, not some imaginary Santa Claus God living in the sky.”

Many of Ronstadt’s peers — from Neil Young to Joni Mitchell — have been digging deep into their vaults for archival material. Last year saw the release of her first live album, Live in Hollywood, recorded in 1980. She has more live releases on the horizon, including shows from Canciones de Mi Padre, Mas Canciones, and her standard LPs with Nelson Riddle (1983’s What’s New, 1984’s Lush Life, and 1986’s For Sentimental Reasons).

“I don’t do any social media, but I was convinced this year to put up a website because we have found a lot of board mixes of old live performances,” she says. “They aren’t that well-recorded. They are board mixes from the sound mixer at the concerts, but they are on DAT — so they are digitally recorded. We’re going to put a selection of those out.”

Linda and the Mockingbirds will be released digitally and on demand on October 20th. It’s currently available for preorder on iTunes.