It’s been a long and winding road since prodigious 1999 debut The Captain swept Kasey Chambers onto the world stage – the album’s title track going on to feature in HBO phenomenon The Sopranos. “When they ended up winning an Emmy, and the producer got up and accepted the award, he thanked me in his speech,” Chambers recalls. “It was so weird – you know, thanking people like Elvis Costello and the Rolling Stones for the music they used… and Kasey Chambers. I was like, what the fuck!” Since then, the local country-roots-Americana scene’s foremost keeper of the flame has released a slew of crossover hit singles and turned out 10 studio records, a picture book, and an autobiography. With latest, double-LP outing Dragonfly – Disc One is Chambers’ first full-length project with producer Paul Kelly, while Disc Two was helmed by brother and longtime producer Nash Chambers – the multi-faceted artist takes flight as never before. Chambers has just announced a sweeping national co-headlining tour with established collaborator and mate Bernard Fanning, starting late this month.

You had a fairly unique childhood. What are some of your fondest memories of that time?
We lived in our car. We travelled around the whole of the Nullarbor Plain – my dad just kind of hunted his way around the Nullarbor, travelling to a different place every night, living off the land, hunting all our own food. We didn’t have any radio or TV or anything like that, so we’d just sit around the campfire and my dad would get out the guitar and we’d all sing and play together. I fell asleep every night in a moving car, with noise around me all the time. So, being on tour now feels like quite a comfortable sort of lifestyle for me. Even just to bring my kids on tour, which I do a lot of the time – it’s a fairly natural kind of thing for me to do.

What kind of tunes did you and the family all sing around the campfire?
The first song that comes to my mind is Gram Parsons’ “Still Feeling Blue”, which I went on to record on my Barricades & Brickwalls [2001] album. My dad’s still in my band, and we still sing it together every night on stage. Then there was a lot of Emmylou Harris, Johnny Cash and Merle Haggard, then back to the Carter Family. And a little bit of Slim Dusty and Buddy Williams and those Australian bush balladeers, as well.

You made half of Dragonfly with your brother, Nash, while your dad, Bill, has been in your band since day one, and your mum, Di, still manages the merch side of things. Is it a well-oiled machine, or do you still have your moments?
It’s a bit of both. We’ve kind of worked out our dynamic and we’ve grown into that together – we started playing music when we were really young and I was a kid, so I had to be with my parents or they wouldn’t let me into pubs to sing! But, saying that, we still absolutely have fights. When Nash and I were making [Disc 2 of] this album, we ended up that session with this massive fuckin’ barny! 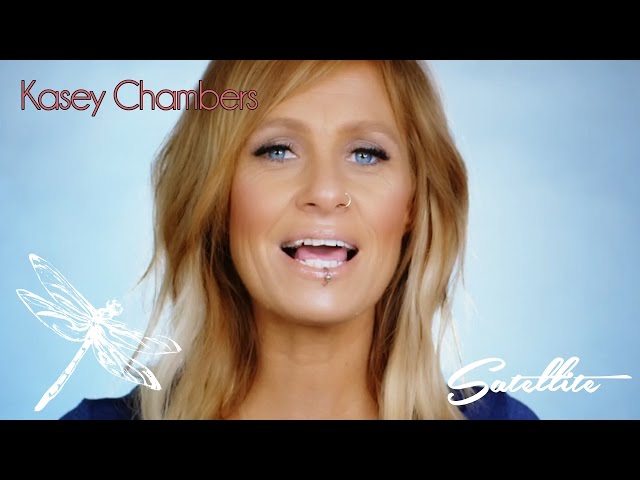 You’ve said that you have a newfound strength and power in your voice since undergoing nodule surgery last year.
I’ve had nodules for, like, 20 years, and I’ve just learned to sing through them. But I got to the point where I really couldn’t even get through a night anymore – I couldn’t even get through one gig without having to drop a couple of songs or something like that. And after the surgery, once I started re-discovering my voice, I honestly felt like a new person. I think it still sounds like me, but there are just all these other elements in there, there’s such a depth that I just don’t think I’ve ever had before on a recording.

The symbols and imagery of Christianity crop up in your music a lot. What kind of role do faith and religion play in your songwriting?
I grew up listening to a lot of Gospel music, because I grew up in a really religious family. I guess I’m kind of used to hearing that language. I love the way it sounds in the sort of music that I play. I’m not a preacher by any means – I have a lot of faith, but I wouldn’t call myself religious at all.

You’ve done it all at this point – a children’s album, your collaborations with Shane Nicholson, an LP of interpretations of the songs that shaped you (Storybook), now a double album.
I turned 40 this year. Now, some people are thinking 40’s pretty old – and some days I wake up and I feel pretty fuckin’ old! But then I look back and I look at all the things I’ve done in my career and in my life – even just personally in my life, with my family. And sometimes I’m like, well, no wonder I’m fuckin’ tired! It’s been so many crazy and amazing things. And, you know, I have a normal life as well – I’ve had some hard time shit go on in my life and all of that, which you’ve gotta get through like a normal person. But that’s all food for the soul. Helps make the next record!

You’ve been collaborating with Bernard Fanning a lot in recent years, and this month you start a national tour together. What can we expect?
Bernard and I have worked together a lot over the years, and we’re mates, as well. I think it was inevitable that we were always gonna end up touring together. We actually have a musical history together. Even though we’ll be playing our own separate sets, we’ll be playing together a lot as well.