Sitting on a couch at Wilco headquarters in northwest Chicago, Jeff Tweedy is enjoying what he calls “kind of a snow day” – even though it’s the middle of summer. Torrential rain has forced the cancellation of his hometown show, so he and the band that’s been backing him on a run of solo dates have retreated to the rambling loft, a combination rehearsal space, recording studio and clubhouse. “You always want to play, especially at home,” says Tweedy, dressed in a navy-blue button-down and black cargo pants, his scraggly beard framed by a baseball cap. “The problem is there’s so much to worry about with making sure all your friends and family get into the show, so there’s a part of me that’s OK with getting the day off. It’s nice to get a break and relax.”

Or try to, anyway. Surrounded by vintage amps, keyboards and guitars, Tweedy is frustrated with another, less musical piece of equipment. He leans over to his 18-year-old son, who’s sitting on an end table beside him. “Spencer,” Tweedy asks as he fiddles with the Apple TV remote control, “how do you work this thing?” “Gimme that,” says the tall, reedy Spencer, dressed in jeans and a bright-red button-down. He switches the TV from a World Cup soccer game to a viral YouTube video of longhaired metal fans headbanging in the wilderness.

Lately, Spencer has been lending his dad a hand with more than just consumer electronics. The younger Tweedy played drums on Sukierae, the album he and his father are releasing under the name Tweedy. By turns spunky (“I’ll Sing It”) and gossamer (“Wait for Love”), the album’s 20 songs were recorded right here in the loft, like so much Wilco material before it. (Tweedy hasn’t turned his back on his main gig – Wilco are releasing a rarities compilation later this year, and tentatively plan to have a new studio album out in 2015.)

Spencer, who graduated high school this past spring, has been playing drums with his own band, the Blisters, since he was seven, and he drummed on gospel great Mavis Staples’ 2013 album, One True Vine (which Jeff produced). He directs me to a small corner of the loft, where a red rug covers the floor and two microphones stand side by side. “Right here is where me and Dad tracked a lot of the album,” he says. “We were this close to each other.”

Back at the TV, Spencer checks in again on the World Cup game, a third-place match between the Netherlands and Brazil, whose performance inspires some snarky comments from Tweedy’s band. “Brazil should be relegated, they’re playing so badly,” says bassist Darin Gray, dipping into some hummus. Guitarist Jim Elkington nods. “That’s how football works back home,” he says in his British accent. “If you lose too much, you get sent down to a lower league.”

This idea sparks something in the Tweedys. “They should have relegation for rock bands,” Jeff says. “If you put out too many shitty albums in a row, you go down to the minors and can’t record anymore. They should definitely do that. There’s too many bad albums out there.”

Spencer, a blogger since he was 13, can’t let that slide. “Dad!” he says. “How can you say that? You buy more records than anyone I know!”

Tweedy smiles and takes a bite of licorice. “Shut up, Spencer,” he says jokingly. “Don’t contradict your father in front of a journalist.”

THE FAMILY TWEEDY: Spencer rocking out with his dad as a toddler.

Spencer, who peppers his blog with quotes from literary figures like Jorge Luis Borges as well as his own artful photography, was thrilled to get involved in the family business. “I absolutely enjoy it when we hang out together,” he says. “My dad’s fun to play music with.” As far as summer jobs go, Spencer’s sounds like a pretty good one. If it is indeed a job – and not volunteer work.

“Did you get paid?” asks Jeff, jokingly. He calls to the burly studio manager, Mark Greenberg, who’s sitting at a computer nearby. “Did he get paid, Mark?”

Mark shrugs and Spencer frowns. “Not yet,” Spencer says. “Don’t worry about it, Dad.” Dad cackles.

The next morning, Jeff and Spencer are back at the Wilco loft for meetings. Spencer’s brother Sam, 14, has come along too, to do some light welding work on the homemade computer he’s building. In a few days, Sam, who recently wrapped his junior high school career, and his dad will leave for Seattle to attend a gaming tournament. “It’s for Defense of the Ancients 2 – is a spectator sport now,” explains Jeff with an air of disbelief.

“The trip is Sammy’s graduation present, right?” asks Spencer, seated at a red table in the studio kitchen. Jeff, seated across from him, replies, “It’s hard to tell what his presents are and what are just the perks of being a cool kid in a fairly well-off family.” Mostly, though, Jeff says, the Seattle vacation is about trying to dole out equal amounts of quality time with his kids. “Spencer and I get to spend so much time together doing music that Sammy and I try to figure out other strategies for having that kind of connection.”

Recently, for difficult reasons, strengthening those connections has become increasingly important. Sue Miller, Jeff’s wife and the boys’ mom, is in the midst of a battle with lymphoma. Diagnosed not long after work on Sukierae had begun this winter, Miller is currently undergoing chemotherapy. “The prognosis is good,” says Tweedy. “We’re proceeding with the idea that she’s going to be in remission.” The defiantly upbeat Sukierae (the title is Miller’s nickname) was born out of her husband’s attempts to process the illness in a positive way. “I didn’t want the album to sound like a premature eulogy, and working with my son was a great experience,” says Tweedy quietly. “Hopefully the music reflects that cuteness and playfulness.” 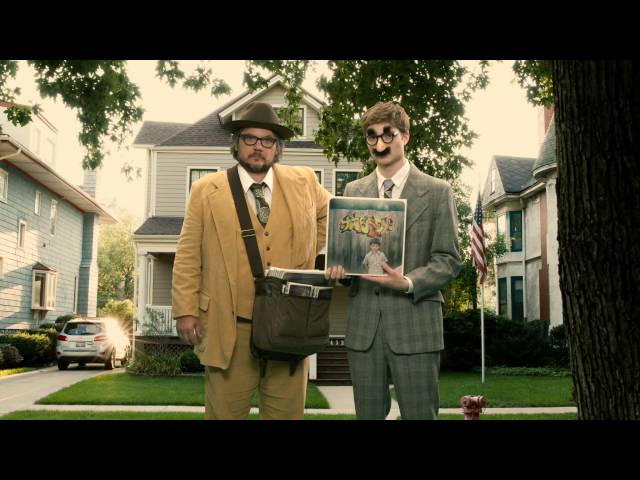 For his part, Spencer, who has deferred his entrance to Wisconsin’s Lawrence University for a year, says, “Mom is kind of the center of everything. I have no problem enshrining my mother in an album. It makes sense. She’s number one in the whole operation.”

Jeff smiles warmly and runs his hand through his unruly thatch of gray-flecked brown hair. “Rock & roll has always had this idea that there’s some kind of generational warfare,” he says, looking at his son. “I think it’s healthier now, where both sides don’t seem to be as entrenched.”

So maybe that means there’s a little more leeway for the younger folks? Not quite. “The other day,” says the son to the father, “Mom said, ‘Spencer, I want you to know that after the shows you have my permission to drink a beer.'”