Twin Atlantic vocalist Sam McTrusty is in Belgium, where he has been awake for precisely five minutes. In the middle of a whirlwind promo trip to talk up the band’s just-released second album, Great Divide, this is clearly not the time to be indulging in luxuries like a good night’s sleep. “It feels like we’re doing an actual press junket,” he chuckles. “It’s really flattering cos so many people want to talk to us about the new album. So it’s only positive.” Forming in Glasgow in 2007, Twin Atlantic have taken the slow road to success, building their profile one gig at a time. Their 2011 debut full-length, Free, was an impassioned slice of agit-rock, all jagged edges and arena-sized choruses. Its follow-up is a more focused yet no less anthemic effort, and it’s first single “Heart and Soul” was recently declared the “Hottest Record in the World” by UK DJ Zane Lowe. A UK arena tour with Kings Of Leon and show-stealing performances at festivals such as Glastonbury have laid the foundation nicely for what should be a big 12 months.

You toured Free for three and half years. How did you grow as a band during that time?
I think we grew in every direction possible, we became a monster. I think the main thing that happened to us was, because we did so much travelling and experienced so many highs and lows, they were the things that changed us as people. And at the start of the album we were playing to 30 people in some of the cities in the UK and by the end we were playing to 3000, so it was a real life changing thing.

Were there any shows on that run where you thought, what are we doing here?
There was one we played in St Louis in America, and the room held 1000 people. It was in this entertainment part of a casino, that was attached to a hotel, and literally there were five people there. Five people in a room that held 1000! And as we rolled up to the gig, there was a huge billboard with a video wall advertising the show and still only five people came! We’ve had our fair share of failures.

The album starts with a bold statement: “the youth of today have lost their voice”. What do you mean by that?
It’s obviously a really social media heavy society that everyone lives in, and I think my interpretation of it is that it’s great in that it’s brought so many people who live really far apart really close together, but the people that you’re closest to you actually communicate less with because of it. And I think it’s pretty homogenising – [it’s hard for] teenagers and young people to truly have their own opinions cos they’re bombarded with everyone else’s every day, all day. It’s quite a heavy thing to open a record with cos it’s a bit finger-pointing, I suppose – “You guys don’t know what you’re doing” – but it was more just using that as a metaphor for what it feels like to be a young person today. Slightly lost.

It also sounds like a statement of intent – as though perhaps you have the answers, and they’re in the album
I’m glad you said it cos I didn’t want to say that, but that was the intention. Even sonically the music’s supposed to sound like the curtain being drawn back, it’s supposed to add a bit of drama to the whole record. And we wanted to make a big statement, so I’m glad you said that cos if I’d said that I would have sounded arrogant! 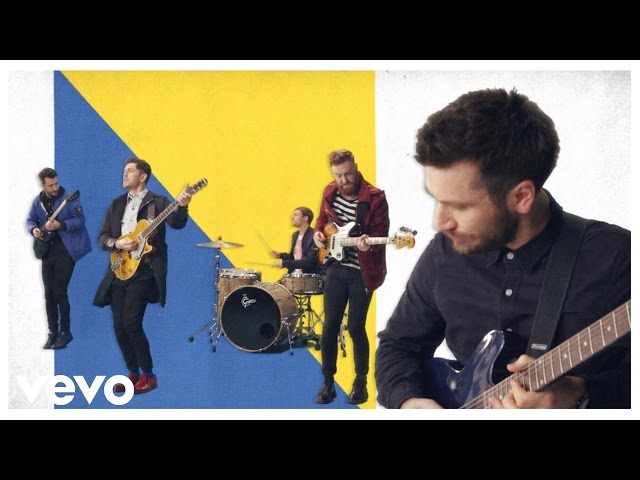 You recorded Great Divide with Gil Norton in Wales, before realising the album needed something extra, so you went to LA to work with Jacknife Lee. What was wrong with the sessions with Gil?
We struggled to review ourselves as we were going along. Literally, we got home to Glasgow after recording in Wales, and after two days we all phoned each other and went, “Yeah, it’s not good enough is it.” But we were in Wales for three months, and we were adamant that we were making this amazing record, and just closed everything out. We were in the middle of nearly nowhere for three months, living together and the studio door was 10 metres away from my bedroom door. That [realisation] was the moment that added tears into the blood and sweat!

Did you panic?
I don’t think so. It was a really calculated, calm decision to say this is great, but it’s not amazing. And that’s how we felt. We felt like it was really good, but not good enough to take us to the next level. It wasn’t good enough for our fans that have shown us all the support – to give them that record wouldn’t have been good enough. And the panic sort of came about a month later when we went in to record with Jacknife, and that came about because he works completely differently than we were used to working with Gil. And it was this uncomfortable feeling, and that’s when the panic set in.

Why Jacknife?
He’s a confuser. I think that’s why we were so drawn to him. He’s worked with quite prolific rock bands that are really guitar based and he brought out this other side to all those bands. With Weezer they went on this prog structured songwriting experiment with him, and with U2 he took away all The Edge’s delays and affects. That’s the guy that we needed to crack the mould that we’d forced ourselves into. It was fucking so tricky and difficult. There were points where people were questioning it like, “Fuck this, being in a band’s not worth it!”

And Gil was understanding of your decision?
Yeah, he’s such a pro. He’s been through every experience there is to be through in the music industry, so he totally understood.