Mavis Staples was just eight years old when, one evening in 1948, her father, Roebuck “Pops” Staples, sat her and her siblings down on the floor of their South Side Chicago apartment, and taught them their first-ever song: the country-gospel traditional “Will the Circle Be Unbroken.”

As soon as he began to play the song, Staples was immediately reminded of her first experience as a singer.

“Lord, Tweedy, that song sounds so much like my family,” Staples told the Wilco singer. “It sounds like the Staple Singers, it does.”

Tweedy was overjoyed; that’s exactly what he had intended.

“Mavis,” he responded, “I’m even playing a couple of Pops’ guitar licks in there.”

“You ain’t telling me nothing!” joked Staples. “I can hear my father.”

“Peaceful Dream” forms the backbone of Staples’ latest album, If All I Was Was Black, her third collaboration with Tweedy since 2010. It is the latest release in an incredibly prolific period of work from Staples, during which she has toured nearly constantly, appeared at several high-profile tribute concerts in her honor, and found time to team up with M. Ward for her rootsy 2016 record Livin’ on a High Note.

But unlike her first two cheery, largely apolitical records with Tweedy, including their Grammy-winning 2010 collaborative debut You Are Not Alone, Staples’ new album – out November 17th – is a pointed piece of social commentary that directly recalls the social-justice anthems Mavis once sang with the Staple Singers alongside Dr. Martin Luther King in the Sixties.

“So many young boys are being stopped by the police and being killed. We’ve got a man in the White House that is urging this stuff on, and he’s brought on a rebirth of bigotry and hate,” says Staples. “This world … I just don’t know. I just stop myself and wonder, ‘What is going on?’ I’ve been doing some extra praying. We need it. We need it bad.”

“Mavis was really surprisingly OK with sounding angry,” Tweedy says of their new album. “It’s the first time since we started working together where there’s been a righteous anger that she’s been comfortable with.”

Singing the types of songs the Staple Singers had popularised in the Sixties has gotten Staples in a particularly reflective mood as of late. “I still talk to Pops,” she says of her father, who passed away in 2000. “I’ll say, ‘I know you hear this song.'”

Staples continues her lifelong project of singing protest songs of both uplift and struggle on new originals like “Try Harder,” “Build a Bridge,” and “No Time for Crying,” the latter a moving call to action: “People are dying, bullets are flying,” Staples sings with quivering urgency, “We’ve got work to do, so much work to do.”

“The more I get to sing a song like ‘No Time For Crying,’ the harder I’m going to sing it,” says Staples, 78. “That’s the only way I know to get to the people, is through a song. I’ve lived the life I’ve sang about and I just want to make it better. Music is powerful. Music is power. It can bring us all together as a people, and that’s what I hope to do.” 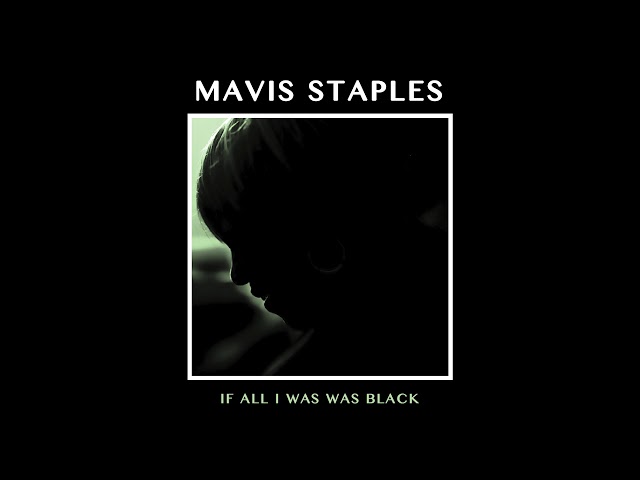 The songs on If All I Was Was Black began to take shape as Staples and Tweedy observed continued police violence against African-Americans during the past few years. Watching coverage of the white-supremacist violence in Charlottesville this past August, Staples was reminded of the racial hatred her family had fought so hard to overcome in the Sixties.

“When I saw those men marching with those torches, the next day I was looking for them to burn a cross,” she says. “They didn’t have the white sheets on, but that was who they were.”

“Mavis and I talked about how sadly, the time isn’t right to put out another happy, feel-good record,” Tweedy explains. “It’s time to remind people that the songs that she sings from the time with her father and the Staple Singers, back when they were embedded in the civil-rights movement, those songs aren’t nostalgic. I think people can sometimes take them that way when she does her shows. I thought it would be great if we could make a record that was all about now and that really hammered home the point that this is not a struggle that’s over. In a lot of ways it’s not a struggle that we’ve even begun the types of conversations that we need to have.”

“I’ve never taken ‘Freedom Highway’ out of my set, because I knew we weren’t finished, my work wasn’t finished,” says Staples. “But I never thought I’d have to go this far.”

The songs on If All I Was Was Black were written after a longstanding series of extended conversations between Staples and Tweedy about the direction the country had taken in recent years. Although Tweedy wrote the majority of the songs on the record, he is quick to credit the thematic and lyrical contributions of Staples, who helped write several songs, and more generally, provided the foundational ideas and spiritual ethos of If All I Was Was Black.

“There isn’t anything I can point to that would reflect a traditional songwriting scenario where people are sitting down and one person says a line and then another says a line,” Tweedy says. “I wanted the songwriting credits to reflect that I was writing through and with Mavis’ voice. Having conversations with Mavis about civil rights and the current state of affairs really gave me a clearer voice to write with to address those things. In the past, we’ve mostly just had a great time being in each other’s presence while still acknowledging the legacy and heritage of her and her family, so it was interesting to actually highlight our color in our discussions this time.”

“Having conversations with Mavis about civil rights and the current state of affairs really gave me a clearer voice to write with to address those things,” Tweedy says. Credit: Tim Mosenfelder/Getty Images

For Tweedy, writing for Mavis’ voice provided the longtime Wilco frontman with a way to straightforwardly address his feelings about the state of his country in a way that he might not otherwise have been able to access.

“There are a lot of things on this record that would be much more difficult to say in my own material,” he says. “Mavis’ voice has allowed me to approach things that way, just coming out and saying things directly. I think whoever listens to my own music would be a bit mystified by that directness in say, Wilco. But these are definitely things that have really, really, really upset me about our culture, about the country we live in, about my friendships with people of color, with my community, all of these things affect me on a daily basis. I’m honoured to be given a place to have an outlet for that frustration and to be a part of that conversation.”

One song that Staples specifically played a large part in writing was the title track. In its earliest stage, Tweedy was hesitant about even singing the song himself, asking Staples if she thought it was OK for him to show her an early version of the song. “There’s a demo version of me singing ‘If All I Was Was Black,'” Tweedy says with nervous laughter. “I don’t know if that should ever see the light of day.”

“When Jeff came up with ‘If All I Was Was Black,’ that cracked me up,” says Staples.

When her record label was testing out various ideas for the album cover, Mavis Staples insisted on a stark, side-profile photograph of the singer that covered most of her face in dark shadows.

“They were trying out some different ideas and I said no, ‘Just put me on the cover, black as I can be,'” she says. “It’s beautiful.”

Staples was inspired to record her new album, in part, by a recent slew of young singers she’s seen carry on her tradition of socially minded freedom songs. In the past year alone, Rhiannon Giddens named her most recent album Freedom Highway (and covered the Staple Singer original), while artists like Gorillaz and Benjamin Booker have enlisted Staples to sing on 2017 anthems like “Let Me Out” and “Witness.”

When Staples first heard the latter, written by Booker, she thought, “Lord, thank you Jesus, we got some help. Me and Tweedy got some help.”

For now, however, Mavis Staples is more than happy to carry the spirit of her own legacy herself, in song and onstage. “I’m not worried,” she says. “Like Dr. King said, I know we will see the promised land one day, but what we have to get through to get there, we shouldn’t be going through this right now. We’re going backwards. But that song, ‘No Time For Crying,’ that says it all. We’ve got to roll our sleeves up, put our grown-man pants on and grown-lady pants on, and get to work. We’ve got to get to work.”