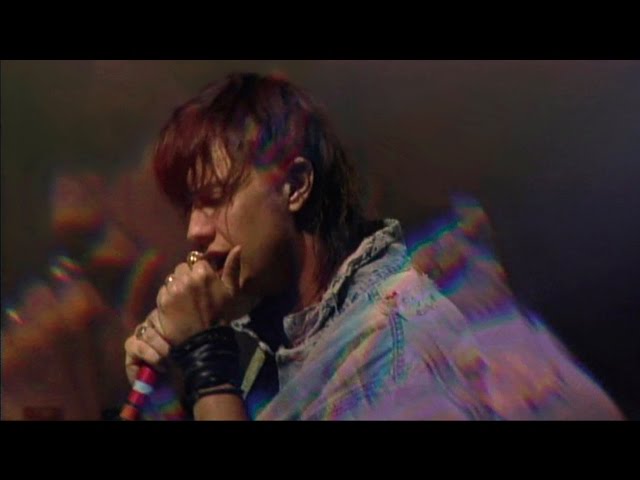 Julian Casablancas sees the valor in going down with the ship. For “Human Sadness” – the apocalyptically themed new video from the Strokes singer’s other group, the Voidz – he took inspiration from the Titanic’s eight-member orchestra, who are said to have played until their deaths.

“It just seemed like a fitting concept,” Casablancas tells Rolling Stone. “The world’s gonna end and you decide to play music. That’s basically what happened on the Titanic and in a weird, dark, ‘sad’ way – forgive me – it’s kind of like life: dark. But you can look at life as ‘managing denial.'”

The gritty-looking video is a 13-minute head-trip, intertwining different vignettes of desperation, survivalism and heroism all connected by the song. The group performs the track live in the video, making for a different take than the one on last year’s Tyranny LP. Each of the Voidz members contributed images that came to them while making the record, which they dramatized in the video between stock images of war and sex. The scenes make for pre-apocalyptic flashbacks that fit into a larger narrative that plays out over the lengthy clip.

“The idea of each band member having his own story is always there for me,” the singer says. “But it’s always hard in a short video. So this was the chance.”

One of the clip’s directors, Warren Fu, tells Rolling Stone that he and Casablancas have been conceptualising the “Human Sadness” clip since the end of 2013, when he began compiling possible band-member storylines into storyboards. When they began production on the video, they worked with three different directing teams, led by co-director Nicholaus Goosenn and photography duo Wiissa, in New York City, upstate New York, Downtown Los Angeles and Oxnard, California. “Some of the conceptual ideas are there for an entertainment factor, but underlying the band narratives are personal problems, and we wanted to loosely present those within an overall broader scope of world issues,” Fu says.

For his flashback scenes – or “memory movies,” to use his phrase – Casablancas appears as a “deli store clerk,” at Goossen’s suggestion, and also cavorts with a woman on a beach (played by Casablancas’ wife, Juliet). There are also scenes of him watching TV, seeing the war footage to dramatize how the world came to an end.

Connecting it all are shots of each member playing in a white room while wearing sunglasses that have been painted over with white, a nod to Laurie Anderson’s Big Science album cover, but also a commentary on technology. “Everyone in this future had their own entertainment going,” Casablancas says. “From there, we just had fun with it.”

Most of the band members figured out what they wanted to do. “Amir [Yaghmai] always wanted to do a solo in a swirling hurricane,” Casablancas says of one of the Voidz’s guitarists. Meanwhile, he says the group’s bassist, Jake Bercovici, “always jokes about being the ‘man down’ if we were in a war – the guy who gets shot and says, ‘You guys just go on without me.'” (Nevertheless, the wounded soldier role went to guitarist Jeramy Gritter.)

“We wanted to have a tough thing of someone who gets messed up by stuff as a kid, originally a kid watching a parent kill his pet based on stuff that happened to Jeramy,” Casablancas says. “Unfortunately, his stepdad did that kind of stuff.” But that role went to drummer Alex Carapetis, whose scenes reflect parents fighting. Gritter ended up with an idea that Casablancas gave him: soloing in a strip club – “looking like ‘enter the void’ and money falling and eventually being crushed and drowned by it in a surreal way,” the singer says.

And then there’s keyboardist Jeff Kite. “Jeff’s story was based on that classic driving, flashback-style montage you often see, like in Rocky IV after Apollo Creed gets killed,” the singer says. “There’s a vague lost childhood/drug problem/lost girl thing in there, but it was way more about the night-drive montage for us.”

All of the vignettes revolve around Casablancas, who (spoiler alert!) ends up watching TV on a beach “after the destruction,” as he says. “The beach I’m sitting on is actually a fake world or a menu screen.”

Related: 22 Things You Learn Hanging Out With Julian Casablancas

As for the clip’s look, the singer cites a myriad of exotic TV shows as inspiration for the grimy-looking clip, ranging from a “Turkish television show in the Seventies” to the look of “Germany in 1982.” “It was just an aesthetic based on songs and videos [from] musicians from Turkey in the Seventies and a still image of some crazy, weird, cool-looking set of a Sixties band on a TV show,” Casablancas says. “That show was probably American, but I liked to imagine it was from Turkey in 1973. A lot of cool Seventies funk came out of Turkey. They mixed a lot of American music and were getting with their own traditional stuff.” He also adds, “You can find a lot of this stuff on a place called the Internet.”

But beyond aesthetics and even Casablancas’ down-with-the-ship mentality, the singer says a more existential theme connects the images in “Human Sadness”: the quote from 13th-century Sufi mystic and poet Rumi (“my favorite poet,” he says) that introduces the clip. The line, “Beyond all ideas of right and wrong, there is a field/I’ll meet you there,” underlies the whole song, the singer says. It’s a line he likes so much that he borrowed a trick from Bob Marley (“probably my favourite music artist,” he says) and paraphrased it for the chorus in “Human Sadness.”

“That line is an artful way of describing the intensity and longing and beauty and hope and desperation and the impossibility of total understanding of death and life and the beyond and the nothing and the everything,” Casablancas says. “It’s a powerful thought that is both bursting with joy and sadness somehow.”