In late-February, Sydney hip-hop duo Horrorshow released their fourth LP, Bardo State, the follow-up to 2013’s King Amongst Many, which landed at #2 in the ARIA charts; going on to be nominated for the J Award, ARIA Award, and a shortlisting in the Australian Music Prize.

Rolling Stone recently sat down with the pair — rapper Solo, aka Nick Bryant-Smith, and producer Adit Gauchan — to discuss dealing with the pressures associated with the new album, bonding over rap music as teenagers and hip-hop vs. “real music”.

How did the album wind up being titled Bardo State?
Solo: We approached this album differently than we did the last one [2013’s King Amongst Many]. With that we identified the theme or concept pretty early on in the process and wove it through the songs, which I found a bit constricting. This time we just made songs, and afterwards I realised a few dealt with death in different ways. I’d been researching the Bardo Thodol (known in the West as the Tibetan Book of the Dead) and what I learned about it was the concept of ‘Bardo’, or being in-between states. So listening back to the songs I realised there were songs about dreaming, and wondering about different ways your life could’ve gone, references to meditation, references to tantra… it was strange to me that without consciously doing it, the album is littered with references that relate to that concept of being in-between. It felt like that’s the path I was heading down the whole time, even though I didn’t know it.

Even though that concept is quite dense and heavy, the album has a light, fun energy to it…
Solo: When we finished the last record, I felt like my contribution was a bit laboursome, like it was a little bit like a thesis.

Adit: We’re really proud of the last album, but it was more essay and less emotion. There was poetry in there, but poetry can have a bit more ambiguity or be a bit looser with things. And same thing with the music. We did want to inject a bit more emotion into the music this time around, and just being aware of what we wanted to do – make some club tracks and also say something with the music. Once we got a few tracks under our belt for this album, we felt really confident – it’s probably the most confident we’ve been on a record together.

Did you handle all the production on your own, Adit?
Adit: In the past I’ve worked with a bunch of people, and that’s continued this time around, and probably more so – it’s our most collaborative album to date. There’s a lot of beats that I’ll start out making on my own, but I’ve always worked with Freddy Crabs from Sticky Fingers, and Jono Graham who’s a guitar virtuoso, and this time we’ve also brought in Nick Martin, whose production I’ve always enjoyed and respected. It’s the first time we’ve worked with another producer, and he co-produced the whole record with us, coming in at the end and adding some touches and tightening things up for a two week period, where I learned a lot. We love collaborating with others, because it just makes us better as well.

Some people would probably be surprised about how many instruments go into the making of an album like Bardo State…
Solo: A lot of people put hip-hop in this box where it’s not musical – like, there’s music, then there’s hip-hop.

Adit: People lose their shit if there’s an instrument on stage or something [laughs]. People who aren’t part of the culture of listen to hip-hop religiously can be ignorant as to what goes into making it.

There’s a lot more singing on Bardo State – was that a conscious decision?
Adit: Nick’s always sung – he was in choirs before he started rapping, so it came about naturally. On this album there are some songs which are just Nick singing, which was just part of mixing things up and experimenting more.

Solo: I’ve become more confident in that ability – it took a while to get there.

Solo: I think that’s come about because of our 2013 Triple J Like A Version [where Horrorshow did a mash-up of Lou Reed’s “Walk on the Wild Side” and A Tribe Called Quest’s “Can I Kick It?”] , which has become a staple of our live show. Then we did an acoustic tour, which was much more stripped back with us sitting down and playing instruments, so I was less focused on running around hyping the crowd up and more me sitting down and being able to hone in on my vocal ability. Both those things made me a better singer and more confident with it. It’s just more tools in the kit. 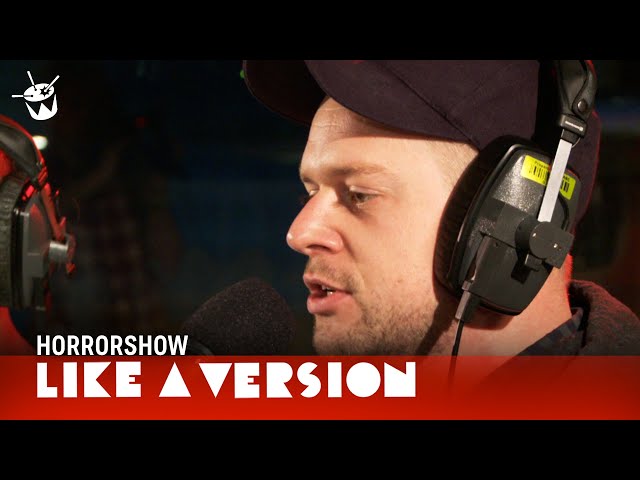 Did the success of King Amongst Many create more pressure to succeed this time out?
Adit: Doing what we do and putting music out there and surviving on that craft, you do question where it’s gonna go in the future and you do need to keep building. So those things do play on your mind, but I just think of it as background noise. It’s always there, but those things are out of your control, so you can’t dwell on them – they’re the attachments that are going to keep you suffering. All you can control is the music that you’re making. We create when we just want to go and make some fun shit, or we just have an idea we want to execute.

Solo: We try not to trip too hard over that kind of stuff – as Adit said it’s out of your control and our job is to just make music that we feel and the rest is up to fate. We started out just making music for ourselves – we didn’t really share it with anyone and I didn’t even tell people I rapped it was such a personal thing. Fast forward to now and we’ve made a career from putting out records and we have an audience we have a connection with, and you can’t not be aware of that. The landscape that we operate in has changed so much. When we started out the interest and opportunities for hip-hop artists in Australia was much smaller, so the goals they were shooting for were much smaller. But as the music has grown and more and more of our contemporaries have shot up and become some of the biggest artists in the country, it does create a higher ceiling. We’ve been involved in some of the biggest hip-hop tours that have happened in this country with people like Hilltop Hoods and Bliss N Eso, and I suppose as you get those opportunities you do get a chance to see where you could take things. We’re not where we were a few years ago where we had to work other jobs and music was secondary, so it’s important keep it all in perspective.

You guys met in Year 7 at high school. Was hip-hop something you bonded over back then?
Solo: We’d always be trading music in our teenage years. Parallel to our friendship was this discovery of hip-hop, and then us eventually creating music together.

Adit: Hip-hop music formed the foundation for a lot of our social interactions – it’s what we talked about, we went to see rap battles on the weekends, we went to parties and danced to hip-hop music… in many ways it was a sort of religion for us growing up as teenagers, and we learned a lot about the world around us through the music and it shaped the way we thought from an early age. Learning about the world through rap music.

Are you glad to have Bardo State finally out in the world?
Adit: There’s always that moment of relief when you hand everything in. If anything, I’m now just hungry to get back in the studio and start working on new music. I’m proud of what we’ve done.

Solo: I’m glad it’s out there where it takes on its own life people can find their own meaning and own connection with it. I’m just excited for us to be finally ready to share our record with the world.