‘Fragile’ is Grace Knight’s latest album and “Lucky Me” its first track. In a life scarred by childhood abuse and vindicated by platinum success with Eighties synth-pop band the Eurogliders, she knows both like old friends. “Even while I was on stage I felt completely worthless,” she remembers of those heady days. It was well into her next life as the jazz diva of Come In Spinner that she realised, “I’m still here. The only possible reason is that I’m OK.”

As part of our Living Legend interview series, Rolling Stone Australia sat down with Knight to discuss her creative second wind, gender representation and how she’s survived a lot more than that video.

You landed in Perth from the UK in 1977. How was the music?
I passionately hated it. I was from London and I didn’t understand Dave Warner’s From the Suburbs. Australia was so rock-oriented. I was listening to Motown. So when I hear, “I’m just a suburban boy”, I’m like, “Fuckin’ right you are.”

Share a first impression of your Eurogliders partner, Bernie Lynch.
I was at my sister’s friend’s barbecue. I knew he fancied me the moment he laid eyes on me. It’s terribly arrogant but it was like, “Put your tongue away.”

You were an item, on and off. Positive or negative in a rock band?
Depends. Stevie Nicks was sleeping with half her band. As did I, and I found it charming. I wasn’t fucking the tour manager like Bernie was though.

How did your creative chemistry work?
There wasn’t a lot because Bernie was always very much the writer. He wrote the drums, guitars, bass, keyboards, brass, lyrics, melody… everything. My job was to read those lyrics and find me in there, which is what I do with every song I sing.

The Eighties was all about big image, big videos… can you describe a peak of excess?
I can remember a lot of cocaine being consumed. You know, we were wankers – but with good cause. We were touring in the States and there were thousands of young kids all singing our lyrics and… American audiences were full of praise whereas in Australia it was like, “Fucking prove it.” So we got on the bandwagon of rock & roll and… it went to our heads a bit. We had arsehole moments, but for the most part we were nice people, having fun.

We have to talk about the “We Will Together” video. Were you talked into that?
Yes and no. It’s a love song and I love Bernie’s stories but… those film clips cost $200,000 to make, so they had to be storyboarded, dressed, set-designed, and between writing the video and shooting, Bernie and I split up! So now I wanted to punch him in the mouth. His new girlfriend is standing in the doorway and he’s on top of me, kissing me. I didn’t mind the acting, but fuck lying underneath him. So you can actually see in the video: I roll him over and get on top, giving his girlfriend the finger while he’s sucking the tongue out of my mouth… and then America wouldn’t play it. Because I was on top! 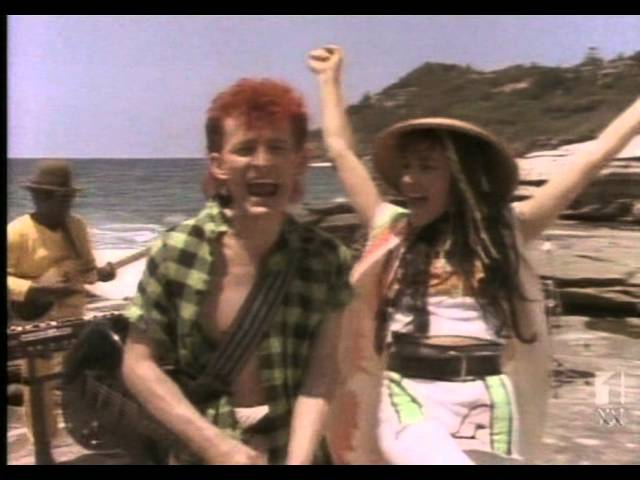 On gender representation. Eurogliders had Amanda Vincent on keys too. Were you conscious of striking a blow?
I was never fussed. People would ask, “What’s it like being a woman in rock & roll?” Well, I’ve never been a man, but I’ve never let anyone overpower me. I hate bullies. Bernie and I used to play this good cop/bad cop game and he’d say: “You be the diva and I’ll be the one who tries to placate.” That role came easy to me, but it wasn’t true.

There’s a line in your book from your school days: “Don’t fight Grace Knight. She’s a mental case, she’ll knock your block off.”
That attitude carried on but the physical [aspect] did not. I learned from some wonderful people. People like Bernie: beautiful souls, gentle souls. I learnt that what was normal to me [as a child] was not normal. You can be a tough nut, but you don’t need to be violent and aggressive.

You’ve said you got paid $300 a week for 10 years. Were you ripped off?
Yeah! It was… for my part, not being smart enough to sit down and say, “Explain what you’re doing with my money.” I saw my role as the chick singer that made the crazy clothes but I didn’t understand the maths and that was an excuse for me to be lazy. It’s not the case anymore.

Come In Spinner with Vince Jones kickstarted your second career in the early Nineties. Was the jump to jazz fearless?
I was petrified. I said yes because I wanted the acting role. Vince was very aloof with me. I introduced myself and said, “Look, I’m a little bit scared, have you got any tips for me?” He said, “Yeah, don’t over-sing.” I thought, “Well great. I couldn’t over-sing if I tried.” And we never saw each other again.

Your 2010 memoir, Pink Suit For a Blue Day. You didn’t write it for yourself, did you…
No. I felt I had found an answer. Being someone who has been abused, you look back at your life and you realise, “All of these decisions I’ve made have been based on a warped sense of myself. I allowed that worthlessness to dictate what I could and couldn’t do.” I came to the realisation that whatever had happened to me was finished. What I did to myself was much worse. When I realised that I thought, OK, I can stop doing that. That was the point of telling that story. Look: you can repair.

You and Bernie have made three more Eurogliders albums these past 12 years. What motivates you now?
Joy. I’ve known Bernie almost my whole life. I was on stage the other night and I look over, and my friend and I are doing something together that’s making all of these people so happy. I look at my friend and I go, “Fucking hell, look at us. This is our job.”