Before this year, the last time Leslie Feist appeared in public was on her short Mettle Tour in 2014. She’d put out the intricately textured Metals three years earlier and wanted to get away from the dense arrangements that defined that LP as well as her breakthrough hit, 2007’s “1234.” “I needed to prove my mettle to myself again after playing live with so many other people,” she says. “I was leaning on them more than I felt I should. I should be able to hold it up by myself.” So she gave it a shot and then disappeared for three years.

Now she has returned with Pleasure, a sharp reflection of her Mettle performances: cutting, emotional songs with sparse arrangements performed only by her and a couple of friends, most notably her frequent co-producer Mocky. Depending on the song, her voice sounds plaintive, distressed or confident. She strums folky chords and divines bluesy riffs, as she feels her way through the sadness, loneliness and “dark nights of the soul” in her lyrics. Despite a few bright moments (notably “Any Party,” with its chorus’ promise of dedication, “I’d leave any party for you”), the album is a statement of frustration that Feist says she’s still trying to understand herself.

It’s an April afternoon, and having misjudged the amount of time it would take her to drive between points, Feist has pulled her car over on a Los Angeles side street to talk to Rolling Stone. “It’s the liminal state of Californian driving reality,” says the singer, 41, who was born in Nova Scotia and grew up in Alberta but now spends her winters in L.A. “I guess I parked near an airport because there’s a tiny plane over my head here.” Her observations are both reflective and matter-of-fact, much like her lyrics on Pleasure, but she has a harder time talking about those.

Since the PR blitz of her 2007 LP, The Reminder, whose “1234” became ubiquitous thanks to an omnipresent iPod nano ad and earned her four Grammy nominations, the singer – a sometime member of indie collective Broken Social Scene – has cultivated a more guarded, almost evasive public persona and focused more on recording personal songs, less on obvious radio fodder. As with the break between the Mettle tour and Pleasure, she has treasured her time out of the spotlight. She enjoyed a year without writing and performing before tackling Metals, and this time she also waited until she felt she had something to say. With the exception of visiting Africa, which showed her how big the world was, she mostly lay low – “It was like a sabbatical or a recharge,” she says – and that’s about as much as she’s willing to say.

“I was having a bit of a difficult time in the last few years,” she says. “I felt like I didn’t know anything. It was like a limbo between feeling something and knowing something. … I’m still in the middle of it, so it’s hard to talk about. The message of the album would be ‘being lost is part of getting there,’ or something like that. I don’t know.”

And what got her feeling that way? “Oh, you know,” she says. “Insert whatever you felt bad about last. That kind of stuff.”

With lyrics like “I felt some certainty that you must have died/Because how could I live if you’re still alive” on the brash and folky “I Wish I Didn’t Miss You” and “It got hard for me to believe in true love” on the Fleetwood Mac–y “I’m Not Running Away,” is this a breakup record? Or did a family member die? “No.”

Well, what was it? “It’s not something I would even be able to talk about.”

Nevertheless, the feelings the songs evoke might be more important than the meanings behind them. The dynamic, almost PJ Harvey–like “Pleasure” is about duality – it’s about pain but she calls it pleasure – and it was sparked in part by a conversation she and Mocky had about sea creatures. “We were eating sushi and somehow got into a conversation about these bivalve creatures living on the bottom of the ocean that just have two emotions: either retract or go toward,” he says. “We liked the idea that, in a way, everything comes down to such simple equations, two basic emotions: a positive and a negative, a pleasure and a pain.” (“That is how we evolved,” Feist sings on the song. “We became our needs/Ages up inside/Escaping similar pain.”) 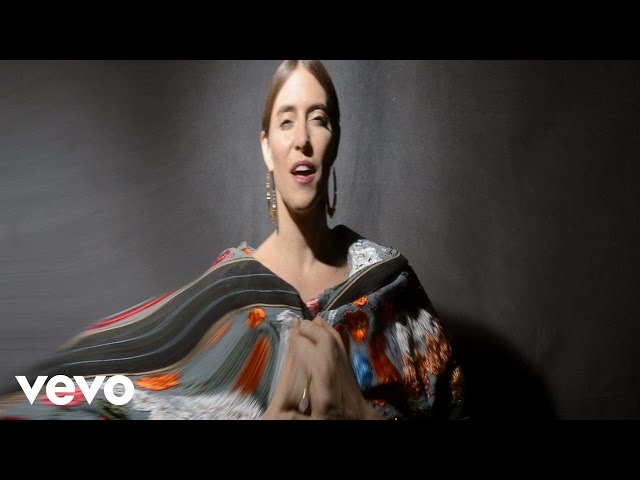 A similar sort of duality plays a role in another Pleasure song, “A Man Is Not His Song.” It begins with the sound of crickets and folky, jazzy guitar, leading to the chorus, “A man is not his song, and I’m not a story/But I wanna sing along, if he’s singing for me,” and it ends with 20 seconds of heavy-metal guitar riffing by her onetime collaborators Mastodon who donated their tune “High Road” to the outro. “I guess I felt it was symbolically like a flamethrower of masculine power,” she says of the sample. “It was the men commenting at the end of the song, sort of a poetry thought experiment. They come in and say, ‘OK to everything you just said, but here are our thoughts on that.’ I was following my instincts when I included that.”

She also followed her instincts on the record’s highest and most uplifting point, the swinging acoustic sing-along “Any Party,” after she and Mocky found their way into a discussion about friendship. “When we were working on the album in Toronto, we went out to a bar and ended up looping back to the studio to work on music,” the co-producer says. “We were having a conversation about how the real test with somebody is if they’ll leave a party with you. It’s one thing to say, ‘Hey, will you come with me to this party,’ but it’s another when you get there and are not feeling it to say to that person, ‘Will you leave with me? Because I can’t do this right now.’ That’s the deeper test of the relationship.”

“It’s a different version of a romantic idea,” Feist says. “If you leave a party with the right person – a person you actually love – they might be able to solve some puzzles for you.”

That sort of gang-of-two mentality is also what led her to want to collaborate so closely with Mocky on this record. She met him in Toronto in the early 2000s, and the two bonded over their backgrounds of both coming from “prairie roots”: Alberta and Saskatchewan for her, Saskatchewan for him. She contributed some vocals to his 2004 LP Are + Be, and he in turn made a remix of her breakthrough single, “Mushaboom,” for her 2006 Open Season comp. And by 2007’s The Reminder, he was credited a co-producer, alongside fellow Pleasure co-producer Renauld Letang. “It’s been constant,” he says. “You need people in your life that just go beyond the latest hype and trend to find the deeper truth of what you’re trying to express as a person, and the night we recorded that song ‘Any Party’ was a moment when we were looking at each other realising, ‘We’re sort of accessing this part of us that comes so natural.’ … When we’re playing together, there’s a certain oneness, or a rhythmic consensus between us.”

“You know how you can feel alone in a room full of the right people, because there’s zero self-consciousness? It’s like that with Mocky,” she says. “To have him playing on the record, both of us were protecting that feeling. Björk has that song, ‘Army of Me,’ and there’s a Canadian songwriter I love called Peter Elkas who has a song called ‘Party of One’ that’s fantastic. The feeling between us is something between those two song titles.”

To try to capture that feeling as authentically as possible, Feist, Mocky, Letang and friends (including Pulp frontman Jarvis Cocker, who cameos on “Century”) recorded the album live on three different occasions in Northern California, New York State and Paris, France. “These songs are a simple rendering of a mood into movement,” she says. “There was no studio trickery of any kind. We did it over a couple of months to give ourselves time. I would go in each time and rely on my body memory for how the song would go that day; I wouldn’t listen to versions from the previous studios.”

“There are all these great alternative takes,” Mocky says. “It’s like something from the golden era of recording where you give it all on the take and it’s either there or it’s not.”

“Recording in different places was a bit of a luxury because we were so light on our feet, since it wasn’t like a 50-person crew; it was just the three of us and some hard drives traveling to different spaces,” she says. “It was almost like a solo album.” 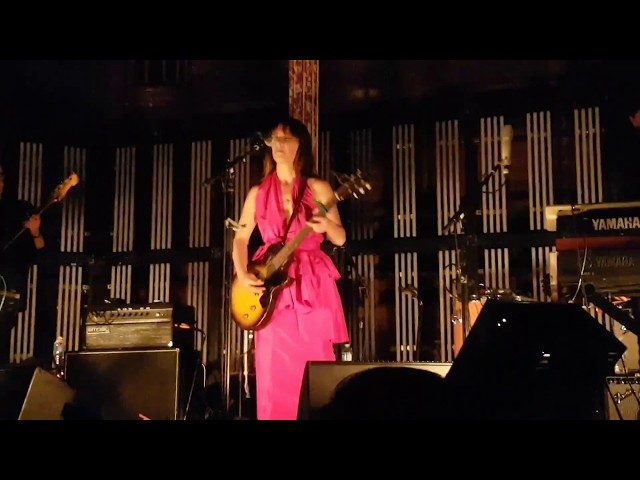 Now that Pleasure is done and out there, Feist looks at it a bit like a time capsule. “Since I was young, I’ve had a natural tendency to take whatever experience is a little bit tangled, unclear or a bit of a sandstorm in my life and not examining it but more putting a lens between whatever I’m feeling and whatever I might be able to say to my 20-years-in-the-future self about it,” she explains. “When I wrote [2004’s] Let It Die, I was a much different version of myself. And now I see what those songs said to me and how I can fold that feeling forward. So I started to get interested in what I could write to 60-year-old or 70-year-old Leslie.”

The songs on Pleasure to Feist are “trying to write about what you know about a difficult situation when you’re in the thick of it.” “It’s giving myself permission to write about that questioning feeling,” she says. “If you’re feeling a bit lost, you kind of double down on feeling bad by feeling bad about feeling bad. Most people close to me do that, and I do that. I’ve found that it’s worthwhile to formulate some version of the story in songs. It’s like putting a Rubik’s Cube together.”

She won’t explain the event that spun her out of orbit, leading her to create Pleasure, but she does have an allegory for what she’s going through. “I met this Colombian woman a long time ago who had gone through actual Hollywood-movie amounts of violence,” Feist says. “She had a terrible youth, and the way she introduced herself to me was saying, ‘I know you heard all about what I’ve gone through, but I am not my story.’ She had this big smile on her face. I remember thinking, ‘There’s power in that.’ She’s telling herself a version of the story that serves her. Life doesn’t have to stop you if something bad happened, and you come that version of that story forever.

“So maybe [Pleasure] is about shifting from that tangle, or that foggy situation where I couldn’t see the forest for the trees,” she continues. “I’m getting a grasp on that feeling by naming it something that had a little bit more aspiration in it. It’s me figuring out how not to tend toward pessimism, or a teenage investment in darkness that stuck with me, as I always have. It’s my own version of alchemy.”