Fats Domino, the genial, good-natured symbol of the dawn of rock and roll and the voice and piano behind enduring hits like “Blueberry Hill” and “Ain’t That a Shame,” died Tuesday at the age of 89. Mark Bone, chief investigator with the Jefferson Parish coroner’s office in Louisiana, confirmed his death to the Associated Press.

A contemporary of Elvis Presley, Chuck Berry and Jerry Lee Lewis, Domino was among the first acts inducted into the Rock and Roll Hall of Fame, and was reportedly only second to Presley in record sales thanks to a titanic string of 11 top 10 hits between 1955 and 1960.

Those hits, which also included “I’m Walkin’,” “Blue Monday” and “Walking to New Orleans,” sounded like nothing that came before. Thanks to his New Orleans upbringing, Domino’s signature songs fused Dixieland rhythms, his charming, Creole-flecked voice, and his rolling-river piano style. His hits, most co-written with his longtime producer and partner Dave Bartholomew, became rock standards, covered by Led Zeppelin, Cheap Trick, Randy Newman, Ricky Nelson, and John Lennon, among many others. Lennon, who remade “Ain’t That a Shame” (first called “Ain’t It a Shame” on Domino’s recording) on his 1975 Rock & Roll album, said the song had special meaning for him: It was the first tune he ever learned to play, on a guitar bought for him by his late mother. “It was the first song I could accompany myself on,” he said in 1975. “It has a lot of memories for me.”

“After John Lennon and Paul McCartney, Fats Domino and his partner, Dave Bartholomew, were probably the greatest team of songwriters ever,” Dr. John told Rolling Stone in 2004. “They always had a simple melody, a hip set of chord changes, and a cool groove. And their songs all had simple lyrics; that’s the key.” Domino himself, who preferred to let his music rather than image do the talking, was typically modest about his accomplishments: “Everybody started callin’ my music rock and roll,” he once said, “but it wasn’t anything but the same rhythm and blues I’d been playin’ down in New Orleans.”

Born in 1928, Antoine Domino was playing piano and performing in New Orleans honky tonks and bars by the time he was a teenager. At 14, he dropped out of high school, taking jobs like hauling ice and working at a bedspring factory as a way to supplement his music. Domino’s career was effectively kicked off at New Orleans Hideaway Club. While playing piano in local bandleader Billy Diamond’s band, Diamond nicknamed Antoine “Fats” — partly in homage to keyboard-playing predecessors like Fats Waller and partly because, as Diamond told one crowd, “I call him ‘Fats,’ ‘cause if he keeps eating, he’s going to be just as big!” Domino was initially hesitant about the nickname, but it stuck.

Later, at the same club, Domino met Bartholomew and Imperial Records head Lew Chudd, who signed Domino to his label. In 1949, Domino cut his first Imperial single, “The Fat Man,” a rewrite of the drug-addiction song “Junker’s Blues” that many consider one of the earliest rock records. Although it didn’t make the top 40, “The Fat Man” was a huge R&B hit and established Domino’s sound and image for decades to come.

From then on, Domino’s hits kept coming. He scored nine gold singles, although he never had a No. 1 record on the pop chart. (Frustratingly, Pat Boone’s vanilla remake of “Ain’t That a Shame” did go No. 1 in pop in 1955.) In his memoir, Chuck Berry wrote admiringly that, in 1955, Domino was making $10,000 a week on tour.

From the start of his career, Domino wasn’t a larger-than-life figure like Presley or Lewis. Married at 20, he was a notorious homebody who eventually had eight children (all of whose names began with the letter “A”). Asked by Rolling Stone in 2007 about riots that took place during early rock and roll shows that featured him and other acts, Domino simply replied, “I don’t know. It wasn’t anything in the music, so it must have been something in the audience.”

Yet Domino’s influence was tangible. In 1968, Paul McCartney wrote the Beatles’ “Lady Madonna” with Domino in mind (Domino would cut his own version that same year). To ensure that bass guitars on his records could be heard above his rumbling piano, Bartholomew would double the bass and guitar parts — a technique later picked up on by Phil Spector for his Wall of Sound. Domino’s dexterous piano style, influenced by pioneering predecessors like Waller and Professor Longhair, also reverberated. “Anytime anybody plays a slow blues,” Dr. John told Rolling Stone, “the piano player will eventually get to something like Fats. It was pre-funk stuff and it was New Orleans and he did it all his way. He could do piano rolls with both hands. He was like Thelonious Monk in that way.”

In 1960, Domino released his last top 10 hit, “Walking to New Orleans.” Soon after, he left Imperial and continued recording for a number of other labels. As with his 1950s peers, he scored few hits from that point on — but more due to changing times than from the scandals or army duty that derailed Presley and Lewis. As Rolling Stone writer Charles M. Young wrote about Domino’s less-than-dark side, “Offstage, he gambled a bit, had a thing for fancy cars and jewelry and was known to cook beans in his hotel room.” 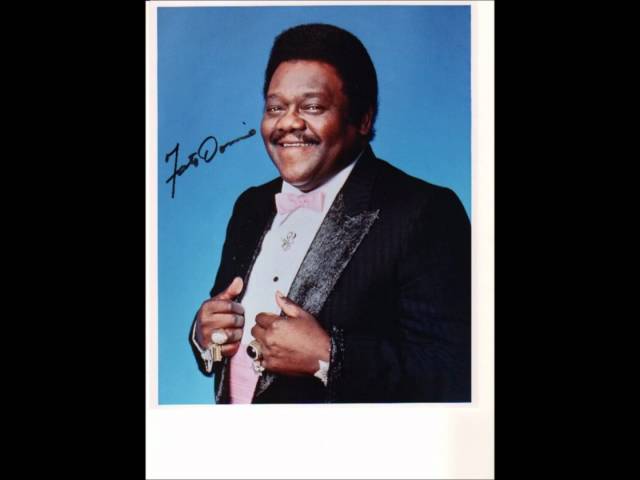 Domino continued to record and tour for decades after his initial success. In 2005, he was back in the news after his Lower Ninth Ward home was flooded to the roof during Hurricane Katrina. After initial reports that he was missing, Domino was eventually rescued and, with his wife Rosemary and one of their children, lifted into a boat. “I ain’t missin’ nothin’,” Domino said after the rescue. “Just one thing that happened, I guess. I’m just sorry it happened to me and everybody else, you know?” In the storm, he lost most of his possessions, including almost all of his gold records.

As disastrous as it was, Katrina also gave Domino a renewed life. Alive and Kickin’, a new album released a year after the storm, became one of his most acclaimed works (RS named it one of the top albums of the year). In 2007, he released Goin’ Home, an all-star Domino tribute album featuring covers by Elton John, Nell Young, Tom Petty, Robert Plant, Willie Nelson, Norah Jones, Lenny Kravitz, and Lucinda Williams.