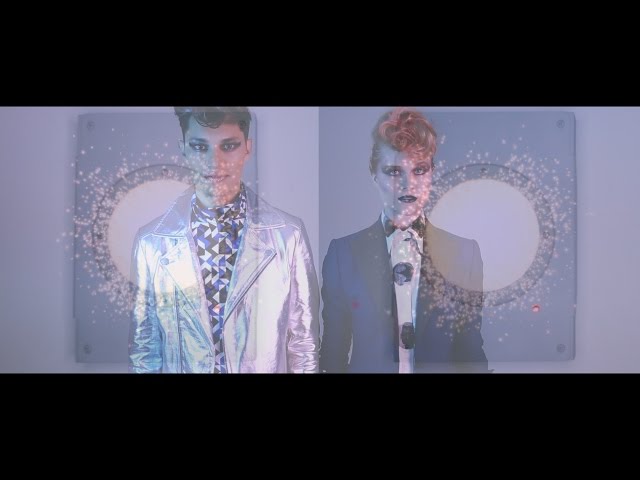 Evan Rachel Wood has made a name for herself in films like Thirteen and The Wrestler, and TV shows like True Blood and the miniseries Mildred Pierce. But those in the know are well aware that the actress is also a formidable singer: See her rendition of the Beatles’ “If I Fell” in the 2007 film Across the Universe, or her sultry take on “I’d Have You Anytime,” from the 2012 Bob Dylan tribute album Chimes of Freedom – or even, if you’re so inclined, the amateur-shot YouTube video of her exuberantly belting out Justin Bieber’s “U Smile” in the dark recesses of a Beijing karaoke bar.

Now, Wood is taking a deep dive into musical waters, teaming with actor and musician Zach Villa in the duo Rebel and a Basketcase. The pair, who met last year while performing together in a John Hughes-themed cabaret in L.A. (their band moniker is a reference to the characters played by Ally Sheedy and Judd Nelson in the Hughes-directed The Breakfast Club), have just released their first song, a buoyant pop-rocker titled “Oh Yeah” whose synth-y, Eighties-esque sound tips the hat to the music heard in some of Hughes’ classic teen films. “It started as a one-off, just for fun,” Wood told Rolling Stone of the collaboration. Adds Villa, “I had had the music for ‘Oh Yeah’ in my back pocket for a year or so, and because the [Hughes] show was so ‘electro Eighties,’ I thought I should work on it. But I laid down some vocals and it was like, ‘God…that sounds like crap!’ Then after Evan and I were in rehearsals together, I knew she was what was needed on the track.”

When the two got together to work on “Oh Yeah,” continues Wood, “something just clicked. And at some point we said, ‘You know, we should maybe make this official, because it’s working.’ And so we just kept going.”

What resulted is Rebel and a Basketcase’s debut full-length album, which will see release this fall. Additionally, the duo is in the midst of scheduling live shows. “The idea,” Wood says with a laugh, “is that we just didn’t want to have to stop pretending to be in a John Hughes film.”

How did this project develop?
Evan Rachel Wood: It started with For the Record Live, which is a theatre company that puts together these cabarets based around famous directors, where you act out the most famous scenes from their movies and sing songs off the soundtracks. I jumped into the John Hughes production [For the Record: Dear John Hughes] because I’m basically a huge fanatic of his movies. And Zach and I wound up onstage together playing a few different characters, including the Rebel and the Basket Case, and we just kind of connected.

Zach Villa: We had this chemistry. I remember the first scene we did together – we both sort of knew each other’s moves and it just felt right.

Wood: We were actually doing the kissing scene from [1987’s] Some Kind of Wonderful! [Laughs] And afterwards everyone was coming up to us and saying how great it was and how great we were together. When the production ended we were both devastated. I was sad to say goodbye to the show, but I was also really sad to say goodbye to Zach. But then we started working on this music, and we just went from there.

How do the two of you work together in Rebel and the Basketcase?
Villa: In previous bands I’ve been in, I’ve gotten a lot of shit from bandmates about being too flashy or for making dramatic musical choices. But the great thing with Evan is that she’s always like, “Do the weird thing!”

Who would you say were some of the musical touchstones for the album?
Villa: We share a love for a lot of bands from the Eighties, and also for female-fronted rock bands. But there’s also a modern element – I love listening to very pop and electro things, like Chvrches and M83.

Wood: And I’m into really super-alternative stuff like Phantogram and Radiohead. And I think blending all those sounds led to something that’s accessible but also completely weird.

Evan, who are your influences as a singer?
Wood: My vocal style, I think, is the powerhouse belter – Alanis Morissette and Janis Joplin and those types of ladies. I’ve always had a very loud voice. And I grew up listening to David Bowie and the Eurythmics and Garbage. Sia is also a huge hero of mine.

Evan Rachel Wood in ‘Across the Universe.’ “I absolutely love acting, dearly,” she says. “But music is different. Because it’s yours, you know?” Everett Collection

You were in a relationship with Marilyn Manson for several years. Would the two of you ever sing together in private?
Wood: We would, for fun. And you know, I learned a lot from being in that environment, and there’s a lot I took away from that experience. It was unavoidable. And he was somebody who was always very encouraging and believed in my ability. It was another link in the chain.

I’ve also heard you’re a big fan of karaoke.
Wood: I am! I have a karaoke lounge in my house, complete with a tiki bar and hula-girl lamps and disco balls. And we actually wrote half the record in that room. The bulk of it, really.

Villa: [To Wood] Our early rehearsals were literally us with your karaoke machine.

Wood: We would take a song that didn’t have vocals and then hook it up to the karaoke machine and sing over it, and try to find a melody that way.

What would you say you’re trying to communicate in the lyrics to these songs?
Wood: It’s a happy, uplifting record. It’s a fun record. You can dance to it. There’s a lot of emotion in it, but I think always with an undertone of hope. I don’t know if I could sum up the album in one sentence, but if I could it would be, “Dude, fuck those guys!” [Laughs] A lot of where the lyrics are coming from is the idea of the phoenix rising out of the ashes. How you can be in an abusive situation, or in an oppressive situation, and survive and come back stronger.

As far as abusive situations, recently you took to Twitter to blast the media coverage surrounding Amber Heard’s allegations of abuse against Johnny Depp. In particular, you took issue with the fact that Heard’s bisexuality was unnecessarily highlighted in several articles.
Wood: I can’t comment on the case or any of the allegations of abuse. But as a bisexual I do think it’s a problem when we exploit that, and group it in with some category of deviant, shady behaviour. I think it’s a really shitty way to do journalism and I do take offence. It’s done just to get a headline, while at the same time holding back a very large group of people that already have so much to overcome. It’s just one more dig. So that’s an issue that’s close to my heart. And it’s on the album as well – my journey to figure out who I was with my own sexuality. Because it can really apply to so many different aspects of your life.

Would you say that music offers you a different sort of outlet for expression than acting?
Wood: Well, my first love was singing. It was the first thing that really felt like it was a part of me. It’s just in my blood. And acting came sort of out of singing, because I did a lot of musical theatre. And I absolutely love acting, dearly. But music is different. Because it’s yours, you know? Usually I’m playing a part in a film that’s somebody else’s vision and I’m helping to bring that to life. But I feel like this is the first time I’m really showing myself to the world.

Do you feel that your experiences in musical theater, and also singing in movies like Across the Universe, have been leading you to this place, where you can create your own music entirely?
Wood: Absolutely. And I think I had to get out of my own way. Because I’m a perfectionist, and I have very high standards for myself. I hold music so close to my heart –  to the point where I was always like, “Well, if it’s not Radiohead, I don’t want to do it!”

Villa: [Laughs] No pressure there!

Wood: But in the end I had to just say to myself, “You know what? You love doing it. You have fun doing it. So just go out there and have fun and do it. Just start.”