From their 2004 debut, Peace, Love, Death Metal, to next month’s Zipper Down, Eagles of Death Metal have sold their irreverence so well that listening to their music for the first time can be a jarring experience. Overt sexual innuendos and ham-fisted album and song titles aside, founding and sole full-time members Josh “Baby Duck” Homme (Queens of the Stone Age, Them Crooked Vultures) and Jesse “Boots” Hughes make damn good straight-up rock & roll.

Related: How Beats 1 DJs Like Josh Homme Are Reinventing Radio

With quotes like this gem from Homme, even the new album’s press release is an exercise in smartass antics: “In an independent study, four out of three doctors say Zipper Down is an eargasm trapped inside a crazerbeam.” It’s an interesting sell, much like the band’s name. They sound nothing like the Eagles or death metal, as you can hear for yourself on new EODM single “Silverlake,” which we’re premiering here. Considering the persistent flippancy of their art, it comes as no surprise that their conversation with Rolling Stone immediately digressed into silly repartee — interspersed with meaningful insights on the art and craft of rock & roll.

Josh Homme: What are you wearing, Boots?

Jesse Hughes: I’m wearing a couple of articles of each of your clothing right now. I snuck into your garage and took them.

Homme: The ones I sent to you FedEx, right?

UPS would’ve been faster, if we’re just being honest.
Homme: What can brown do for you, right?

It’s been seven years since the last release. What made this the right time to do another album?
Hughes: I would start by saying that Joshua and I very rarely have a concept of a certain time, and it’s more like “right on time,” you know what I mean? So I don’t think we were thinking seven years. In fact, Baby Duck, when we were first asked this question, we both looked at each other and were like, “It’s been seven years?”

Homme: Yeah, I think one of the best parts about our relationship is the absence of general knowledge. Like, neither one of us are watch wearers or clock people, so I think what you kind of do is just move at the speed of opportunity. And Boots put out a solo record, and I did a Vultures record and a Queens record and then another Queens record. We’d see each other all the time, so it wasn’t like we had seven years where we didn’t see each other. We’d see each other about three or four times a week, so it wasn’t really on purpose or had no actual motivation at all.

Hughes: Yeah, it really didn’t, man. I really, truly believe we really didn’t think of it like that. It just came back around in the plans a lot.

Homme: And we realize that our lack of putting out a record, that absence of Eagles of Death Metal music, had a really negative byproduct. There were all sorts of Middle East troubles and all these other things, so we’re sorry for that. We didn’t wanna cause that by not putting out music, but we figured now that we’re gonna put this stuff out, most of the world should kind of come back together like before.

So essentially Zipper Down is the Eagles of Death Metal response to terrorism?
Homme: Yeah. We put out a record and human rights are better, the world feels better, people make more money, there’s less anger, people are more respectful to women and to homosexuals, and they’re generally nicer each other, they’re kinder to each other, and that’s why we really felt like it was time to let the healing begin.

One thing that’s always fascinated me with Eagles of Death Metal is that you’re obviously selling the band as this kind of shot-from-the-hip act. It’s funny and it’s enticing, but the music is well done and something that’s resulted from a great deal of talent and effort. How does that creative process work for you guys?
Homme: Well, can I start this one, Boots? Would you like me to? OK, I’ll do the first part. Normally, I rip off the first three Rolling Stones albums, but this time I went from the greatest Rolling Stones albums of all time and technically ended up doing the greatest album ever made, because I stole them. Other than the blatant theft, which really has been going on for years, I think it’s the fact that he and I have so much fun together. We take music seriously because we’re lovers of music, and the music that we like, we really are into and we’re fans of it. And we want to be a great band, so we put that effort into it.

I just think at the end of the day we don’t really take ourselves that serious, you know? That just means that tons of desire and passion for music goes into making it, but we also realize that the best possible scenario for fans of music is when you’re kind of like, “Don’t worry about it. It’s cool, man.”

Hughes: Absolutely. We kind of have a rule with Eagles of Death Metal that it’s the fun show, and we want everyone to belong. You know that kind of attitude where it’s like, “If you’re wearing a Clash T-shirt, you’d better be into the Clash of ’81”? We don’t care if you just got into the Clash yesterday, as long as you’re here.

Homme: Yeah, I think it’s just that sort of inclusive attitude instead of exclusive. For us, it doesn’t matter when you get to the party — just know that it’s here, and here we go. I think that lack of pretension is enticing and sort of a relief when the music’s a little bit serious. Things can get way more, like, consumer-based if you’re into other stuff, you know what I mean? And we’re just not that way. I always look at us like a bit of ginger, no pun intended, on the palate of what’s going on musically.

The whole idea of not taking yourself too seriously as an artist is nothing new, but it’s certainly much more difficult to pull off in the social-media age where celebrity sort of trumps actual art.
Homme: Well, in all honesty, it’s like when you try to put everything into music, there’s no room left to try to make you think we’re cool. We know you think we’re cool.

Homme: You know what I mean? It’s like, there’s no energy left to try to be too cool. We just rely on the fact that that’s already happening, and you get it. I’d rather have a good time. Boots and I have a cool relationship where we just have a cool shorthand, and I’d rather focus on developing that even further. And that’s why we put out videos where we take the piss out of ourselves and our label and whatever. It just doesn’t matter, you know?

Hughes: Yeah, in fact, most of our videos say that if you view them, you’re probably gonna take a piss anyway, so here, take ours.

I wanted to ask about the first single “Complexity.” It makes me think of what might have happened if Steely Dan and AC/DC had a baby together.
Homme: That’s great, I love that [laughs]. As long as your comparison comes from bands that you love, then I love it, because I really think we have — at the risk of sounding like two young hippies on the go — we kind of have a positive mantra. We just want you to pick the things you’re really into and bring them to the table with us. It’s like having a potluck of awesome. So bring your good shit and we’ll bring ours and we’ll just do that.

Hughes: And my thing is, if we’re gonna make a baby, you’d better talk to me in the morning after we do. That’s all I ask. 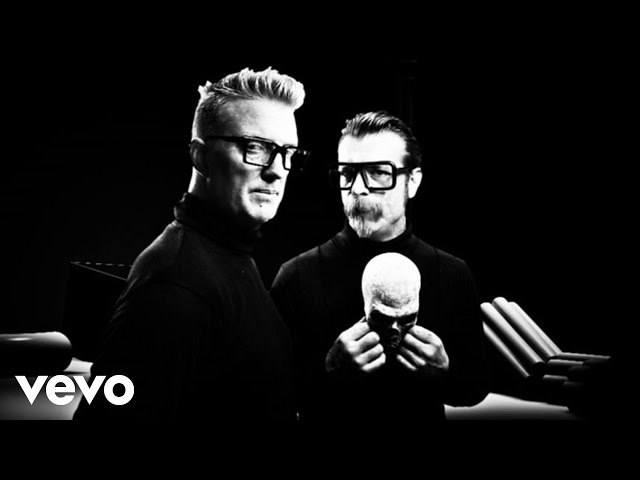 Certainly involve some Eagles of Death Metal tips on spooning and cuddling.
Homme: Yeah [laughs]. But why spoon when you can fork yourself?

There’s such camaraderie with you guys, and the back story is fairly well known with you two knowing each other since elementary school. Was that complete focus on the music there from the very beginning?
Homme: I think the notion of understanding each other is a relief. It’s not a thing you get with everyone you hang out with, and we’ve sort of put all our stock in the fact that we understand each other or can come to some great understanding together.

Hughes: And we trust one another.

Homme: Well, there’s a lot of suction there, yeah.

Hughes: Boy, I’m a weird dude. I’m a very strange dude, and with Joshua, I’m able to hang my hang-ups at the door, and he’s much bigger than I’ll ever be, so I’m not worried about anyone picking on me — you know what I’m saying?

It kind of goes back to what we were talking about a moment ago as far as the focus on the music and being less serious. I think of Chuck Berry, Little Richard, Jerry Lee Lewis, and so many others for whom that really was the approach.
Homme: I think that at the end of the day, you want to be excited and surprised by something. And you want to feel like the thing that you’re gonna spend your time on is something where you feel like it’s different. And I also feel that because we have an environment where people can just be themselves and show up, that when we do get serious and say, “Hey, I wanna get serious for a moment,” people are like, “Yeah, cool.”

Because they’re not being asked to pretend to be something they’re not in our world. When people come to an Eagles show, you’re supposed to only just be yourself. You don’t need any sort of pretense, and I think when you ask someone to kind of bring it down and get serious in that moment, everyone’s being themselves, so they’re cool with that. And at the moment when you do get serious, it’s sort of a needed ingredient to the recipe of what we’re doing.

Hughes: And you hit the nail on the head, Baby Duck, when you said that we’re fans first. We are fans first. We love this, we believe in it, and we’re going, “Anyone else a fan of rock & roll? Cool. Come here and check this out.”

Homme: And I think this record is made from a fan’s perspective. Like, what would I wanna hear? And that is a good spot to be coming from.

Hughes: I came up with a great analogy for what the music is. It’s bending George Clinton over a couch and butt-fucking him using Little Richard as the dick and the Rolling Stones and Chuck Berry as the balls.