Tell us about the conception of your new album…
No-one knew I was making this album until it was pretty much done. I smashed through most of it before I realised I had an album on my hands, I was just writing. When I knew I had it 70 per cent how I wanted it I revealed it to my team, then got the remaining 30 per cent done. But the finished product was there for a while, like at least a year.

Was it hard keeping the album a secret?
Not really. I wrote a lot of songs, so I had 20 fully finished songs and brought that down to what the album is now. I wrote a lot. I’m never in the mindset to make an album – I’m just always writing. I just take stock and think “What have a I written in the last year or two and how can you put that together as a project?” I realised a selection of them had the same kind of vibe that I really wanted to follow.

How did you go about signing to Illy’s label ONETWO?
I got the opportunity to do support for Illy for his Swear Jar tour last year, and the conversation came up around then, but everyone was out partying and it would be like “It’d be dope if you signed to ONETWO!”, and I’d be “Yeahhh!” and then I wouldn’t hear anything about it [laughs]. Then one day the conversation came up again and it gradually became a real thing. So I was happy it wasn’t just drunk talk, basically! It worked out well.

You’ve been independent up until now. Why sign to a label?
I’ve always been reluctant to sign to anyone, but the big thing about ONETWO and Unified is they’re super about the artist, so the first thing I said to them was the creativity has to be mine, and they were just instantly like “Yeah, why wouldn’t it be yours?!” I’ve been in other situations different to that so for them to have that response was just an instant “You are the right people!” Having that backing and a team, it’s super crazy. I’ve had people try and influence me in a certain direction in the past. Not forcefully, but there is heavy influence. I think every artist that gets in the industry will find that in one way or another.

In what ways have outside factors tried to influence you?
Outside influences were very much like “You should be saying these things to get people’s attention”. I was being steered toward certain subject matters. In my musical journey I’ve always been open to suggestions, like “Lemme give it a shot – if it works it works, if it doesn’t, what’s the harm?” But this album was very much just what I wanted to do – there was never an issue of “What do other people wanna hear?” With this album, it was always just what was naturally wanting to come out. With other projects I’ve sought opinions, but not this time. I’ve always gone out and shown people demos and asked them what they think, and of course everyone has their own opinion.

What was your creative process when recording Belly of the Beast?
The music comes first, in general. If I ever write without music, I never use it. So I use the music to help me decide the direction of the lyrics. With the production, it kicked off after the Illy tour. This dude Dylan Joel was the other support, and his bass player is also a crazy jazz guitarist named Patrick Gabriel, and he’d started producing, so he was backstage showing me beats, and one wound up on the album for the track “Please, Tell Me Bout It”. I remember losing my shit backstage when I heard it and was like “I need to do something to this!” So that sort of set the tone for the rest of the album, and me realising the sounds I wanted on the album. I wanted a lot of live elements – pretty much every song has live guitar, live bass, percussion or some other instrument happening. I was really adamant about having live bass and guitar in particular and giving the album that jazz/funk feel as well. So Pat – he goes by the production name PattyBoomba – he’s the main producer for a lot of the album and I kind of executive produced it all. I’d take in most of what he did and made the additions that I wanted. I think two of the songs I produced, and the rest was me going out and finding musicians and instrumentalists and building from that. Pat wound up producing six songs, and he set the bar for the sound I wanted. 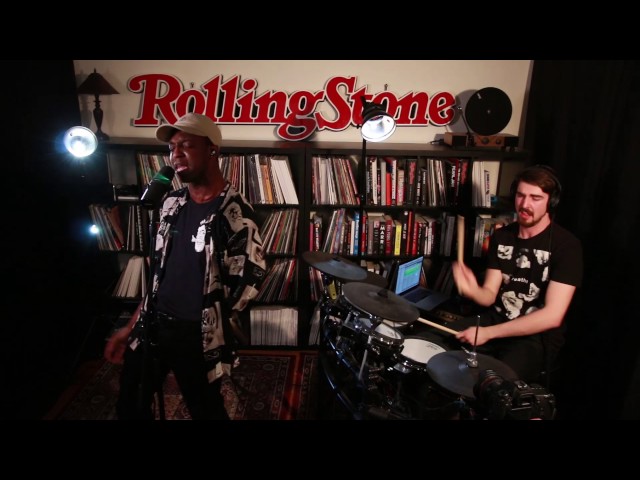 What were the main influences on Belly of the Beast?
This album was me taking a step back and not only viewing the world around me, but trying to step back and view myself in a third-party kind of way. In the past I’d see flaws in other people, but when I take a step back I can now see those same flaws in myself. A lot of the album is about that, that reflection. That became the underlining theme for the album that I really wanted to dive into. Sonically I wanted the album to match that tone too, so I wanted that soul, jazz, funk vibe, which I’ve kind of always been into anyway.

What’s your lyrical process entail?
Like I said, I always like to have the music first. I wanted to take the time with my lyrics and poetry with this album. In the past I’ve focused on the production side and sacrificed the poetry aspect of it. With this album I wanted to focus on me as a poet. I didn’t feel like I was doing enough writing and challenging myself lyrically, and there was a lot more time spent on getting that right this time out. I really wanted to challenge myself lyrically and flow-wise, which I think I did.