Green Day were midway through a year of downtime when they learned they’d been selected to enter the Rock and Roll Hall of Fame. The group could have easily showed up, played a few hits and called it a day, but it was determined to find a way to make the event truly special for longtime fans. So Billie Joe Armstrong and Co. decided to book Cleveland’s House of Blues two days before the big night for a once-in-a-lifetime show. They took the stage as Sweet Children, their original name, and played a set of their earliest songs with founding drummer John Kiffmeyer, who left the group in 1990. Then they blasted through 23 songs as Green Day, taking that energy into Cleveland’s Public Hall two nights later when they were formally inducted into the Hall of Fame.

Armstrong called up Rolling Stone a few days after the big night to chat about his time in Cleveland and give an update on Green Day’s in-progress new album.

Are you still coming down off the high of that night?
Yeah. It’s sort of like a natural LSD. The whole thing was just surreal, but instead of LSD it was reality. We had a great time. It was just a wild weekend. There was so much going on.

Let’s start with the House of Blues show. Who had the idea of calling up John and inviting him?
Well, John and I have been in contact here and there through the years. One day we just went out to breakfast and I threw out the idea about doing a show. He was immediately into it, which was surprising because he said to me, “You realise I haven’t picked up a pair of drum sticks since 1997, right?” And I said, “You know, it doesn’t even matter. Let’s just go up and have a good time. I think it would just make a lot of fans super happy.”

Related: Flashback – Green Day and the Palace of Wisdom

I’m sure it felt surreal to look to the back of the stage and see him behind the kit.
Yeah, it’s funny because of all the antics and things that he did onstage [when we originally played together], that was exactly what it was like. I mean, it’s just natural for him to be that way. He’s one of the original Gilman Street clowns. For me, having him there was really important. A lot of that past disappeared, especially after Dookie.

I was just expecting to just go up there and play some songs and have fun, but there was this spirit in the room. A lot of the people at the show that were a bit younger were probably like, “Who the fuck is this guy?” when he walked out.

But for the hardcore fans it was a dream come true. Nobody ever imagined you guys would play together again.
Yeah, absolutely. And not only did we play a Sweet Children set with John there, there were certain songs that we haven’t touched in a long time that we added to our set, like “Private Ale” and “Stuart and the Ave.” They’re songs that are sort of more deep cuts into Kerplunk and Insomniac.

You guys even played the “Green Day” song for the first time in forever.
Yeah, oh my God! Playing that was a trip. [Laughs]

Moving onto the night of the induction ceremony, how did the “Boys” performance with fellow inductee Ringo Starr come about?
We had been asked if we wanted to play “Boys” with Ringo. It’s funny. We were up onstage sound checking and someone comes up and says, “Hey, whose idea was it to get Green Day to play with you, Ringo?” And he goes, “It was my idea, and I was right!” We just laughed and were like, “Oh my God, this is so cool.”

I know you’re a Beatles fan, so to play one of their songs with Ringo must have been insane.
Yeah, man. That’s the part where it gets surreal. It really does feel like a dream. One second you’re playing with Ringo onstage… And just the fact that I was so far away from Mike [Dirnt] and Jason [White]. I was on the side with Ringo. That part literally felt like a dream.

And then when we we’re standing onstage accepting the award and you look out. You see Patti Smith and you see Alice Cooper. It’s like you’re waiting to wake up. I’m waiting to turn over to my wife and say, “I had the craziest dream last night, check this out.” All of a sudden, it turns into something out of The Wizard of Oz or something. [Laughs]

You had the great line in your speech, “It’s like my record collection is actually sitting in this room.”
Yeah, it really was. I’m an Alice Cooper fan. I listen to him pretty often, so just seeing him sit in the crowd, I was blown away. Everybody was out there, it was just crazy. I mean, shit, Jerry Lee Lewis? I mean, give me a fuckin’ break! [Laughs]

I imagine you met a bunch of people that hadn’t previously met before, right?
Well, yeah. I hadn’t met Ringo before. I met Patti Smith years ago when Roseanne Barr tried to do a late night, Saturday Night Live skit comedy thing. This is back in the mid-1990s. She was the other performer. It wasn’t long after her husband [Fred “Sonic” Smith, of the MC5] passed away. She comes up and here I am singing these songs about drugs and beer and being a loser. She said something profound. She goes, “You were one of Fred’s last favorite bands. Him and my son, they really bonded over Green Day.”

Then she goes, “Just remember, try to say something positive. Just do something positive.” It was really like, “Wow, that’s a pretty cool thing.” And it always stuck with me, my whole life. Now, I don’t know if I’ve ever had the most positive messages in my songs in the world. But she wasn’t coming from a “Shiny Happy People” type of positive. It was like, something that had a deeper meaning, that could inspire.

The vibe at Public Hall felt really special that night. Did you pick up on that?
Yeah, it was a good year. I think a lot of the time, the Hall of Fame people are dealing with a lot of inner turmoil with different bands, and the politics of different bands. This was the first year I can remember where there were no hard feelings, especially between me and my band.

You know, Joan Jett is always current, no matter what. She’s always looking for that next riff and the next lyric that’s going to inspire somebody. Also, Bill Withers’ speech was really funny and really heartfelt. It was just a good night.

I know you’ve been to lots of previous inductions, but this must have felt very different because it was your night.
Yeah. I mean, I was freaking out. I was beyond nervous. I was just fuckin’… I don’t even know how to put it. Adrienne, my wife, she was like, “Why don’t you go over and say hi to so-and-so?” And I’m like, “I can’t get out of my seat right now. I’m about to have a coronary.” It was really freaky. It was kind of like being at your own wedding and your own funeral.

You guys are much, much younger than most people that get into the Hall of Fame.
Well, even people that would be our contemporaries, a lot of these guys would be in their fifties already. But we started young. This is my high school band, and we just kept going. So there’s been a lot of life within the time period that we’ve been around. We’re really fortunate in that way.

You looked like you were having a lot of fun when you took that guitar solo in “I Wanna Be Your Man” at the end.
That was great. Paul Shaffer did a great job. It’s tough trying to coordinate a bunch of musicians that probably have ADHD and OCD and a couple of other initials here and there. It was really fun. He just said, “Take a solo.” I’m like, “All right, cool.” 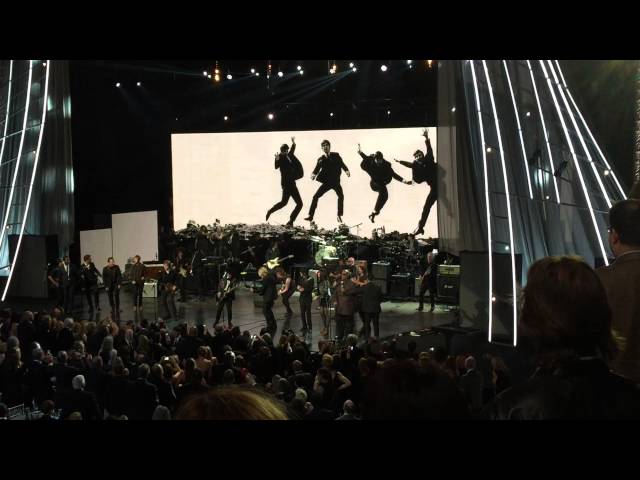 You guys have been on a long break. Do you feel revitalized as a band now? Do you feel more motivated to sort of get working on new work?
There’s definitely a great spirit going on. We’ve always been pretty charged up. Before we found any of this out, I had already written a few songs and everybody was really excited by them. And then we heard about the Hall of Fame, and we were just blown away. Yeah, I mean, we’re going to take our time. We’re not going to try and pull off some, like, victory lap over this because I definitely want the music to come from a real place and be inspired, not just because we got honored or anything like that, but because we’re honoring music. We want to work on them, and we want to make a great album.

If you had to guess, do you think there will be a new album next year?
I can’t say.

I saw Rob Cavallo say that there’s five new songs that he loves.
I’ve got, like, four or five songs right now. I’m gonna take it really slow. I’m just gonna make sure every moment is inspired and that we have something that’s really special to us. And right now with the songs that we have, it’s going in the right direction.

Tell me your favorite moment from your entire time in Cleveland.
Wow. Um… I think it was playing with John, just because it was something I never expected to ever happen again. And when it did, it was really fun. And I think there were some old friends in the crowd that really appreciated it. Don’t get me wrong. Tré Cool is the baddest drummer on the planet, but that was really cool to bring John out. And he had a good time, too.

I thought I head somewhere that you took your kids bowling while you were in town?
Oh, yeah. My family went bowling at a bowling alley a couple of blocks away. My mother’s a really good bowler. [Laughs]

Did fans in town for the Hall of Fame see you? Did anyone bother you?
No one, really. I kind of snuck in there, real low-key. So, no, I didn’t get any hassles.

Does part of you feel like an elder statesmen now that you’re in the Hall of Fame?
I don’t like the thought of ever feeling like royalty, because I still feel like I’m the jester, you know? It just felt good. We were all enjoying it, and the energy in the room felt good. But as far as an elder statesman, I don’t know. I always feel like I’m a bit lost. [Laughs] On one hand, I was an older guy when I was 17, and then I feel like a younger guy when I’m 40. I don’t know. I feel very fresh and invigorated.