Scottish trio Biffy Clyro consider their albums to be trilogies. So when they approached their seventh, Ellipsis [out July 8th], they took the opportunity to wipe the slate clean and start again, forsaking the progressive, arena-friendly anthems of their previous three albums for something more diverse – hence the incorporation of trap beats, Americana influences and black-metal blast beats into their trademark rock-oriented fare. Singer/guitarist Simon Neil explains the thinking behind their new record…

You’ve said that on this album you’ve “forced my intensity at people who let us down”. Why take that tack now?
I had my first crisis of confidence about being a songwriter last year. For the first time I felt like I couldn’t write a song that was any good. And I think most of it was in my head, but I felt pressure from the record company and pressure to write another Biffy record, and I needed to break free from that. So I turned my energies outward and thought about some people that have been kind of friends over the years, but you know sometimes you’ve got people in your life and they’re kind of friends, but really when you think about your relationship with them it’s actually more aggro than friendship? So there’s a couple of people I feel have been trying to keep me down and I thought, fuck it, I’m going to come out and scream my head off on some songs on this record and aim the anger outwards for the very first time.

Do those people know who they are?
To be honest, the couple of people it’s about are probably too arrogant to know it’s about them. And that’s part of the problem. They’re too up their own arse to even notice, and I’m not going to give them the pleasure of telling them. [Laughs]

When you were having that crisis of confidence, is there a logical side to your brain that says, “I’ve written six albums, I’ve played Wembley, I know what I’m doing…”?
Now when I look back I think it was kind of illogical. I wasn’t in a particularly positive state of mind at the start of last year, and I think part of it was because Biffy have become bigger than we ever anticipated. For the first time when I was sitting down writing I was almost thinking about being on a big stage and playing to lots of people, and I’ve never written music with anything like that in mind before. I don’t want that to infiltrate our music, I don’t want to be trying to make our band bigger, that’s the opposite of inspiration to me. And I just needed to remove myself from Biffy’s seventh album. I wrote a bunch of songs not specifically for Biffy, I ended up making an electronic solo record last year called ZZC that will hopefully come out some time next year. But I needed to do that, I needed to set the guitar down and not worry. I just got stuck down the rabbit hole really.

In “Howl” you sing of being “explosive and volatile”; in “People” you sing “I have the cruelest mouth; I’m a man that you should never love”; and in “Re-arrange” you sing “I got a lot of rage and I’m struggling with ways to control it.” Even after you found your muse you appear to have still been in a pretty bad place…
Yeah, you’re right. I think for some reason, music I write always comes from a sad and negative place. When I’ve been in a great mood I’ve never felt like writing a song. So there’s some anger directed at myself, and there’s a lot of trying to change on this record. Instinct was something I lost last year when I couldn’t write music, and I feel like there’s a lot of animal metaphors on this record. For some reason the lyrics have come out that I’m equating being like an animal or being like a wolf and guarding our land and looking after our own with being confident and following my instincts, cos that’s what we’ve always done. Whenever I’ve written music for Biffy, I’ve always followed my instinct. I lost that last year, so I think that’s why there’s a lot of animal references.

Is there ever an element of self sabotage? Of making sure things are never too good in case it robs you of creativity?
I don’t know, that’s a tough question. I don’t think I self sabotage, but it is something I’ve considered in that I do have a slight fear of being overly happy or content or comfortable, cos I do think the inspiration goes hand in hand with seeking something out and trying to find answers. There probably is an element of that that I’m not aware of, but it’s certainly not a conscious thing. 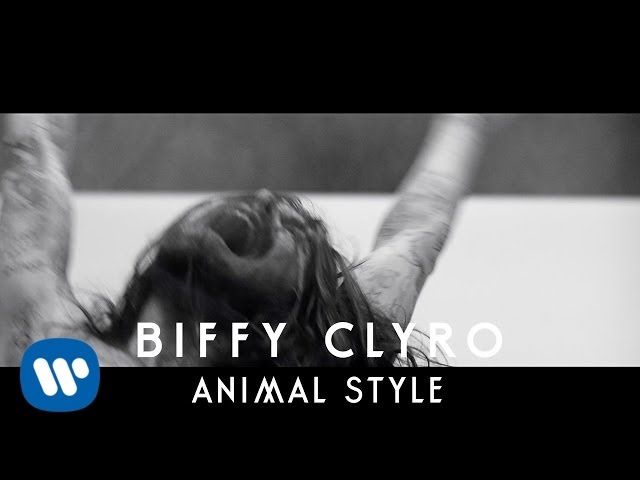 Ellipsis is your seventh album. Typically, records this far into a band’s career don’t tend to be their classic. How did you try and combat that?
My whole M.O. on this record was, no one needs a seventh Biffy Clyro album, but they need this seventh Biffy Clyro album. So we had to force ourselves to work differently. We really wanted to discover new things about our band, and we worked with [producer] Rich Costey, and he’s been a fantastic person for us, cos he doesn’t really have an interest in recording a band live in a room. And the three of us in a room recording, I feel like we’ve almost said everything we can say in that regard, and we wanted to reshuffle things and almost make a studio record; a record where we’re not worried about standing in a room and playing or playing in a practice room. And that was a conscious decision, cos most of my favourite bands didn’t even make it to a seventh album, and the ones that do have normally switched off well before their seventh. I just really didn’t want us to fall into that hole. And I’m sure some of our fans will think this is our worst record and some will think it’s our best. I believe it to be our best. I think we’re still moving into new territory. I genuinely think we’re still unearthing what we can do as a band, and once we fully materialise what’s in our mind I think it’s going to be even more exciting.

Given that you consider your albums to be trilogies, did that allow you to approach Ellipsis as though it was your first record?
Yeah, spot on. The way things happen, moving to a major label on our fourth record, I think that was really healthy, certainly for this band. We made [our first] three records of prog-metal kind of complex fucking mania, and then we learned how to make big, expansive records [on the next three], and now it’s time to discover something new and journey down a new path. And because we do things in trilogies we’re hoping to work with Rich Costey on the next two records and really explore the studio and continue to work with drum machines and programming. We’re always going to be a fucking rock band, but we want to explore that. And then after album nine we’ll move onto something else, and I’m really excited cos it gives us a reason to keep evolving. I have no interest in being an autopilot band.

Is it true Ellipsis took as long to record as your last album, Opposites, which is a double?
Yeah. We anticipated being [in the studio] for two or three months, but the way Rich works, every day is basically a school day. It was all about exploring any ideas we had. We would spend three days working on a drum loop, and that’s something we’ve never done before. So it ended up going on three months longer than we anticipated. It ended up taking exactly the same amount of time as a double album, which is fucking embarrassing! [Laughs] But we had to do it, we had to get stuck in in the old fashioned way and discover what these songs were telling us.

You recorded the album in L.A. What did the three of you get up to away from the studio?
We had a lovely house up in the Hollywood Hills, so we were kind of in the lap of luxury, which was a real victory. Any band that signs to a major label, get a fucking nice house to make your record right! Just take them for every penny! [Laughs] It was magic, we went to the Chateau Marmot for a few nights, and we ate well. Our proper party days are over, but we had one night out where we were hanging out with Royal Blood and, believe it or not, Duran Duran. It was really cool to talk to [bassist] John Taylor. It was really funny. Cos he’s empathising with me about our third record, and he was like, “Yeah, our third record was fucking tough too”, but he’s talking about fucking Rio or something. And I’m sitting there going, “Yeah man! I know how it is!” [Laughs] He was so kind to me, he was such a lovely guy, but at the same time I’m talking to him I’m going, we were playing in fucking Coventry on our third record, you were playing Madison Square Garden, mate!