The night before the deadly Astroworld Festival in Houston, Darius Williams and dozens of other recently hired Contemporary Services Corp. staffers attended a five-hour orientation to work the ill-fated event as newly minted unarmed security staff.

They were photographed, fingerprinted, and asked to take a state licensing exam for Level 2 security personnel that included questions about when physical force, even deadly force, might be a justified response, Williams says.

“If you look at my resume, I only have hospitality and retail experience,” Williams, 32, tells Rolling Stone. “It felt like they just needed bodies, like they were hiring anyone who passed a background test. They even increased the bonus they were offering.”

Williams says the pay offered by CSC in the job posting he answered was only $10 to $13 per hour. But he says the listed bonus of $40 per day was verbally corrected during the orientation, upped to $120 for anyone who completed both days of the weekend festival.

The testing started around 9 p.m. It was “open book,” with the instructor “highlighting” the answers in a simultaneous presentation and encouraging the new hires to work with their “neighbors,” Williams recalls. 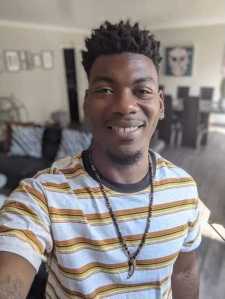 “There wasn’t anything specific to a music festival. Nothing regarding crowd control or what to do if a crowd surges. It definitely wasn’t specific,” he says of his training. “We all just wanted to hurry up and get out of there because we were tired and hungry and had to be at the venue at 7 a.m.”

When he arrived at NRG Park the next morning, Williams says he was led to the front entrance of the festival and asked to work in the area with the metal detectors. “That made me uncomfortable,” he says. “I thought I might be an usher or ticket taker. I bartended the Playboi Carti concert there two weeks earlier [for a different company]. People knocked over the metal detectors and trampled a guard. I knew it was going to be crazy.”

When Williams voiced his unease and asked for another assignment, he purportedly was told he could patrol the perimeter on Kirby Drive, looking for people trying to sneak in. “I would be alone doing that, with no walkie-talkie or anything,” he tells Rolling Stone. “It seemed crazy and super-rushed. I felt like my safety was in jeopardy. I needed the cash and wanted to be part of a fun event, but I had a bad feeling, so I decided to leave.”

Willams says he chose to share his story Tuesday in the hope that his personal experience with CSC, combined with the lawsuits piling up and pending investigations by law enforcement, might shed some light on what led up to the crowd-control catastrophe that claimed the lives of eight people during the Travis Scott performance at NRG Park on Friday.

At a press conference Saturday, Houston Police Chief Troy Finner said 528 police officers and 755 security officers were working the event in what organizers considered a beefed-up safety plan. Williams, who first spoke to TMZ.com, said that if he was counted as one of the 755, he shouldn’t have been.

“They’re trying to make it sound like they had this massive security presence, but if I’m one of the 755, and they’re counting the people in my class, that number is definitely misleading. We weren’t trained to handle a large-scale event or mass gathering,” he said.

CSC representatives did not respond to multiple calls for comment from Rolling Stone on Tuesday.

Already named in six lawsuits as a lead company in charge of security personnel at the deadly Astroworld Festival, CSC was due to be listed as a defendant alongside Travis Scott, Drake and Live Nation in another mega suit with scores of plaintiffs set to be filed Tuesday night by lawyer Thomas J. Henry.

“CSC claims to be a leader in crowd management. We want to know how they planned for this and how they handled themselves. We know CSC didn’t stop this concert for 38 minutes after an emergency was declared,” Henry tells Rolling Stone. “We think the evidence is going to show people actually died during that time.”

“We’re looking at all aspects of the management of this company,” he said, claiming his firm’s search of court dockets around the country turned more than 60 prior lawsuits unrelated to Astroworld.

CSC touts itself on its website as the “world leader in crowd management and event security.” The 54-year-old company based in Southern California says its enviable client roster includes 170 stadiums and theaters, 120 schools and close to 50 convention centers. What it doesn’t mention on its website are the dozens of lawsuits filed against it by event attendees, or the California class-action lawsuit filed by employees that settled for upwards of $3.6 million on Jan. 8, 2020. The underlying claims in the employment suit alleged failure to pay regular and overtime wages, failure to provide required break and meal periods and asking employees to supply their own equipment such as flashlights.

Employee training is the subject of at least one pending lawsuit filed against CSC in Los Angeles County Superior Court. In that case, Jillianne Paladino-Boyd claims she was attending a James Taylor concert at the Hollywood Bowl in Los Angeles on June 1, 2018, when she was struck on her legs, “tackled to the ground and handcuffed” by CSC security guards after she couldn’t find her seat and “attempted to pull away” from a show staffer who “grabbed” her arm.

In its answer to Paladino-Boyd’s complaint, CSC “denies” any knowledge “of the alleged unfitness or incompetence off any employee” at the concert.

A former CSC security staffer who was trampled by gatecrashers at the Ultra Music Festival in Miami also sued the company, and others, in 2014 saying she was “crushed” by a stampede in an area CSC and other defendants had identified as “vulnerable” but failed to properly secure.

Erica Mack claimed she was unconscious, with blood flowing out of both of her ears, when she was discovered and rushed to a hospital with head trauma and a shattered leg. She underwent multiple surgeries, was hospitalized for two weeks and will live with permanent injuries for the rest of her life, the lawsuit said.

According to Deadspin, the University of Houston even terminated its contract with CSC last December after the company’s security guards allegedly assaulted Cougars fans celebrating the school’s AAC Championship.

The school’s athletic director, Hunter Yurachek, said he was “disappointed and angered” by the response captured in videos that show CSC staff tackling and punching students, Deadspin reported.