The international phone line crackles to life. An enthused, yet apologetic, Alex James greets me from the other end. Wires have been crossed and he’s been waiting in his Paris hotel room for thirty minutes for the elusive connecting call.

“Sorry for the mucking about. I don’t know what’s happened”, James, best known in his role as bassist for UK pop group Blur, chuckles before immediately switching his attention to the band’s current tour.

“The shows have just been spectacular, absolutely brilliant. People loving the new record and we’re loving playing it. Happy days.”

The current tour is off the back of the band’s (unexpected) new album The Magic Whip. James, although more comfortable nowadays in stables on his farm than on stadiums in front of thousands of fans, is candidly open about not only the record’s origin, but also their decision to return to Australia this month, following their controversial tour cancellation in 2014.

How much of the new record are you playing?

These are bigger festival gigs, so we’re doing a bit of everything — right from the first hit to the latest one. The new album was recorded so quickly, kind of like how they used to make records back in the ’50s, just get a bunch of really good musicians in a room and just do it all really quickly. So they do work really well live, because it’s basically just the four of us playing together. It’s not like there’s loads of studio trickery or anything. Studio trickery is all about making music sound like it’s being played by brilliant musicians. Because we’ve spent so many years playing together we can do that — we’re very lucky to have that musical relationship with each other. That’s something thats evolved from years and years of playing together and its a wonderful thing. Something we don’t do that often, so it’s lovely when it happens.

With the new record and the unplanned way in which it was recorded, do you think that benefited the creative process?

Yeah, the story was we all went our separate ways in 2003. I got married and moved to the country and worked on other projects with other musicians. Everybody just needed to do their own thing. But we got back together — a kind of reconciliation in 2009. Then did the best gigs we’ve ever done and I think everybody thought that would be a good place to leave it.

But then in 2012 we were asked to do a big show to mark the end of the Olympics in Hyde Park in London. I think we all thought that was a good reason to get back together — something of that magnitude and importance. The Olympics was such a brilliant thing for Britain, we thought we weren’t going to be able to organise it properly, thought we were going to do rubbish, but it was a massive success, we won loads of medals and the whole country was captivated by what happened. On the last day in London, [everyone] was ready for a big night – so that show was the best show we’ve ever done. We came off stage going “bloody hell, that’s alright [laughs] let’s do a bit more of that”.

We thought we’d go to play concerts in places we’d never been before — everywhere from Uruguay, to Jakarta in Indonesia, and just far-flung places. We were really shocked by how young the audience was, how big the shows were — it seems as though the legend of the band was grown since we split up. So we’re loving doing these shows and loving playing together.

Then [the new record] just happened when we got stranded in Hong Kong. We were supposed to go down to Japan to do a show there, but it got cancelled at the last minute. It was too far to fly home before the next show, somewhere else in the far east. So we were all there with our guitars and nothing to do, disconnected from the complicated lives we’ve evolved outside of the band. It was very much a spontaneous, spur of the moment thing. Let’s just go to the studio and play together just because we like doing. It wasn’t like we were booked into a posh studio with Pharrell Williams making this big comeback record, it was just really relaxed, enjoyable and we were all in the exact right frame of mind. So, it really flowed. We were missing our families, but also in probably the most exciting city in the world right now. Hong Kong has a lot of important at the moment, it feels like the link between the past and the future, and east and west. So we were very lucky that things just seemed to fall out the way they did.

Did you think at the time it would become a record?

It did feel at the time as though it was the best stuff we’d ever done. I was completely exhilarated and then six months went by and nothing happened. And then another six months went by and nothing happened, and then another six months. I didn’t have any traces of the recording and I found the songs would haunt me. Particularly “New Worlds Towers”, the second track on the record, I’d wake up with that in my head some mornings. It was playing on my mind. Then I remembered I had a camera with me in the studio and whenever we’d do something that was good the engineer would push record on the camera. So I watched those films, poured myself a big glass of wine and started working my way through these clips. Even though it was recorded on a rubbishy camera microphone you could just hear that it was all there. The grooves were there, the songs sounded great, the playing was amazing. Oh god, what a shame. So I poured myself another big glass of wine [laughs] and thought “what a bloody shame?” That was a Friday, late October last year, and then on the Monday after that, Graham [Coxon] called me out of the blue and said “you know those recordings we did in Hong Kong, I think I might go and have a look at them with Stephen Street [producer], I think they were really good”. 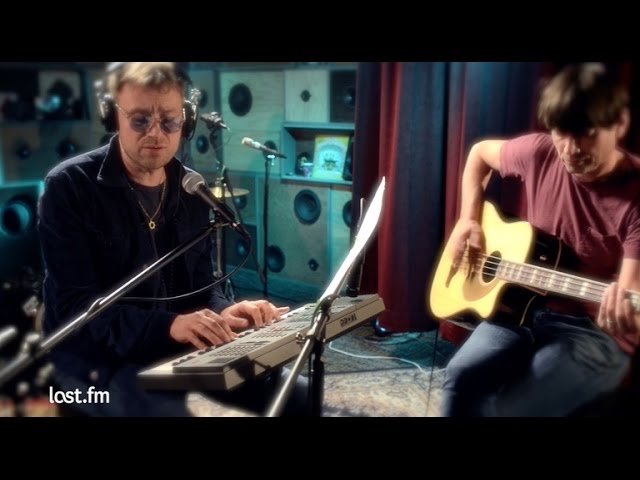 So Graham picked it up and finished it all off, which was great. I called him and asked if he wanted me to come and help and said “no, leave it to me” and then he called me back about a week later and said there was a couple of bits of bass that needed patching up. And, really, that was it. There was a couple of bass lines to patch up, but really ninety-percent of it was done in that really short and intense playing in Hong Kong.

Considering how much your life has now moved away from Blur, with running the farm etc, was there any reservation in putting out the new record and heading out on the road? As well, did you feel any sense of pressure with the release?

There doesn’t feel like any pressure that we have to do it. If people are up for it I think we’ll just come and play, ya know? [laughs] It’s a bloody lovely thing to do, playing music with who are basically my best mates. I’m not gonna get better friends than that in my life. It’s not like we’re doing an epic, two year tour to support this. It’s a very select number of shows. We want to enjoy it and enjoy each other’s company. So embarking on a steeplechase of endless cities, I don’t think we want to do that. Let’s just pick and chose the best places, where they like us the best, and have some fun.

With that tour including a visit back to Australia this July, how much of that decision was based on the cancellation of your scheduled 2014 Australian shows?

That was the biggest regret of my professional career, those shows not happening. So it was really important to us that we did come back to Australia. That [cancellation] was totally out of our control what happened there. And regrettable in the extreme. I’m serious, there’s nothing I regret more. It was a terrible shame. We were determined to come back to Australia.

You know, I’ve spent a bit of time in Australia outside of the band. I’ve made a couple of TV shows with [chef] Matt Stone. So, Stone is really excited that we’re coming back. The last time the band played Australia was ’97 I think, that’s nearly twenty years ago. And they were great shows, so, yeah, we’re well up for it.