In late September, Metallica gathered in New York to kickstart the promotional campaign for their 10th studio album, Hardwired… To Self-Destruct [out November 18th]. After an electrifying fanclub-only show at Webster Hall on Tuesday September 27th, we spoke with all four members – frontman James Hetfield, guitarist Kirk Hammett, drummer Lars Ulrich and bassist Robert Trujillo – at Electric Lady Studios the next day for this month’s cover story.

As in-depth as the feature is, there still wasn’t enough room to fit in everything we learned, so as an addition we offer 11 more nuggets of Metallica wisdom, as told by the band themselves.

Metallica is Lars Ulrich’s Man Cave
“Metallica is an awesome place to disappear into,” said the drummer at one point. “A lot of people [say], ‘Oh, it must be so much work to go on the road and it must be so much work…’ Fine, these two or three promo days in New York are a little ‘woah’, but going on tour with Metallica for two weeks, playing a few rock shows and having nice dinners and meeting fans and feeling all that love, that’s not fucking work, that’s rejuvenation.

“Metallica’s almost an escape for me. The real work stuff is the stuff at home. Put me on the Soundwave tour for two weeks in Australia and we’re sitting in Sydney for three days and going to the beach and hanging out in Brisbane, two days off in Perth, cool! Glass of wine and go and fucking play a rock show. Where do I sign up for that shit? My analogy is that it’s like the man cave now. It’s not so much work, trust me! That’s an insult to people who really work for a living.”

‘Lars Time’ is a Rare Commodity
“If you could see our calendar, it has a very funny look to it, cos we put most of our calendars together around the kids’ holidays,” explained the drummer. “So spring break in April, OK, we’ll shut down for two weeks and everyone will disappear with their kids to wherever they go. I like to go skiing in spring. I go to the American mountains and ski. There’s family time, there’s Metallica time, and occasionally, it does exist, there’s Lars time, and I’ll hide myself in a movie theatre and turn my phone off. But when you have three kids you actually realise that you should never turn your phone off in case somebody needs to get in touch with you. So it doesn’t amount to much in terms of Lars time, but occasionally I’ll steal a couple of hours.”

The Creative Process Still Gets Them High
“When you don’t do it too often you can get really high on the process itself,” said Ulrich. “What happens when you get high on the process is that you sometimes lose sight over whether anything’s good or not. You’re just like, ‘Fuck yeah! We’re playing and creating, we’re changing the world!’ [Laughs] And then a week later you go, what the fuck were we thinking? So you definitely get very high on the process, and you need people like Greg [Fidelman, producer] in there to go, ‘Hang on, boys, let’s just bring the excitement down a notch and start getting it good.’ You get so high on your ideas: ‘Woo! We connected this piece to that!’ So there’s a lot of that kind of stuff. But yeah, making a record and watching it form its own existence is fucking cool.”

Kirk Hammett Loves Aussie Pies
“I love Australia, man, whenever we go down there Rob and I are so giddy cos we know we’re gonna surf it end to end,” enthused the guitarist. “I love just the shape of Australia. The terra firma of Australia, how it looks. The fauna, the flora, and I really think that Australian people are so friendly and so warm, and will go that much farther to help you out if you need help. And super reliable too. And it’s a very consistent thing with Australians, so I kind of have a very special place in my heart for Australia. And I love that you can eat meat pies everywhere. Though I don’t eat beef, I love those chicken pies.”

Their First Ever Australian Tour in 1989 Was a Blast
“I remember we did all the tourist stuff,” said Hammett. “We went to see the Opera House, rode the ferry around the bay, saw the Governor’s mansion which [AC/DC guitarist] Malcolm Young bought. I went horseback riding in the outback to see kangaroos. At one point I chased a kangaroo on horseback, which was the most fun thing. Went out to the zoo, saw the koala bears all stoned on eucalyptus. Fantastic.”

Figuring out the Bass Parts on …And Justice For All Wasn’t Easy
1988’s …And Justice For All is remarkable for many things, not least the fact you can’t hear the bass. Which made life hard for Robert Trujillo when he joined the band and had to learn the songs. “Justice is the biggest challenge cos it’s also complex in the arrangements,” he said. “So as a bass player, it’s kind of open territory, and you cater to the riff, but then you listen to the live stuff, see what Jason [Newsted] was doing. ‘Frayed Ends Of Sanity’ off the Justice album is a song that I really wanted to play with the band, and for years and years I was always like, ‘Let’s play this song!’ But I’ll tell you something, I started working on that song almost from the very first time I joined the band. I knew some day we would play that song, and I knew that if I didn’t do my homework that when that day came I would have a hard time learning it the week before. So I nurtured that song for years, and we played it for the first time last summer, five times, and it was a dream come true for me.

“By the way, the tablature books too were very helpful when I first joined the band. Anything I could do. I wasn’t getting the master tapes back then. It’s a different time now. Nowadays you can go online and you can get the masters for just about any band out there, but back in the day you didn’t have that option. Kirk uses the tab books sometimes: ‘Let me get the tab books I’ve gotta learn my solo from “Dyer’s Eve” again!'”

Rob Trujillo is Lars’ Karaoke Buddy
“We all have our relationships with each other in certain ways,” said Trujillo of his friendship with the rest of the band. “I’m this neutral body who can go out and have drinks with Lars sometimes, like he called me the other night, on Saturday, it was two in the morning and said, ‘Karaoke?’ I said, ‘Karaoke? It’s two in the morning! [Laughs] Next time karaoke me at 10 o’clock at night!’ But that’s how we roll. And then I can go for a great surf session in South Africa with Kirk or in Costa Rica and we could just have this great day together where we’re surfing and having dinner with our surfer friends. And then with James we go to concerts together when we’re back home. We had dinner last night, just us, after the gig. So our relationships with each other vary, but they’re special and they’re unique.” 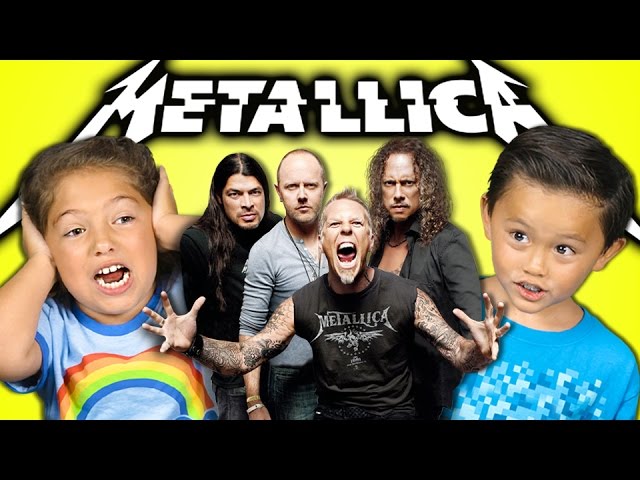 James Hetfield Loves Kids’ Honesty
“Kids have no filters, they tell it like it is,” said the frontman. “Maybe you’ve seen it, there’s a YouTube thing with kids listening to Metallica for the first time, you’ve gotta check it out, it’s beautiful! The honesty is like, ‘When does it stop!’ ‘God, they look like they’re 80!’ [Roars with laughter] The truth is so beautiful.”

He Also Likes Watching You Watch Him
At the Webster Hall show on September 27th, something dawned on the frontman: “I realised that people like watching us, but I like watching them. There’s so many weirdos out there, it is awesome. Everyone enjoys the show a different way, has a blast, the way they take in music, the way they celebrate it, the way it makes them move or do whatever they need to do. It’s great.”

Producer Greg Fidelman is the Man in the Middle
“He’s a great, independent, autonomous voice,” said Ulrich. “The last record with Rick [Rubin] at the helm [2008’s Death Magnetic] was probably more of a group record, but this record was probably more a James and Lars record. And what he does is, he’s a really good middle guy between James and I. Not that there were particular issues, but I say left and James says right, and Fidelman will give his own independent autonomous thoughts on that, and both James and I trust him enough to go, whatever he says, because there has to be trust in these situations. So as long as there’s trust, then it’s cool, so we trust him.”

Lars has a Killer Sense of Humour
In the informal meet & greet at Electric Lady the day before our interviews, Lars quipped that as Rolling Stone Australia had flown the furthest out of all the journalists present, we won a prize of a toaster. It became a running joke over the next 24 hours, and then we thought no more of it. A week after arriving back in Australia, look what turned up: a Metallica toaster.