Joan Rivers made her television debut more than 50 years ago – on The Tonight Show in the early 1960s – and remained a small-screen mainstay right up until her death on September 4th at age 81. Over the course of her career she experienced highs, lows (including being blacklisted by Johnny Carson) and numerous resurrections – every time life knocked her down, she’d get right back up, dust herself off and crack a dirty joke. A master of both self-deprecation and reinvention, Rivers seemingly became more popular the older she got, and from winning Celebrity Apprentice to bad-mouthing stars on Fashion Police to hooking up with Louis C.K., the comedian never lost her edge. 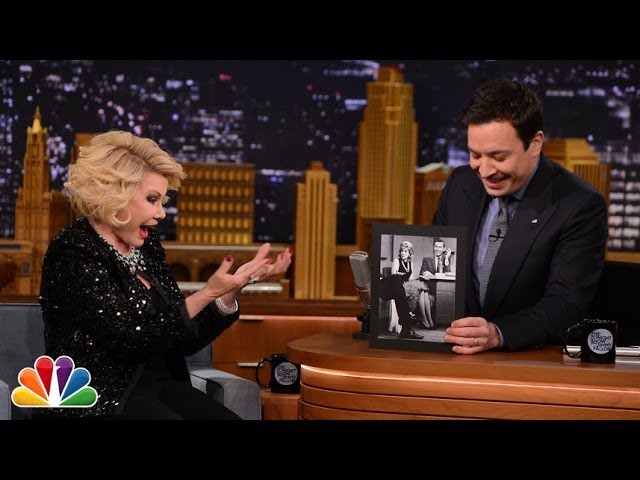 The Tonight Show With Jimmy Fallon (2014)
After a 30-year ban, Fallon extended a Tonight Show olive branch in March 2014 by inviting Rivers back to the couch. It would be her final appearance – and she was just as punchy as ever: dropping Holocaust jokes before claiming she got her privates pierced to commemorate the occasion. “It’s very special for me to be back,” she sincerely said, before ending the interview on a chilling note when Fallon asked, “You’re not afraid of death, are you?” In true form, her answer made the audience laugh. 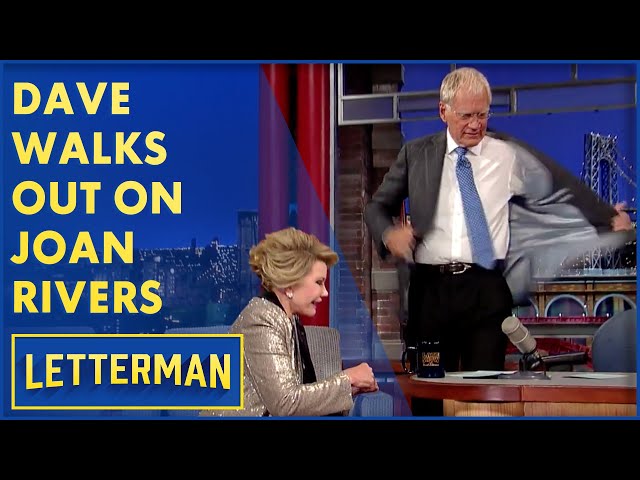 Late Show With David Letterman (2014)
Soon after Rivers’ CNN storm-off, the comedian visited The Late Show With David Letterman, where she again denied the situation was a stunt ­– calling the CNN interviewer “very judgmental.” In jest, Letterman walked off the set of his own show, leaving Rivers to interview herself. Letterman’s off-screen march came after Rivers did a bit about Depends undergarments and “taking a dump.” She then went on to crack jokes about her private parts while she waited for Letterman to return.

CNN Live (2014)
While promoting her book Diary of a Mad Diva in July 2014, Rivers went on the offensive during a CNN interview after repeatedly being put on the “defensive” about her “mean” sense of humor and the fact that PETA had recently confronted her about wearing fur. Finally, she stormed off the live telecast, leaving the anchor to wonder whether she was bluffing. The offending interviewer, Fredericka Whitfield, quickly got her answer, saying, “Off camera, [Rivers] kept her microphone on as she continued to talk and dropped some rather unflattering four-letter words.” Still, the question arose as to whether Rivers pulled the stunt for publicity, but the comedian denied the accusation.

Louie (2011)
Guest-starring as herself in an episode simply called “Joan,” the iconic comedian appeared on season two of Louis, and gave the show’s star a pep talk about his career – and a roll in the hay. After a heartfelt speech where she says that being a comedian is “a calling – we make people happy,” Louis C.K. lunges at her, to which she screams, “I’m old enough to be your grandmother!” before giving in – and giving him a list of no-nos.

Joan and Melissa: Joan Knows Best? (2011)
Joan and Melissa’s Celebrity Apprentice tirade led to the reality show Joan & Melissa: Joan Knows Best?, which ran for four seasons. Over-the-top antics included Joan trying to take nude pictures of Melissa in the shower to give to Girls Gone Wild creator Joe Francis and Joan compiling a “Fuck It” list instead of a bucket list for her 80th birthday, which included twerking, smoking marijuana and making a sex tape. (Said tape was a fake, jokingly made with Kim Kardashian’s ex Ray J, that swirled around the Internet.)

Celebrity Apprentice (2009)
In yet another career resurgence, Rivers catapulted herself back into the mainstream by appearing on Donald Trump’s Celebrity Apprentice alongside daughter Melissa. The two made headlines with an epic meltdown when Melissa was fired while “white trash” poker-player rival Annie Duke stayed and Joan stormed off the set, comparing the situation to Nazi Germany amidst a series of bleeped expletives. Rivers would eventually return and go on to win the competition over Duke – introducing her to a whole new set of fans in the process. 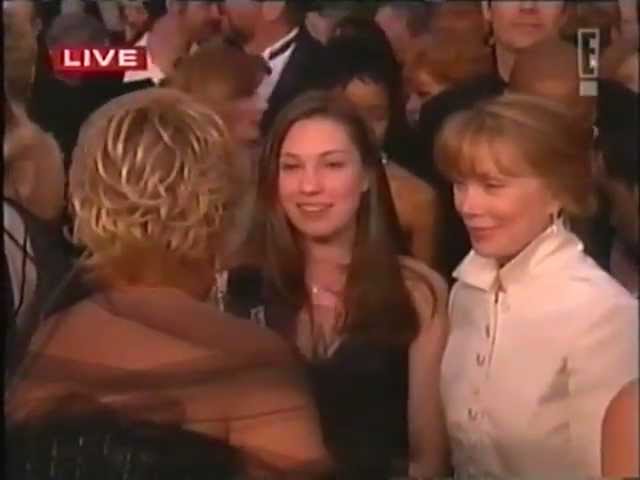 Live on the Red Carpet (2002)
Ten years after the Late Show fiasco, Rivers reinvented herself as a biting commentator on the red carpet of major awards shows. From 1996-2014, she and daughter Melissa peppered celebrities with quick-witted questions before such telecasts as the Academy Awards, Primetime Emmys, Golden Globes and Grammys. In 2002, she hounded the likes of Sharon Stone, Nicole Kidman and Sandra Bullock with questions like, “Did they go through your bag at security?”

The Late Show, Starring Joan Rivers (1986)
In 1986, Rivers launched a late-night talk show that was rife with controversy – and tragedy – and which would change the trajectory of her career. The Late Show With Joan Rivers only aired for two seasons, but it caused an irreparable rift between her and Carson when she became his rival – and he subsequently banned her from his show. Supposedly she and Carson never spoke again. (He died in 2005, but the ban would span almost 30 years because both Jay Leno and Conan O’Brien upheld it.) Rivers also blamed the show for the death of producer-husband Edgar Rosenberg, who she claimed committed suicide in 1987 over the “embarrassment” of the pair being fired from the show. The Late Show would go on without them, featuring Arsenio Hall and, later, Ross Shafer. One of the show’s highlights, though, included Rivers going tête-à-tête with fellow comic icon Lucille Ball.

The Tonight Show With Johnny Carson (1982)
By the early 1980s, Rivers was a regular guest host of The Tonight Show, which was officially helmed by Carson from 1962 to 1992. During this time, she took her biting wit to new and controversial heights, becoming an increasingly polarizing figure and cementing her “Can we talk?” catchphrase. She brought a very different vibe than Carson, by talking about her friend Heidi Abromowitz – a “tramp” who was the “poster girl for herpes” – and her post-menopausal sex life: “I have no bazooms. You know what it’s like to stand in front of your husband naked and say, ‘What does this remind you of?’ And he says, ‘Pancakes for breakfast.'”

The Ed Sullivan Show (1967)
After being taken under Carson’s wing, Rivers quickly made a name for herself on the late-night talk show circuit with her acerbic humor – often at the expense of herself (and, later, others). In 1967, she stormed the stage of the iconic Ed Sullivan Show with sharp material about what it was like to be a single, unmarried woman at the time: “A girl has to be pretty, intelligent and a good sport: ‘Howard Johnson’s again, hooray, hooray!'”

The Sammy Davis Show (1966)
Joan Rivers got her start doing standup in New York comedy clubs, but her big break came on The Tonight Show, and she often referred to long-time host Johnny Carson as her mentor. Indeed, he sang her praises when he hosted the short-lived Sammy Davis Jr. Show in 1966 before they bantered like old friends about marriage, house parties and Jell-O. It’s one of the very first videos of the two riffing off each other.