When the veteran luthier Sherwood Phifer goes out to hear live music, he hears elements of the guitar that the vast majority of even the most serious audiophiles could never pick up on. An amateur guitarist himself, Phifer has been building high-end customized instruments for roughly 45 years, so when he listens, he’s not hearing a performance merely as a fan or a fellow musician but also as one of the most respected luthiers in the country.

“Sometimes I hear a really phenomenal guitar player, but at the same time I can hear, ‘Oh, he’s fretting out, he needs a fret job,’” says Phifer. “What jumps out at me is tonality: note presence, note duration, sustain…Often, I can say, ‘He’s got great chops, but the instrument is not speaking well enough for him.’”

Phifer, who goes by the name Woody, has been making instruments that speak for some of the most highly accomplished musicians in rock and jazz for nearly a half-century. He has built guitars and basses for rock luminaries like Gene Simmons, Paul Stanley, Rick Derringer, Todd Rundgren, and Johnny and Edgar Winter; jazz legends like George Benson and Ronny Jordan; and session pros like Will Lee and David Spinozza. At the moment, he’s in the process of developing guitars for more contemporary artists like Yasiin Bey and Wyclef Jean.

“They’re like jewels,” says Benson, a longtime friend who has played Phifer’s guitars throughout his career. “They’re very special, and they’re not ordinary guitars. When you play a Woody guitar or see one, you can see the special efforts he puts into the instruments…They are special instruments that I think will be valuable years from now, because they are so unique.”

Phifer has worked for himself since the Seventies, building his entire business on word of mouth without any degree of support from large guitar manufacturers like Gibson or Fender. He’ll spend months working on a single guitar at a time at his upstate New York workshop, and it’ll sometimes take him years to perfect a new Phifer Guitars model, which often ends up quite different from the cheaper, mass-produced alternatives.

“People look at [my] instruments and the first thing they say is, ‘Oh, that doesn’t look like what I’m accustomed to.’ I say, ‘Try it,’” says Phifer. “I take the best I can gather from conversations with a variety of rock and jazz players, and I turn it into something that doesn’t resemble what you’re accustomed to seeing…Most of my stuff involves a departure from the norm.”

Phifer became interested in guitar craftsmanship at a young age as a child. By the time he was four years old, he was building toys, and when he first came across a guitar later in his childhood, he became fascinated with the instrument. “I just wanted to know, ‘How does it work?’” he says. “And then the next question was, ‘How can I make one?’”

In his teenage years, Phifer built his own replica Telecaster modeled after a guitar his friend had lent him. “Unbeknownst to him, I took the Telecaster apart and gave it back to him. A couple of months later I had my own Telecaster.”

Eventually, Phifer dropped out of college to begin working at Guitar Lab, a Manhattan institution that built and serviced guitars for many of the city’s professional musicians. The store also served as a depot for touring musicians stopping through town. After the store built guitars for Kiss’ Stanley and Simmons, the band would often stop in after a tour had ended with an unusual request: “Gene Simmons would spit fake blood and it would be on everything, so it’d be ‘Clean up these instruments before we go back out [on tour],” recalls Phifer.

After a brief stint in California where he studied with the legendary late luthier Dan Armstrong (Keith Richards, Lou Reed), by 1975 Phifer had left Guitar Lab to start his own business, which he’s run ever since. 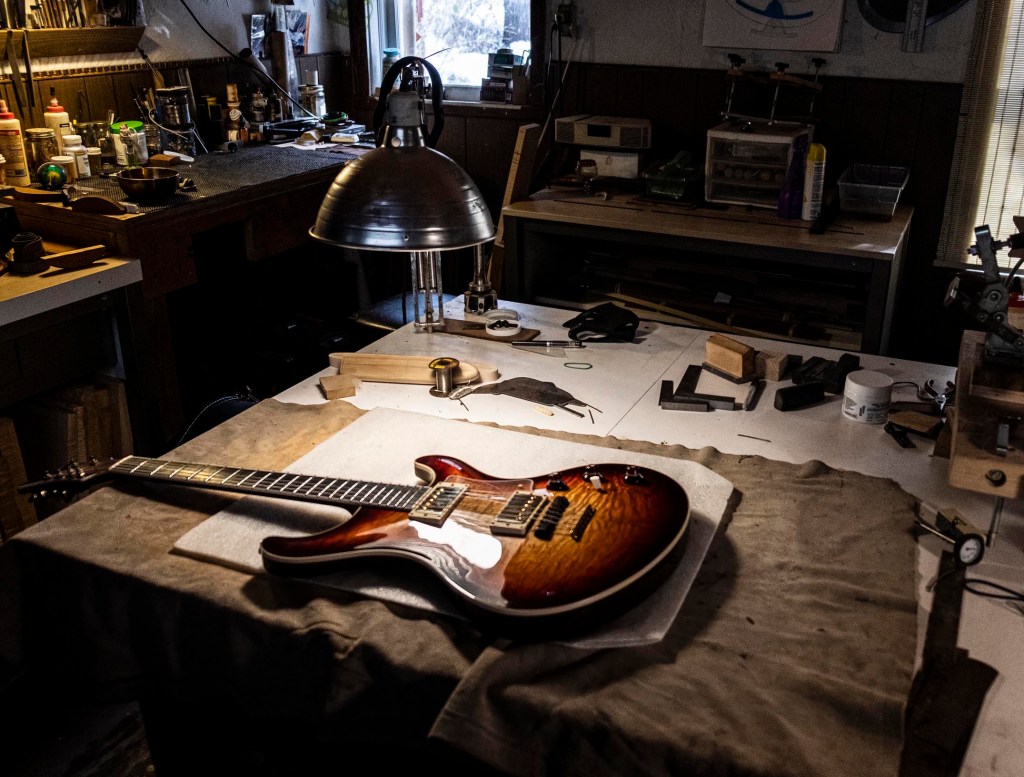 In the early days of his own guitar-building enterprise, he used the knowledge he’d gained at Guitar Lab from working with the city’s daily commercial guitarists, musicians who played in daily sessions for advertising jingles and needed to hold a guitar for six hours a day.

“[These guys] could really sit with an instrument and really pick it apart and give you real useful information, so I started changing my actual idea of what the end result was supposed to be,” says Phifer. “I started paying more attention: to the tonal qualities of an instrument, the playability of an instrument, and that became more or less the hallmark of what my instruments are.”

Over the past 20 years, Phifer has become somewhat singularly focused on developing the perfect acoustic archtop guitar, a distinct hollow-body acoustic instrument particularly popular with jazz musicians. In the early 2000s, his old friend George Benson introduced him to the jazz virtuoso Ronny Jordan after a show.

“Wow, I’ve never seen an archtop like that,” Jordan told Phifer. Jordan then ended up recording touring with Phifer’s archtop, and recorded the entirety of his 2003 album At Last using the instrument.

But despite earning the trust and respect of some of the most accomplished guitarists in all of jazz and rock music, Phifer has never been able to expand his business or offer his inventive guitars to a mass consumer audience, much to his disappointment. As one of the very few black luthiers working in the industry (Phifer is aware of just one other colleague, in California, whom he’s never met), the master builder of guitars has been consistently denied opportunities to turn his one-man shop into a larger production company. He once brought his models to a meeting with Yamaha, but nothing came of the meeting. He’s been repeatedly denied bank loans to expand his business.

“I once called a bank and spoke to a bank officer, and he was excited,” Phifer says. “I told him I had fully equipped my shop, and what I needed was operating money to buy more materials and launch a product line. He thought it was a great idea, so he came over to my shop. When he knocked on the door, he was very excited: ‘I’m here to see Mr. Phifer.’ My last name is either German or Jewish. When I stuck out my hand and said, ‘I am Mr. Phifer,’ everything changed. He was in my shop for two minutes. He didn’t get too far from the front door, and he said, ‘Well, we can’t help you.’ That was the end of that conversation.’”

Reflecting on the incident from several decades ago, the craftsman adds: “Unfortunately, that’s part of the duality of access to funding for a lot of things in this country.”

Despite being refused the type of industry-wide support that he’s sought, Phifer, at age 70, remains undeterred and more dedicated than he’s ever been to the art of developing the flawless guitar.

“It’s still ongoing,” he says. “Any of us that are making instruments at this point, we’re still trying to make the better mousetrap.”

George Benson isn’t surprised. “[Woody] has a love for the instrument,” says the guitarist, “and he knows that when he shows the instrument to people, he’s going to blow their minds.”