Rhian Teasdale and Hester Chambers don’t take themselves too seriously — even the name of their band, Wet Leg, was born out of combining random emojis together on a keyboard. “It’s a really good way to find band names,” confirms Chambers, 27.

Teasdale and Chambers are sitting in the Ace Hotel in Brooklyn in early December, fresh from a goofy session inside the lobby’s photo booth. It’s the British duo’s first time in New York, and so far the experience has exceeded their expectations of a place they’ve only seen on Sex in the City. “We just want to do a big stomp around,” says Teasdale, 28. “Pretend like we’re in the movies.”

They’re shocked by many aspects of the city, from the astronomical breakfast portions at a diner (Teasdale: “It was so intense”) to SantaCon, the annual yuletide mayhem convention dreaded by city dwellers (Chambers: “I want to see that in action!”). But more than anything, they’re still trying to process their sudden success. When we meet, they’re talking through their recent American TV debut on Late Night With Seth Meyers. “It feels like it’s not me,” Teasdale says. “Especially since my hair looks so nice.”

This is the sardonic, English charm of Wet Leg — a band who’s captured the attention of everyone from Iggy Pop to Dave Grohl to Michael Gandolfini. With singles like “Chaise Longue” and “Wet Dream” that drip in post-punk riffs and witty, sexual innuendos, they’ve gone from unknowns to highly anticipated debut artists in a matter of weeks. And they’re just as surprised as you are.

At the mere mention of the band getting signed to Domino in November 2020, they perform what could easily be a bit, but is really just the way they communicate with each other. “Because there were no gigs, we couldn’t showcase ourselves, which is very strange,” Chambers says. “I was always worried — like, oh my god, when they see that I can’t actually play guitar, they’re going to be like, ‘Excuse me. We need to …’”

“…’Take back the contracts,’” Teasdale chimes in, pretending to rip up a piece of paper. They break out in laughter, with Chambers’ fingers — most of them decorated with rings — fiddling with her braids.

At a recent show at Baby’s All Right in Brooklyn, fans screamed along to every word of “Chaise Longue,” which the duo wrote back home over Christmas break in 2019. Chambers was cooking dinner and Teasdale was eating cookies while they free-styled, packing in Mean Girls references (“Would you like us to assign someone to butter your muffin?”) and a call-and-response of “Excuse me” and “What?”

The video for “Chaise Longue” — which features Teasdale and Chambers in long, white peasant dresses and straw hats — has more than three million views on YouTube. “We weren’t making a conscious effort to write anything,” Teasdale says. “It came out of that 13-year-old girl sleepover head space.”

That’s the head space that’s brought Wet Leg this far — as well as their cool, nonchalant attitude about it all. “It takes a lot of effort to look this carefree and chill,” Teasdale says with a smile, a line as sarcastic as one of their songs.

Growing up on the Isle of Wight, Teasdale and Chambers spent their youths attending festivals and hanging out with friends on the beach. “We’re packed into this really small island,” Teasdale says. “Lots of barbecues, lots of camping with your friends, lots of teenage drinking.”

Chambers grew up in a musical household, learning to play the piano at a young age while her mother passed on her taste in music: the Moody Blues, the Velvet Underground, Nick Drake, Aretha Franklin, and plenty of David Bowie.

Teasdale and Chambers have three siblings each, and Teasdale credits hers with her musical knowledge. “I was able to access their iTunes when iTunes was a thing,” she says. “Through stealing my sister’s music, I discovered Björk, Radiohead, Joanna Newsom, and Devendra Banhart.”

Teasdale and Chambers met at the Isle of Wight College, where both were studying the music industry in preparation for their BTEC, an extended diploma in the performing arts. “We didn’t really hang out tons when we first met,” Chambers says, turning to face Teasdale. “You were quite intimidating because you were very cool, and I was big-time in my shell.”

It’s safe to say that both members of Wet Leg are pretty cool, which they did not set out to be when they formed. “When we started Wet Leg, there was a definite, solid decision that it wasn’t going to be a serious band,” Teasdale says, noting she didn’t even know how to play guitar when they began. “The aim of the game was just to have fun. It doesn’t matter if people are judging us. We’re just going to do it, because why the hell not? It took us so long to get to that point.”

“It was scary for sure,” adds Chambers. “Being in [our] mid-twenties and getting older, you’re like, ‘Will people laugh at me? Is this allowed?’ But actually, it is, and you just have to do it.”

The band’s self-titled debut, out April 8, also features the single “Wet Dream,” a cheeky pop stunner where the dreamer in question gets called out with provocative directness: “What makes you think you’re good enough/To think about me when you’re touching yourself?”

Teasdale says “Wet Dream” came together just as spontaneously as “Chaise Longue,” including the line about a movie she saw when she was 14: “You said, ‘Baby, do you want to come home with me?/I’ve got Buffalo ’66 on DVD.’” “I think I just wanted to get ‘DVD’ into a song, because it’s so funny that no one watches them anymore,” she says.

There are plenty of unreleased gems on Wet Leg, too, from the triumphant opener, “Being in Love,” to “Supermarket,” inspired by a friend’s drug dealer during the pandemic (the chorus: “We got too highhhhhhh“).

“It was obviously a dry spell, because no one’s going to parties or anything,” Teasdale says. “They’d send really charming texts around with all the special offers: ‘Fabulous Fridays! Buy one, get one free!’”

Several songs didn’t make it onto the 12-track album, like, “I Want to Be Abducted (By a UFO).” “We’re thinking about bringing it back, resurrecting it,” Chambers says. (The punctuation in the title is a point of contention: “Maybe brackets, because otherwise it could have quite dark connotations,” Teasdale adds.) 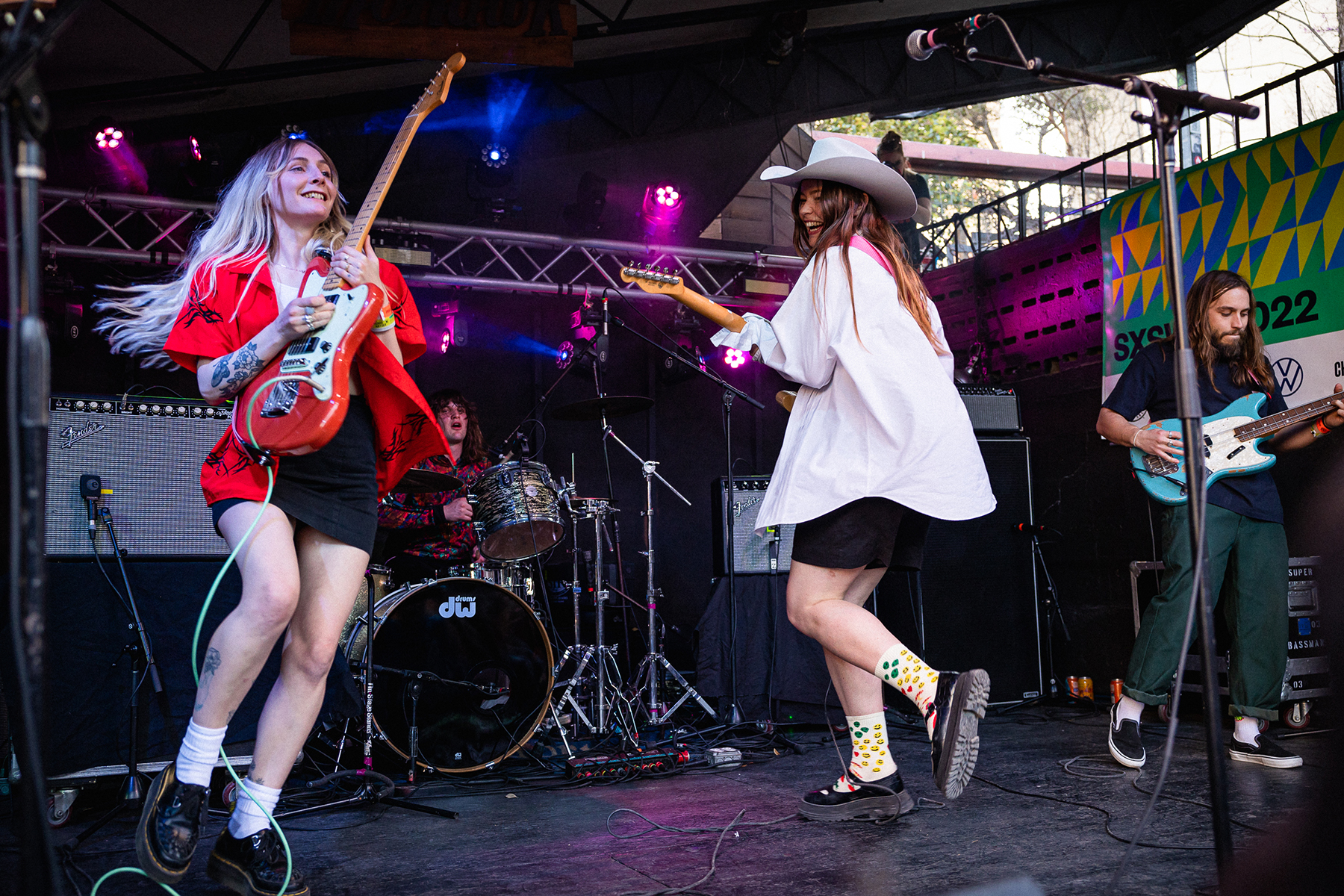 Wet Leg performs at the Mohawk in Austin during SXSW in March 2022. (Photo: Griffin Lotz for Rolling Stone)

At South by Southwest this month, Wet Leg were by far the buzziest band to catch — the subject of long lines outside venues and frantic posts on social media throughout the week. The duo themselves had a relatively chill time in Texas. “Fave people I saw were Sasami and Self Esteem,” Teasdale writes in an email afterward. “I think we all kept forgetting to eat a bit, but we made a good few visits to Torchy’s Tacos.”

Wet Leg’s ever-growing fanbase required them to upgrade their venues on their first full North American tour. Instead of playing New York’s 650-capacity Music Hall of Williamsburg, they recently performed a sold-out show to a crowd nearly triple that size at Brooklyn Steel, and this week they’ll hit the Fonda Theatre in Los Angeles.

Teasdale takes it all in the same loose, lighthearted stride that got us listening to Wet Leg in the first place. “The upgrades have been like putting on shoes that are too big for you and learning how to hobble about in them,” she says, “and hope that no one notices you’re walking funny.”