Every few months, RollingStoneaus.com will shine a spotlight on a forgotten, neglected, overshadowed, underappreciated and/or critically maligned film that we love in a new series we’re calling “Be Kind, Rewind.” Our latest movie: John Carpenter’s They Live.

Spend enough time (a life-ruining amount) writing and thinking about movies, and you begin to obsess about things that are only tangentially related to what’s in front of you. It’s the groupie-ish side to being a film critic. We all do it, even if our rock stars are intense directors who can barely function in public. From my teenage years on, I lavished a ridiculous amount of energy pondering the question: What would it like to be John Carpenter? Not to make his movies — to be him.

Even in his Eighties heyday, Carpenter always came across as bored in interviews, a rascally chain-smoking Kentuckian who’d rather be watching college basketball. If you were JC, you’d probably grow tired of yet another question about Halloween, the slasher-flick classic you made when you were 30 and that redefined a genre you only partly gave a shit about. You might go home and putz around in your synthesizer room, coming up with spiky music for futuristic thrillers. For several years, Adrienne Barbeau would be there to greet you. And then, after hundreds of phone calls with Kurt Russell, after getting the opportunity to remake your favorite movie and improve upon it (The Thing), after watching your passion projects tank at the box office, you’d hit a brick wall. 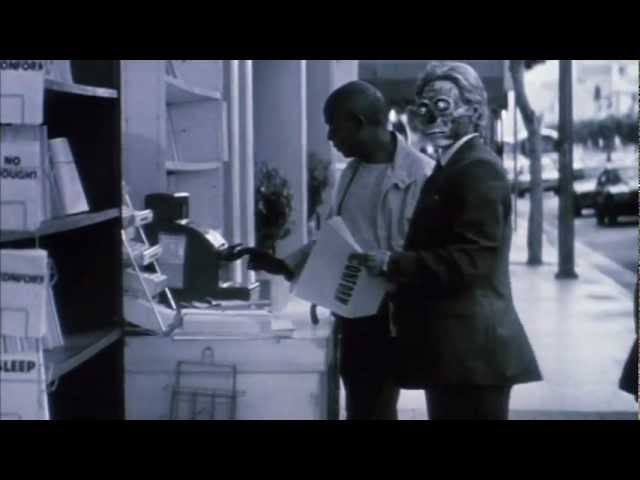 They Live, Carpenter’s 1988 paranoid freakout, deserves to be thought of as a masterpiece, an artist’s defiant last grab at substance before losing the thread. It’s a cheesy but lovable movie about a working-class hero (WWF wrestler “Rowdy” Roddy Piper), struggling to find work in a harshly class-riven Los Angeles. He discovers, after slipping on a pair of special sunglasses, that the city’s abundant population of yuppies are aliens. It’s that simple: Yuppies are aliens. In interviews, Carpenter often goes further than his screenplay (based in part on Ray Nelson’s short story “Eight O’Clock in the Morning,” which became a 1986 graphic novel), flatly calling the secret ghouls Republicans. They Live portrays these goo-faced interlopers, as viewed via the black-and-white sunglasses-cam, in three-piece suits, being pushy and uncaring, blithely telling their coworkers to “Go for it.” And when they’re finally seen for what they are, by this nothing of a denim-clad construction worker (Piper’s character is named Nada), they panic.

Plenty of films since Carpenter’s have come down hard on Reaganomics; it’s almost too limiting of They Live’s stealth power to call it a political screed. Far more adventurously, this is a thriller — a mass-consumable entertainment — that tries to reprogram its audience into anti-consumers. Everything we watch in a theater asks us, to some degree, to see the world as it does. But They Live literalises that idea, forcing the shades on us to display a wholly different perspective. The first time Nada gets hip to the secret world order, he’s walking down a city street on a typically hazy L.A. morning. He slips on the glasses — and what we see over the next several minutes is something no other movie has attempted as plainly. Billboards become bold-text messages. A bikini-clad woman is replaced by “MARRY AND REPRODUCE.” Magazine racks exhort us to “CONSUME” and “OBEY.” A wad of bills in a vendor’s hand says “THIS IS YOUR GOD.”

Nothing can prepare you for this sequence, a near-wordless piece of sociocultural smackdown smuggled into a sci-fi flick. Brooklyn author Jonathan Lethem, a huge They Live fan, has called it “10 minutes of cognitive dissonance as sublime as anything in the history of paranoid cinema.” The moment has been rhapsodised by Slovenian philosopher Slavoj Zizek and appropriated by culture-jamming artist Shepard Fairey for his iconic Andre the Giant posters. Carpenter’s target was advertising but also a slick television-dictated lifestyle, putting his movie in the prickly company of media satires like Network (this is very much the training-wheels version). Mainly, though, the scene makes you gasp: Are we really going there? Even now, it’s easy to laugh at the idea of bros lining up for the next Big Trouble in Little China, instead being served up a heaping helping of media semiotics.

They Live was a bridge for some of us, a bona-fide act of subversion from a filmmaker who invested his famous style of clean widescreen compositions and Hawksian gab with something larger, something flattering to the audience’s intelligence. You feel alarm and desperation emanating from the film: the passion of a director lunging for significance, maybe because he saw his crazy run of a career butting up against Hollywood indifference. It’s a sad movie, a Lorax-like cry.

This will not be the moment to make claims for the acting stylings of Roddy Piper, who bounded up to Carpenter’s skybox at WrestleMania 3 and landed the part. But let’s say this about him: He often played the villain and he often got trounced. Some of that beaten-down persona makes its way into Nada, himself having head west after fleeing a dried-up job market in Denver. “I believe in America,” the character says as he gazes into a pink twilight, alluding to a far-better movie yet still effectively milking that statement’s naïveté. (They Live makes pointed use of Los Angeles’s economic disparities: Those are real East L.A. homeless Carpenter paid a day’s wages to, the glistening downtown towers visible behind their shantytown.)

Piper does fine by the rebellion action the movie eventually reduces itself to, a final frenzy against the alien-yuppies and their “human power elite.” (He even has his own Schwarzeneggerian catchphrase, improvised on the day: “I have come here to chew bubblegum and kick ass…and I’m all out of bubblegum.”) But he does magnificently with the film most infamous scene, a six-minute slugfest with costar Keith David that’s just stupefying in its duration. Nada only wants the guy to put on the shades and join the crusade — amazingly, this is a serious sticking point, one that leads to body blows and pile-drivers. The scene goes on and on. Carpenter has called it an homage to John Ford’s The Quiet Man, a touch too foxy as references go. More honestly, it’s a concession to Piper’s fans. 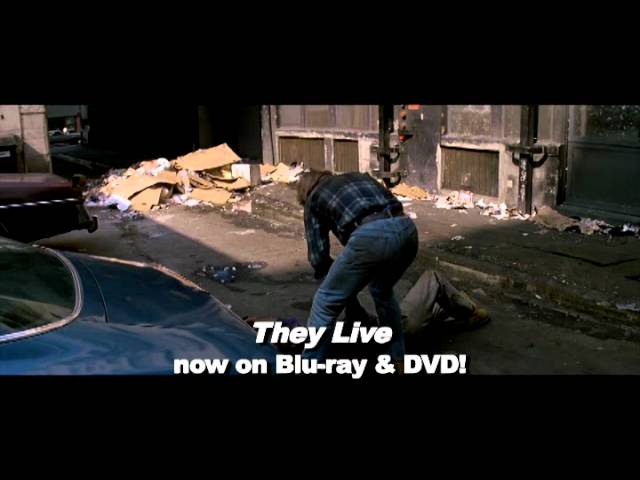 Yet isn’t there something depressing about the brawl as well, an utter waste of energy that could be better spent against the Republicans? It would be great to believe Carpenter thought about that. It would also be wonderful to think that he shifted his signature musical palette away from his tingling sequencers and toward They Live’s plodding downtrodden blues because the director was, in a way, playing the blues — his lament for the American dream, couched in a plastic, commercial idiom. When I saw They Live at age 17, I finally knew what it was like to be John Carpenter. And it was miserable.