Back in 2012, Image Comics published the 100th issue of The Walking Dead, and creator Robert Kirkman celebrated the milestone by doing what he does best: killing a major character. That particular chapter introduced Negan, a bat-wielding bully with an army of lackeys and a mile-wide mean streak. To prove his mettle, this thug ordered the hero Rick Grimes and a handful of his friends to kneel before him. He then pointed his weapon up and down the line, gave a little “eeny meeny miny moe” chant, and … .

Well, we’d better not say what happens next, or else fans of the television series might club us repeatedly upside the head. The comic books may be up to issue no. 160 now, but TV’s TWD is just now getting around to adapting that fateful episode; and we’ve been sweating all summer over who exactly got bludgeoned. Will it be the same man or woman who died on the page? Or will the show’s writers do as they’ve so often done, and take a different path?

While we wait for the answer to that question, here’s another: Who the hell is Negan? What is it about this foul-mouthed, cool-headed tough guy that’s had comics fans anxious to see him on the small screen for four years now? There are no spoilers below for non-readers, but here’s some basic info about what’s made a Walking Dead villain into a franchise favourite.

He’s the main antagonist in the comics
It’s strange to say that someone who didn’t show up in the comic books for nearly a decade is the series’ official Big Bad, but until Negan and his gang arrived, The Walking Dead had a habit of burning through foes. The most memorable nemesis from the early years of both the comics and the TV show was the Governor: a petty dictator ruling a fortified small town. This was toward the start of the post-apocalyptic epic, when food, medicine, and weapons were more plentiful, and a megalomaniac could rise to power just through hoarding. Negan has become the boss of a much sparser landscape, and has done it by ordering his followers, “The Saviors,” to grab whatever he needs from other communities … like, for example, Rick’s.

Negan’s not a crackpot like the Governor, though. His “take or be taken” philosophy is coldly logical, and often explained by him in a relaxed, brotherly tone – provided that you had the kind of brothers who’d beat you up every day and say it was for your own good. As played by Jeffrey Dean Morgan on TV, the character has a certain panache: This is a man who’s figured out a system of survival, and he’s executing it to perfection. In an interview with IGN, showrunner Scott M. Gimple said that what’s interesting about Negan is that his understanding of how the world works isn’t that different from Rick’s, aside from the total lack of mercy or compassion. “Things are getting grayer and grayer and grayer,” according to Gimple. “It’s not a vast gulf between those two.”

He inspires loyalty (for the most part)
Talking to Entertainment Weekly, Kirkman explained, “This is a very nuanced character that has a lot of different shades to him. There’s a lot of honour to him, a rule system in place. … He’s a leader of a fairly sizeable group, and so in order to do those things for as long as he’s done them, he’d have to be very accomplished as a human being.” In other words, while Negan intimidates the residents of the Alexandria Safe Zone, the Hilltop Colony and every other pocket of survivors that have sprung up in his general vicinity, his own Saviors are true-believers. They’re dedicated to a Darwinian existence – so long as they’re on top of the food chain, that is.

Last season on The Walking Dead, we got to see a little of these disciples’ devotion to their murdering philosopher-king. Whenever Rick and the Alexandrians have come across their enemies outside their respective walls, the Saviors have sneered at our heroes, calling them weak and sentimental. The major exception is Dwight, a Negan lieutenant who was introduced last year as he was trying to go AWOL. He’s since re-entered the fold, but his recent past suggests that maybe – maybe – Rick’s crew will one day be able break their rivals’ seemingly unified front. 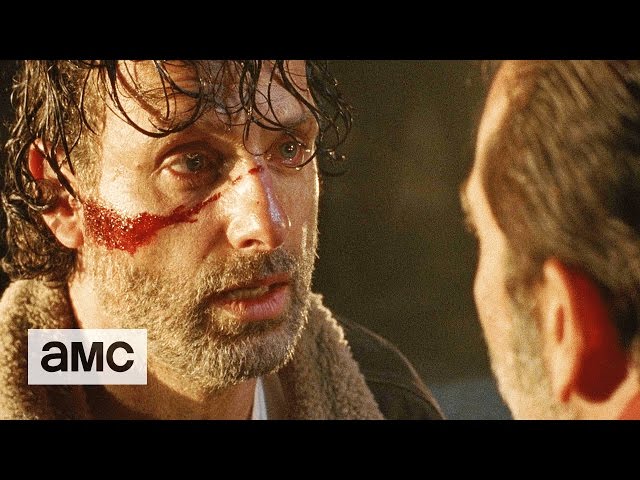 He has a very special weapon
Walking Dead viewers have already met “Lucille,” the barbed-wire-covered baseball bat that Negan carries as his signature people-killer. Why the name? That’s a secret that comics readers know and that the TV-only crowd will eventually learn. What matters for now is how terrifyingly deadly that slugger looks, and how scary/cool Morgan is wielding it. Kirkman has described getting “goosebumps” seeing Lucille for the first time; and Morgan has said that just carrying the spiky club gets him right into character.

He swears like a … well, like a Negan
The restrictions of U.S network AMC’s standards and practices won’t allow Morgan to use the kind of language that Negan uses in the comics, where he peppers his conversations liberally with spicy profanity. For that, fans will have to wait until his episodes hit home video. The producers are shooting some key scenes twice – once with the mild vulgarity their home channel allows, and once with several payloads’ worth of f-bombs – and will be making the rawer versions available later.

With or without the swears though, viewers will be able to enjoy Negan’s thoughtful, articulate, almost Shakespearean monologues about survival. Season Six ended with a doozy, and there are more to come – thankfully, not all of them will end with someone getting his or her brains bashed in.

Jeffrey Dean Morgan understands the character
Morgan has had high-profile roles before: as a hunky patient on Grey’s Anatomy, as a shady private investigator on The Good Wife, as the Comedian in the movie adaptation of Alan Moore’s Watchmen comic. But he’s never been as primed to become a household name as he is now, playing a major ongoing character on one of TV’s most-watched shows. Speaking with Den of Geek, the actor said of his new role, “He’s got this irreverent sense of humor and this charisma. His use of the English language, I find rather brilliant.” More importantly, Morgan knows that the only way to make this man believable is to think of him as the person The Walking Dead is really about. He said, “If this show, seven years ago, had started following Negan instead of Rick Grimes, then he would be the hero of the story.”

Walking Dead fans love to hate him
Already during the production of the new season, strangers have been walking up to Morgan to tell him how mad they are at him for… well, for whatever it turns out he did in last season’s finale. To counteract that, his cast-mates have been filling their social media accounts with pictures of themselves with their new colleague, showing fans that he’s a wonderful guy in person, even if his character is a creep.

But let’s face it: Would we want Negan to less menacing? The main reason that he’s been so popular in the comics is that he’s a formidable opponent, with a way of explaining himself that’s almost appealing. If this were just another over-confident cartoon villain, the character wouldn’t rile fans up so much. It’s his power — and his powers of persuasion – that make him so damned unsettling.