After a bleak and often brutal stretch of episodes last fall, The Walking Dead wrapped the first half of its seventh season back in December with a rousing reunion between Rick, Michonne, Daryl, and Maggie at the Hilltop Colony. Our heroes gave every indication that they were ready to stop cautiously cowering from Negan and to start taking the fight directly to the Saviors. Given that this show’s head writers Scott M. Gimple and Robert Kirkman never rush through any plot development, don’t expect the Alexandrians to storm the Sanctuary any time soon. This spring’s set of TWD episodes will undoubtedly be about the slow process of building coalitions between settlements, while still keeping the bad guys placated until the time to strike presents itself. Plus, y’know, there are still zombies all over the place. That’s what even master strategists refer to as “a complication.”

So as the drama is set to resume this Monday, here’s a reminder of where all The Walking Dead‘s major characters are in the story, as well as what to look for going forward.

1. Rick appears to be out of his funk … but is he ready to be a leader again?
Let’s be honest: The only thing worse than Rick Grimes making dumb decisions that get a lot of people killed is him spending nearly eight full episodes pouting and doing nothing. In the midseason finale, Michonne finally got her boyfriend to see that there’s no real upside in continuing to be Negan’s slave, as he’s only going to keep demanding more and more; everyone’s life will be so miserable that survival won’t really be worth it. But just because Rick now agrees that they need a plan to defeat the Saviors doesn’t mean that he’s suddenly going to be in a hurry to put his people in mortal danger.

And don’t forget: Daryl just finished a dehumanizing stint as a prisoner at the Sanctuary, and our resident badass may need some time before he’s physically and mentally capable of taking up arms. So at the moment, it looks like the fired-up, more-than-capable Maggie and Michonne are best positioned to take command of this mission. The big question for the rest of season will be whether their former leader and his best hunter will fall into line behind them, or if they’re going to balk at their to-do list.

2. The Hilltop Colony and the Kingdom are about to get involved in the fight (and may soon be joined by others)
The best episodes of Season Seven so far have taken place away from Alexandria and the Sanctuary – specifically, the ones in the very different but fairly stable settlements of the Hilltop Colony, the Kingdom and Oceanside. Maggie seems to have become the de facto leader of the Hilltop, and much of that community appear ready to join her in a fight against the Saviors. But as we saw last fall, the Kingdom’s ruler Ezekiel is a strong but cautious man, who prefers to shelter his subjects from the reality of how they’re actually surviving. Meanwhile, the thriving all-female commune on the waterfront has gone out its way to shut themselves off from all potential alliances and entanglements. Our heroes will need every able body they can get if they’re going to win their freedom, but not every capable warrior will be easy to convince. (Carol, for example, is now living on her own and demanding to be left off the playing field entirely.) 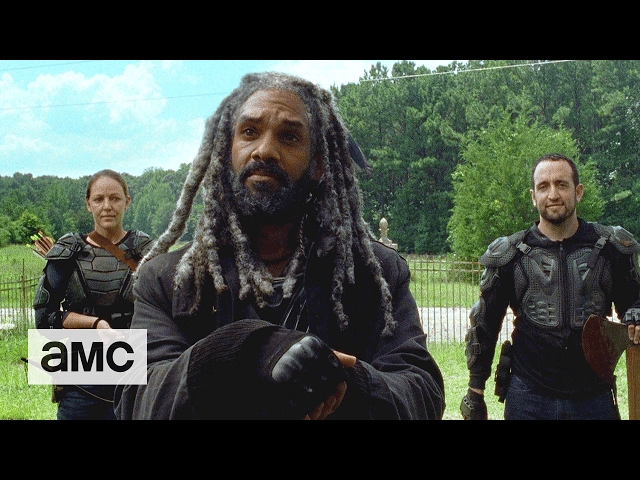 Is there be anyone else they can call on? The series has just about burned through all the factions and neighbourhoods that are in Kirkman’s comic books, though in the past, Gimple has shown a willingness to add characters and locations if that serves the TV version of The Walking Dead better. In interviews and promotions for the next eight episodes, the writers and actors have promised the world of the show will be getting larger. It wouldn’t be too surprising to meet some important new people by the end of March.

3. Something might be wrong with Carl
One of the more fertile themes in the show that’s been springing up over the past couple of years is that this new post-apocalyptic Earth’s children may not be “the future” (no matter what Whitney Houston once sang). Again and again, we encounter youngsters who’ve clearly gone off their nut, and have become remorseless killers with no firm understanding of the difference between good or bad – or even life or death.

Throughout the course of the series, Carl Grimes has had moments where he’s seemed fairly troubled, and overeager to pick up a gun to work through his issues. Toward the end of last year, he actually invaded the Sanctuary and picked off a few Saviors; but then after spending a day with Negan, Carl seemed more susceptible to his enemy’s philosophy of how to be strong, especially when contrasted with his currently spineless dad. The younger Grimes went in to the midseason break by his dad’s side at the Hilltop, but his mental state could be something to monitor in the weeks ahead.

4. Negan faces challenges from within and without
Some critics have complained that the season so far has featured far too much of that grinning sadist Negan, but in defense of Gimple and company, one beneficial effect of the recent focus on the show’s super-villain is that he’s been revealed as more vulnerable than he initially seemed. For one thing, he clearly has ego issues. The man wants to control everything, and needs everyone in his immediate vicinity to fear and obey him; and yet he also wants his servants to love him and to appreciate that he keeps them safe. Any resemblance between Negan and the current occupant of the Oval Office is … well, it definitely wasn’t intentional when the character was introduced, but the parallels may become more direct very soon.

Even disregarding his psychological damage, Negan could be in trouble because he’s alienated his own closest allies too much. He takes it as a point of pride that the former Savior fugitive Dwight is now his right-hand man, but he may be assuming too much when he insists that he’s “broken” his best soldier. His scarred lackey still plenty steamed, and with every new enemy that Negan tries to turn into a loyal employee – be it Daryl, Carl or now the bullet-manufacturing wizard Eugene – he sets up an opportunity for a full-blown rebellion.

5. It’s probably time for the show to start moving towards an endgame
From a business standpoint, The Walking Dead is still thriving, even as its ratings have slipped from historically astronomical to about on par with a typical 2010s TV hit. But 2016 – and much of 2015, too – didn’t exactly deliver peak Dead, creatively speaking. Last fall’s episodes were frequently repetitive and overlong, which was made all the tougher to be bear because they were also so often violent; longtime viewers felt punished by the show’s casual cruelty to the core cast. Kirkman’s comics are still a going concern, so there’s a lot of story left for the series to get to. Nevertheless, it wouldn’t be the worst idea for Gimple and AMC to take a cue from, say Lost or Game of Thrones, and start figuring out how much longer they want to go on with this. Not only might an announced end-date regenerate some fan excitement, but it might allow the most popular cable drama of all time to go out on top.