Weren’t we all hoping Andy Kaufman would show up? That was just one of the ways David Letterman’s masterpiece of a farewell played hideous tricks on the brain of any fan. The entire show was a scroll through the endless ways Dave changed our world. Especially that emotional final montage, as the Foo Fighters played “Everlong,” raving the words, “Promise not to stop when I say when.” So many images zooming by, so many memories — Drew Barrymore dancing on Dave’s desk, Madonna and Sandra Bernhard gossiping about West Village lesbian bars, an awesomely spaced-out Farrah Fawcett uttering the word “Wow.” It was enough to make any fan verklempt. As Janeane Garofalo once told Dave, after losing her train of thought, “I am so Farrah right now.” Today, we are all Farrah.

Dave ended the Late Show the way he never ran it and definitely didn’t begin it: giving a shit. He really wanted to make his final hour something special. When he announced his retirement last year, he took pains to do it in the middle of a totally ordinary show, after a mediocre-on-purpose monologue. Last night was different, beginning with a reel of former presidents (and one current one) quoting Gerald Ford’s words: “Our long national nightmare is over.” He was clearly thrown off by the chanting and yelling of the audience, before making his big announcement: “I’ll be honest with you — it’s beginning to look like I’m not gonna get the Tonight Show.“

The highlight was his Top 10 list, starring a few of his favorite guests revealing what they always wanted to tell Dave. Julia Louis-Dreyfus was the winner by a mile: “Thanks for letting me take part in another hugely disappointing series finale.” (Jerry Seinfeld winced a little at that one.) Steve Martin came in second: “Your extensive plastic surgery was both a necessity and a mistake.” Tina Fey didn’t rock her Spanx, but she did a groovy dance that made up for the corny Christopher Hitchens joke she got stuck with. (Hitch is dead, people. He can’t hear you. “You can never give the finger to the blind,” as Luna once sang.) Chris Rock, Alec Baldwin, Barbara Walters and more took their place onstage, until corduroy-suited cake-jumper Bill Murray arrived with Number One: “I’ll never have the money I owe you.”

Dave ran through the math: 33 years, 6028 shows, 8 minutes of laughter. He showed moving clips of Andy Kaufman (“Dear Andy — dear, dear Andy”) and Calvert De Forest as Larry “Bud” Melman. (One cherished Late Night memory: Melman counting down the Top 10 things people say when they meet him for the first time. Number One, if I recall correctly: “Excuse me, sir, this stall is taken.”) The fact that Andy Kaufman didn’t make a surprise appearance to sing “99 Bottles of Beer on the Wall” can only mean he really did die all those years ago. Damn it.

So who was that asshole who claimed the other day that TV finales always suck? Wait, that was me? Well, “always”-es were made to be punked, and Dave saved a great one for the end, compared to Johnny Carson’s weirdly stilted farewell or last year’s unwatchably lachrymose Jay Leno finale. Dave came on on sincere and acerbic — never an easy combo for anyone, least of all him. It was surprising how sentimental the whole thing was to watch, especially that final montage — and surprising to see how sentimental Dave allowed it to make him. This episode was “one for the ages,” as they say, except the ages it was for are the ages we lived through. I wasn’t planning on shedding tears at the sight of Andy Kaufman’s nose dripping, but it was that kind of night.

That final montage was a capsule history of the past 33 years, going back to the pre-cable days when oddballs like Sandra Bernhard or R.E.M. or Harvey Pekar or Pee Wee Herman had zero chance of invading America’s brain cells outside of Dave. (Do you have a friend who was gay in the Eighties? Ask them about the 1988 Madonna/Sandra thing. They might have a story worth hearing.) His early shows relentlessly mocked television and the people who watch it, while also mocking the whole idea of not watching TV — he loved to skewer the then-fashionable guilt people felt about watching too much of it. (As opposed to the now-fashionable guilt about not making more time for it.) His premise was that there was nothing edgy or dangerous about TV — no matter what you put on the air, once it’s there, TV is all it is, whether it’s underground comics or punk bands or pet tricks or sitcom starlets. An hour in Dave’s world reminded you that the America you lived in was a much weirder and funnier place than you realized.

Like so many Letterman fans, I got hooked via the music, back when late-night talk shows were something only parents watched. I tuned in to see R.E.M. and X in 1983, unable to believe my eyes that somebody was letting them just plug in and play on TV. R.E.M.’s first Letterman gig was the Beatles-on-Ed Sullivan for Eighties rock kids — simple details like the “Love Tractor” sticker on Peter Buck’s guitar or Mike Mills’ English Beat t-shirt seemed to define a way of life. And it worked because Dave was the guy in the suit; a key part of his genius was he never tried to compete with his guests hipness-wise, so his confidence put them at ease. (No painful-to-behold air-guitar faces for Dave.)

Last night he saved some of his most moving words for his friend and muse Paul Shaffer, whose Eighties TV commercial for Rolling Stone was as funny as any Letterman bit. (When Key and Peele visited the US office a couple of years ago, this ad was all they wanted to talk about — they both kept singing Paul’s jingle.) 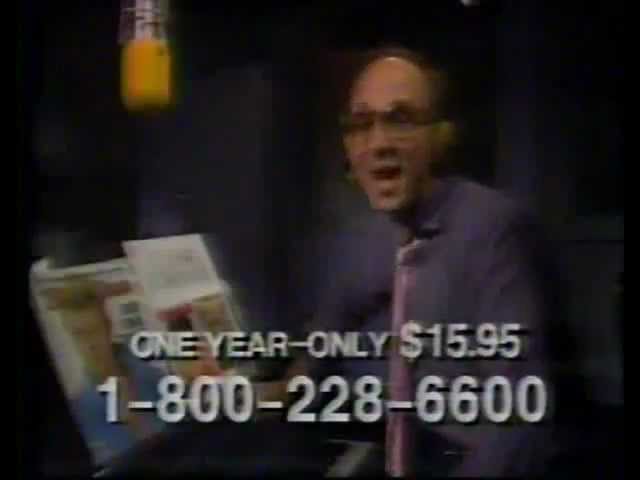 “A pretty high percentage of those shows absolutely sucked,” Dave crowed at the end, before getting surprisingly serious with the words, “Save a little for my funeral.” That joke audibly bombed with the studio audience — they were clearly not in the mood to contemplate such a thing, and neither was anyone else. He introduced Dave Grohl and company with one final “Thank you and goodnight” — but he didn’t return afterwards for a final wave or walk-off. By the time the Foo Fighters stopped playing, Dave had probably already slipped out of the building. A fitting way for him to go: He really did stop when he said when. And sentimental as he got about it, the now-former Late Show host seemed less impressed than anyone at his own finale. But as for the rest of us Letterman fans, all we can do is quote the immortal word of the late great Farrah: Wow. Thanks, Dave.