Frenchman Lucas Pouille reminded his Twitter followers on a late-December day that they could watch his practice session that day on both Twitter and Periscope. Over 800 thousand people either tuned in live or have watched a replay of the practice since. That’s pretty strange considering the world number 15 was the highest-ranked player on the court and it was a meaningless session a few days before Christmas, right? 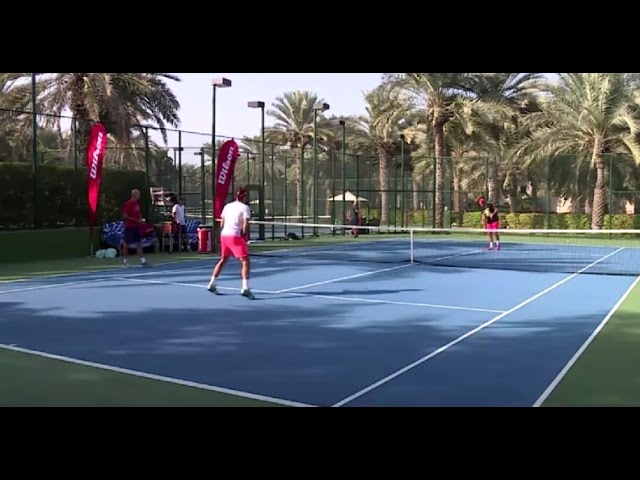 Roger the Great has won a record 17 Grand Slam titles and sat atop the world rankings longer than anybody else has, totaling 302 weeks over the course of his career. Publish the history books today and he’ll be named the best male tennis player ever. Considering the last time Federer was ranked this low was in May of 2001, this whole number 16 thing just doesn’t feel right. You could say it’s just a number, and that number doesn’t mean much. This is Roger Federer we’re talking about. He’s the guy whose mastery on the court was called a religious experience by one of America’s great writers.

But Federer is 35 years old and not the healthy android who played 65 consecutive majors from the 2000 Australian Open until the 2016 Australian Open. He showed vulnerability in 2013 while dealing with back issues, failing to reach a major final for the first time since 2002. But last year was arguably his toughest as the “Swiss Maestro” tore his meniscus in a freak accident the day after losing in the Australian Open semifinal, taking him out of competition for most of the year.

Federer not only missed the French Open, but after briefly returning to reach the Wimbledon semifinals, he took off the rest of the season to heal. “I just think the knee and the body needed a break,” he recently told the New York Times. “Now I can look back and say: ‘Look, if now it doesn’t go well, I did everything I possibly could. There are no regrets.'”

While there was really nothing to see in the tennis that Federer and Pouille played during their practice, a thought and a question came to mind: Federer means an infinite amount to tennis, but how much does he have left to give?

Federer has not won a Slam title since 2012 and has only reached three major finals during that time. He does not hit his groundstrokes with the same angular sting, nor is he as explosive in his movement that often resembles a waltz on the court. Tennis’ magic man likely needs to defend a semifinal appearance from last year’s Australian Open to stay inside the top 20.

Yet, it is incredibly hard to doubt Roger Federer. The guy has been so unbelievably good for so long, creating a face for tennis that has never gone away. His talent was never a secret, as he beat four-time defending Wimbledon champion Pete Sampras at the All England Club in 2001 when he was just 19 years old. It wasn’t like he just came out of nowhere; we’ve known this whole time. Sampras certainly did.

“There are a lot of young guys coming up, and Roger is one of them,” Sampras said after the match. “But I think he’s a little extra special than some of the other guys.”

It is rare in sports that a young gun is a sport’s shining star as well. Yet, Federer’s peers widely revered him at a young age.

“I think he’s the guy that all of us are chasing,” 2003 U.S. Open champion Andy Roddick said after losing to Federer at a warm-up tournament for the 2005 U.S. Open. At that point, Roger had only won five Slam crowns. “He’s the main guy and then there’s probably four or five of us that are – I don’t know. Maybe we need to do just a tag team effort or something, join forces, you know, like Power Rangers or something.”

Federer was so dominant so early on in his career that he entered the discussion regarding all-time-greats before arguably reaching his prime. A reporter asked Roddick the following question after Federer beat the American to win Wimbledon in 2005, when the Swiss was just 23: Do you think he could possibly be the best player ever?

“You’re not stretching far to make that argument. That’s for sure,” Roddick answered. “I think time will tell. If he keeps up this level, then I think so. I don’t know many people in history who would beat him.”

Again, he was only 23, proof that Federer is not a once in a generation talent; he is a once in a lifetime talent, and it shows in his following. It is more than a decade later, yet nearly a million people still rushed to a computer or phone screen to watch him hit some balls and play some practice points.

Perhaps the highlight of the session showed why Federer has had so many fans for as long as he has. While warming up his serve, Federer told fans watching (he was mic’d up, giving his commentary throughout the practice) that he was going to hit the ball toward his physio Daniel Troxler. Not surprisingly, he literally hit Troxler almost immediately after calling his shot.

“With Roger, it just seems like he thinks it, and it happens,” Roddick told the New York Times in 2015. “It’s an insane ability. The racket in his hand seems to just make sense.”

When he was comparing Federer’s game to finding faith, David Foster Wallace also called the his forehand “a great liquid whip.” Maybe you could call his racket a liquid wand, because some of the shots he has hit over his career – dipping passing shots, sneak attack returns, curling overheads from way off the court and perhaps most iconic of all, the tweener – have been borderline magical to watch.

A couple of years ago the Swiss came up with the SABR (Sneak Attack By Roger) in which he rushed the service box to return serve, which helped him win some points and make opponents think. No other player would dare run at a ball coming at them at well over 100 miles per hour.

Now that Federer has lost a step on his top competitors, it will be interesting to see what he comes up with to challenge the likes of world number one Andy Murray and 12-time major winner Novak Djokovic in 2017 after missing six months to let his knee and the rest of his body recover.

Sure, Federer is ranked sixteenth. Despite that, Roger was up two sets to one in last year’s Wimbledon semifinal against Milos Raonic – he has not been that far from the top of the sport.

Federer has a new season ahead and he just said in Australia that, “I took these six months off so I would be playing for hopefully another two to three years, not just another six months or so.”

Perhaps the rest of Federer’s career should not be spent wondering if he will win his eighteenth major, since Roger has proven that he is far too talented to ever be counted out.

Instead, that time should be used to appreciate him. Win or lose, countless Roger fans and general sports fans alike will follow his every move the rest of the way. Federer is arguably the most important player for tennis itself and unless there is a second “Federer,” the sport may never see someone as valuable again.