Suited up in full freestyle motocross gear, Robbie Maddison stood on the deck of a barge bobbing off the coast of Tahiti and prepared to live out a very literal pipe dream: Riding his motorbike directly into the maw of the world’s heaviest waves. Despite the presence of a full camera crew, and a rescue team in position along the menacing saltwater terrain of Teahupo’o, the man known as “Maddo” was understandably nervous.

“I’d become quite terrified, trembling in my boots,” he confessed. “But I made my bed and it was time to lie in it.”

Risk is nothing new to Maddison, a 34-year-old Aussie motorbike stunt rider whose resume includes a legendary New Year’s Eve jump onto the top of the Arc de Triomphe in front of the Las Vegas Paris hotel and a history-making leap over the Corinth Canal in Greece. But this was something different; aside from its recognition as having the world’s heaviest reef breaking waves, Teahupo’o is also one of the most dangerous surfing spots on the planet, with five recorded deaths since 2000. Loosely translated from Polynesian, its name means “the pile of heads.” 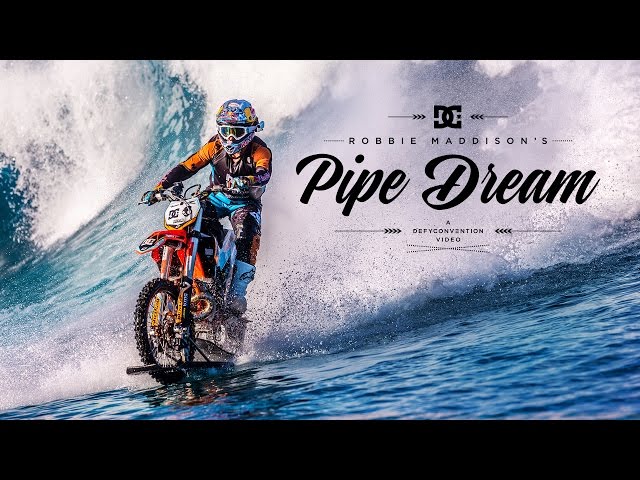 So what drove Maddison to tempt fate – and push the limits of technology? It all started during a wakeboarding adventure with friends. While riding on the water, Maddison realized that with the right mechanics, he could combine his love for moto and surf. His epiphany led to the development of a dozen different versions of custom skis that attached to his dirt bike, with skegs beneath to act as rudders for maneuverability and control. A paddle tire on the rear wheel would propel the bike forward on the water, but also handle well on land. After two years of trial and error, Maddison approached DC Shoes’ global brand leader Jeff Taylor with his idea of surfing on a motorcycle. Familiar with Maddo’s previous successful rides on water – he’d managed to go for several miles in Mission Bay – and his mechanical aptitude, Taylor wrote a check on the spot to support the project. Months later, all efforts paid off, as Maddo took to the ocean on his KTM 250 SX, making surfing on his motorbike a reality.

On Sunday, DC finally unveiled footage of Maddison’s historic ride – a clip very aptly titled Pipe Dream. And having survived unscathed, Maddo spoke with Rolling Stone from his Temecula, California home about his most defiant stunt to date.

Let’s start with the question on everyone’s mind: What made you decide to do this?
I’ve grown up surfing my whole life. If I didn’t end up in professional moto, I would be a professional surfer. I was winning competitions in both sports when I was a grommet. This dream is about combining two of my life’s passions in order to do something that has never been attempted.

I had played with the idea a few times on a dirt bike. You can ride on the water for a short time, until the front wheel breaks the surface and throws you over the handlebars. We set out to design a bike that would maintain a plane above the water for long periods of time, with a system in place for control and maneuverability. There were also some issues with the bike taking water into the motor. With some persistence, I rode the bike in San Diego’s Mission Bay for nearly eight miles. After that, I was able to approach Jeff Taylor at DC with pure confidence that I could ride a wave.

Did you have full control of the bike while riding on the waves?
Yeah, it works great. I’m able to ride up and down the wave, and make small adjustments by accelerating. During our development, I could ride out onto the lake at 50 mph on top of the water, turn the bike around and ride back to the shore. But a wave only travels at about 15 mph, a speed that would normally sink the bike. I was able to release the power of the bike and use more of the power of the wave to actually surf it.

But eventually, the bike would sink, right?
Each time the bike went under, we had extensive mechanical work to rebirth it for another run. We knew we were bound to sink the bike a few times in Tahiti, so we switched from a 450cc four-stroke motor to a two-stroke motor for the advantage of having a less-complicated engine and less electronics and wiring to deal with.

While you were filming, you were taken under by a giant wave in Teahupo’o. Walk us through what happened.
The worst possible scenario would be that I took on a “West bomb” wave that comes with an extra elbow, and the main section – where I intended to ride – would close out. Even on a surfboard, you never want to see that. A storm was just passing us by and the waves were coming in at 25-30 feet high. We waited, until I finally saw this massive black lump on the horizon. I took off from the barge and stayed with the wave, but I had about 500 feet to traverse in order to get into the main section so we could get that perfect shot. Once I got past the shoulder of the wave, I could clearly see that I was in a West bomb – a death sentence.

There I was on a motorcycle, with the worst thing that could possibly happen. I turned out from the wave and it crashed down behind me, chasing me down. I was picked up and thrown, and my bike landed on my back, knocking all the air out of me. It was the most violent ride I’ve ever been on, tumbling beneath the surface in full gear. Over the next four or five minutes, I only had two split-second moments when my head broke the surface and I could take in a fast breath, only to be yanked back down and tumbled with my bike. Everything was going white. I became completely limp and was prepared to take in a full breath of water, when I finally popped up. I could see the helicopter and Jet Skis, and had a quick moment to wave my arm so that they could locate me.

In short, you almost died. I think I know the answer, but, was it worth it?
Back on the boat, I was in tears. My friends and crew were completely rattled, having thought that I had drowned in the wave. It’s the gnarliest thing I have ever been through. I was so relieved to be alive and to have accomplished what we did in Tahiti. It was so incredible to see the culmination of my dream that didn’t come with a glorious medal or cheering crowds, but the reward of being the very first person to ever ride a motorcycle on these waters and do something entirely different.