There is one persistent question that has surrounded Rafael Nadal since his rise to the upper echelon of men’s tennis: How long will his body allow him to remain there? Back in 2009, when Nadal was 23 years old, I remember that my answer to that specific question was a slightly pessimistic two more years.

The Manacor native is now 28 years old, and indeed, he has had to deal with an impressive array of injuries. Recapping that history would be a painfully long exercise, so let’s just put Nadal’s issues in context. Since winning his first Grand Slam title at the 2005 French Open, he’s most notably been forced to miss five Grand Slams and four World Tour Finals. And yet, as things stand, Rafael Nadal is ranked third in the world and has won at least one Grand Slam trophy every year since ’05, for a total of 14. That puts him level with Pete Sampras, and only three behind Roger Federer’s all-time record of 17 major titles.

Nadal has won the Olympic gold medal in singles, has won the Davis Cup four times and holds the all-time record of ATP Masters 1000 wins, an insane 27 titles of that caliber. To put that last achievement in context, last year’s surprise Slam champions, Stan Wawrinka and Marin Cilic have a combined Masters 1000 haul of, um, one. Nadal holds a positive head-to-head record against his main rivals in this Golden Era of men’s tennis, most notably a thumping 23-10 mark against Federer. You’d think by now we would be as used to seeing Nadal triumph over adversity as we are watching him win Roland Garros. And yet, if someone asked me today how much longer I see Nadal at the top of the rankings, I’d probably say two more years. Again.

Why only two more years? The answer lies somewhere within Nadal’s fascinating history with the event that just started in Melbourne, Australia.

No Grand Slam better illustrates Nadal’s career – the improvement and the battles with both adversity and his body – than the Australian Open. It’s a story in two acts, really. The first act is one of incremental improvement. Nadal debuted in Melbourne as a precocious 17-year-old in 2004, making the third round and giving Aussie star Lleyton Hewitt a scare. The next year, Nadal met Hewitt (who would finish as the runner-up) in the fourth round, and pushed him to five sets. After missing the 2006 Australian Open due to, you guessed it, injury, Nadal kept making steady progress, bowing out in the quarterfinals in 2007 and the semis in 2008. His big breakthrough finally came in 2009, when he defeated compatriot Fernando Verdasco in a spectacular 5 hour and 10 minute semifinal (which doubles as the greatest tennis match my eyes have seen), only to turn around and beat his rival Federer in a thrilling five-set final. The 2009 Australian Open marked the first time Nadal made a hardcourt Slam final, and naturally, his first hardcourt Slam title. Act one finished in a blaze of glory.

Act two is entirely different, and somewhat bittersweet. This sets the tone:

While trying to defend his title in 2010, Nadal was forced to retire from his quarterfinal match against Andy Murray because of, yep, an injury (to his right knee). A similar situation arose in 2011, when Nadal tweaked his hamstring very early in his quarterfinal match against David Ferrer, but stayed on the court long enough to be dispatched in straight sets. In 2012, Nadal managed to stay healthy for the duration of the event and made the final. Across the net was newly minted nemesis, Novak Djokovic, who had beaten the Spaniard in their previous six meetings. The pair battled for 5 hours and 53 minutes, and Nadal even held a break advantage in the fifth set. However, Djokovic was still riding high after his insanely dominant 2011 season and eventually triumphed.

After missing the 2013 Australian Open because of, well, you should know by now, Nadal made a thrilling return to the Australian Open final last year. Across the net stood Wawrinka, a man who had not only failed to beat Nadal in any of their 12 previous meetings – but hadn’t even taken a set from Rafa. But just when a second Australian Open title seemed inevitable, Nadal’s predictable enemy struck again. Early in the second set, Nadal’s movement was severely impaired, and not by his famously problematic knees. Surprise of surprises, it was Nadal’s back that suddenly seized on him, turning the final into a somewhat farcical affair that dragged on despite the inevitability of the result.

The unexpected back injury set the tone for Nadal’s 2014 season, and it also signaled a change in Nadal’s relationship with his body. Previously, it was Nadal’s knees that threatened to derail his career. Yet for the most part, those knees gave him a pass in 2014. Nadal had to deal with his back pretty much all year (once a back patient, always a back patient, right?), only to be thrown another curveball in the summer. During practice ahead of his defense of a monumental 2013 summer hardcourt season (Nadal had swept the Canada and Cincinnati Masters 1000 along with winning the US Open, something that hadn’t been done since 2003), an injury to his right wrist kept Nadal in Mallorca until the Asian swing two months later. And just when Nadal was getting back into the rhythm of things in China, he was faced with yet another new issue: appendicitis. That didn’t stop him from entering two more events (losing early in both), but eventually that problematic organ forced the Spaniard to get surgery and put a premature end to his season.

Thus we arrive at this juncture. Rafael Nadal has played only seven tour matches since losing to rising star Nick Kyrgios at Wimbledon last year. If we compare this current stretch with the period starting after Wimbledon 2013 until right before the 2014 Australian Open, Nadal not only played 41 matches, but won four titles. This newest comeback has had an inauspicious start: in the first week of January, Nadal lost in the first round of the ATP 250 event in Doha to unheralded German journeyman Michael Berrer, a man ranked outside the top 120 who’s never won an ATP singles title.

But the larger question remains: given how many times Nadal has already had to find ways to get back on the court after his body forces him out, how much longer can he keep doing it? Particularly when the problems cease to be familiar – like the knees – and expand into areas of his body that had worked well before? At least Sisyphus was only pushing a rock over and over again. Same problem, just on repeat. Are all comebacks the same, even? Here’s what Nadal says about that:

A significant component of tennis is not only being able to react to an opponent’s shots, but to anticipate where those shots will be going. Knowing where an opponent will hit the ball can turn the nature of a point instantly. But how does one anticipate where (or when) the next injury will come? How can one muster the effort to recover, both physically and mentally? How does one face the grind when the opponent seems impossible to defeat?

This is where Toni Nadal’s teachings become extremely pivotal. Much has been made over the years of Rafael’s uncle and coach’s ability to convince his nephew that he is not above any of his competitors. That people like Federer or Djokovic are actually better than he is. While that might seem like a bleak way to approach elite competition, it has guided Nadal’s focus in a different direction:

“Ever since Rafa was young, when he was a boy, I have worked his mind, so he can be mentally strong,” Toni said. “Always the most important thing is the mind, because when you have a strong mind you will have a strong body and you can play strong shots. When you’re coming back from injury, if you don’t have a strong mind, you will find it very difficult.”

Nadal, has learned to embrace, even love the struggle of competition and the inevitable highs and lows of being a professional athlete. This is how you begin to understand Nadal’s genuine excitement for an event where he’s had such a tortured history: 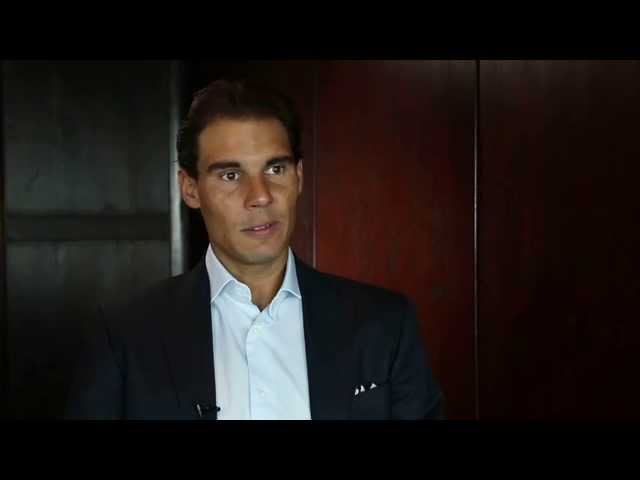 The part of that video that is mind blowing is when Nadal states that his favorite moment at the Australian Open wasn’t really when he won in 2009 after those two straight titanic battles. It was when he lost the 2012 final in agonizing fashion. Because even with the pain that came with defeat, there was that special feeling of knowing that adversity could be overcome.

And this is why Rafael Nadal is out there right now, full of doubt and insecurity, perpetually guarded against another blow of his unpredictable enemy. He seems unconcerned about his own legacy, even when he could conceivably end his career as the greatest male tennis player of all time. It does not seem like the man is out there chasing records or numbers. Nadal is out there because he knows that there is a special kind of joy that lies within the fight, and that a victory will be sweeter if the obstacles faced during the contest seemed insurmountable.

That’s why he’s practicing with an intensity that apparently dissuades pros from wanting to spar with him for too long, given the level of exhaustion that will come as a consequence. Will he win this year’s Australian Open? It doesn’t seem likely, even if he had a promising debut: a dominating 6-3, 6-2, 6-2 win over Mikhail Youzhny. At this stage, it’s not about trophies, really. It’s all about getting one win, then two wins, then three. Each victory is a building block towards the ultimate goal of regaining the level needed to survive at the top of men’s tennis. And that kind of progress will necessarily be incremental.

A few weeks after proceedings wrap up Down Under, Nadal will be playing on clay in South America, and likely accumulating more and more of those precious victories. With wins come titles, and with titles come bigger opportunities. The question, though, will continue to loom: When will Nadal’s adversary strike again? And, will he once again have the strength to regroup?

How long can he keep this impossible, Sisyphean act going? Maybe two more years. But don’t be surprised if you ask the same question at the start of the 2017 season, with Nadal still entrenched in the Top 5, and get the same answer.