Nothing is a coincidence or an accident in Mr. Robot, Sam Esmail’s hacker psycho-thriller that wormed its way into last year’s TV season like a particularly efficient computer virus. Visually stunning and meticulously plotted, the first season tapped into a rich vein of paranoia and disillusion running through the heart of late-stage capitalist society — in other words, it’s not exactly your normal TV drama.

Told from the perspective of Elliot Alderson (Rami Malek), a brilliant but mentally unstable hacker who becomes embroiled in a plot to dismantle the global economy,Mr. Robot is one of the most daring and unsettling shows to hit the airwaves in recent years. Sure, it bears more than a passing resemblance to Fight Club, with its unreliable narrator and its takedown of the status quo. But Esmail’s series is far more nuanced and sophisticated than those surface similarities would have you believe. We don’t just hear from Elliot and the voices in his head, we hear from everyone around him — and that’s just one of the aspects that elevates it above every other series about a screwed-up antihero on a mission.

With Season Two premiering in Australia on Thursday night via streaming service Presto, here’s a quick refresher on the slow-simmering mindfuck that was Mr. Robot‘s first season. Hello, friend.

Elliot Is a Mess
We’re introduced to Elliot — electrocuted undercut, omnipresent black hoodie and giant, haunted eyes — as a sort of techie Batman. By day, he’s a mild-mannered cybersecurity expert at a company called Allsafe; by night, he roots out evildoers by hacking into the bowels of their digital history. But of course, it’s much more complicated than that: Paranoid and socially inept, Elliot uses his skills to access the sordid histories of everyone he meets, even the people closest to him. To cope with his isolation — and what we eventually learn is an untreated dissociative disorder — he self-medicates with morphine. But like, it’s totally not a problem, he swears.

His Inner Circle Is Very Small
Elliot had a pretty fucked-up childhood: His mom was emotionally abusive, and his dad once pushed him out of a window to prove a point. His only real allies: Angela (Portia Doubleday), his childhood friend who works with him at Allsafe and keeps an eye on his well-being; and Shayla (Frankie Shaw), his drug dealer/hookup buddy. Elliot’s well-meaning boss, Gideon (Michel Gill), and his therapist, Krista (Gloria Reuben), seem to have his best interest at heart, but he keeps them at arm’s length.

Evil Corp Is … Evil
Mr. Robot’s big bad is E Corp, a.k.a. Evil Corp, a monolithic, all-powerful company that’s basically the corporate-personified one-percent. Case in point: They were responsible for a toxic waste leak that led to the slow deaths of both Elliot’s father and Angela’s mother, a sin that has gone unpunished. When there’s a security breach in their system, Evil Corp turns to Allsafe to repair it. Elliot investigates the hacked server and discovers a piece of malware installed by a mysterious organisation called fsociety, with specific instructions for him. Intrigued, Elliot complies, leading him to…

Oh Hey There, Mr. Robot
Hey, you’d be freaked out too if Christian Slater started yelling at you on the subway. Yet this is Elliot’s intro to the mysterious Mr. Robot, a shady-looking dude who reveals himself to be the de facto leader of fsociety. The mystery man takes his protégé to the collective’s headquarters, an abandoned arcade in Coney Island, where he reveals their master plan: to destroy Evil Corp’s extensive global data records, in the process upending the world economy, erasing all debt, and freeing the common man from the shackles of toxic capitalism. Elliot agrees to join the good fight, but soon discovers that Mr. Robot & co. aren’t above using violent means to reach their goals. 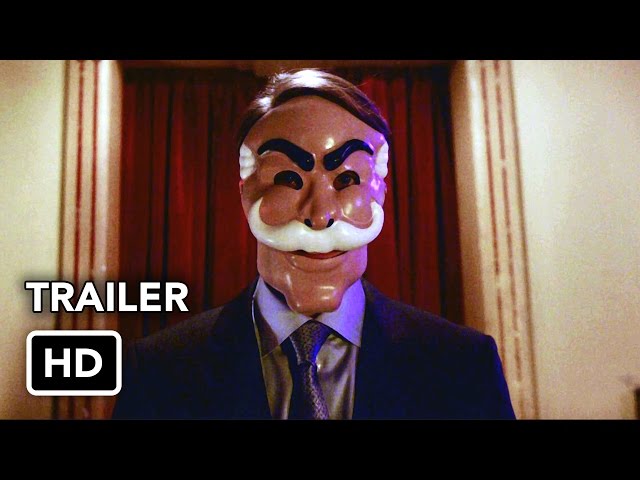 The Amazingly Creepy Wellicks
Patrick Bateman’s got nothing on Tyrell Wellick (Martin Wallström), the icy-eyed, cold-blooded Swede who’s climbing the ranks at Evil Corp. He tries and fails to recruit Elliot, then sets his sights on the CTO position at his company. When he doesn’t get the gig, he pays a homeless guy to let Tyrell beat the crap out of him. He and his Lady Macbeth-esque wife, Joanna (Stephanie Corneliussen), try to take down the new CTO and his wife through seduction, and eventually, murder. To distract the police from questioning her homicidal husband, a pregnant Joanna induces her own labor with a fork. Fun people, the Wellicks.

Darlene, fsociety and the Dark Army
Aside from Elliot and Mr. Robot, fsociety is comprised of a ragtag band of troubled geniuses — including Darlene (Carly Chaikin), a punky, no-bullshit tech whiz who quickly makes herself at home in Elliot’s life, much to his consternation. She even seems to be friends with Angela, which seems like a mighty big coincidence until you start to realise that Elliot’s reality is anything but objective. She also has ties to the Dark Army, a powerful Chinese hacking group that fsociety needs on its side in order for its plan to work.

Breaking Into Steel Mountain
So fsociety’s initial plan is twofold: break into Steel Mountain, Evil Corp’s backup facility; and erase the drives while the Dark Army destroys the rest of the company’s data overseas. Things go pear-shaped after their partners-in-crime back out at the last second on the orders of its enigmatic leader, a transgender woman named Whiterose (BD Wong). Meanwhile, Elliot’s going through morphine withdrawal, which makes his grasp on reality all the more tenuous.

Angela’s Fall from Grace
Angela’s idiot boyfriend, Ollie (Ben Rappaport), falls into a trap set by the Dark Army, who try to blackmail him into infecting Allsafe’s servers. When he confesses to his lady love, she ditches him, installs the malware using his name, and sets out to reopen a lawsuit against Evil Corp about the toxic-waste scandal. The lawyer she speaks to thinks it’s a lost cause without an inside man, so Angela reaches out to a former Evil Corp bigwig and eventually winds up working for the enemy. It remains to be seen whose side she’s on, but we hope she’s playing the long game.

When Do-Gooding Backfires
Elliot tries to play the white knight with Shayla, using his hacking chops to orchestrate the arrest of the drug kingpin, Fernando Vera (Elliot Villar), who raped her. Elliot and Shayla start dating and both briefly try to live a normal life, but their bliss isn’t long for this world: Vera orchestrates Shayla’s kidnapping from prison and forces Elliot to break him out before revealing that she had already been dead for hours. Oof.

You Can’t Escape Family
When Elliot finally returns to fsociety, he and Darlene join forces to dismantle a trap that would have put Allsafe wise to their plans. In celebration, Elliot leans in to kiss her and she shuts that down, because — guess what — she’s his sister! “Did you forget again? Did you forget who I am?” she asks him. Turns out Eliot has been hiding a lot from himself. Back at home, he pops in a photo CD and flips through snapshots from his childhood of his dead dad … who looks exactly like Christian Slater and used to run a computer repair shop called — wait for it — “Mr. Robot.” Though it was easy to guess that Elliot had been pulling a Tyler Durden all along, the particular identity of his alter ego is a brutal twist of the knife.

Endgame
Fired from Evil Corp but miraculously not arrested for murder, an unmoored Tyrell seeks out Elliot and demands in on his plans. The two of them go to fsociety’s command centre, where Elliot admits he did everything he did because he “wanted to save world.” Our hero “wakes up” days later in Tyrell’s SUV to discover that fsociety’s scheme has gone off without a hitch: The global economy has been thrown into turmoil, and people are rioting and celebrating on the streets. As Elliot struggles to remember what he did over the past few days — and to figure out what the hell happened to Tyrell — one of Evil Corp’s bigwigs shoots himself in the head on camera. Amidst the chaos, Mr. Robot convinces an addled Elliot to embrace his delusions. Meanwhile, in an opulent mansion somewhere, the CEO of Evil Corp shares cocktails with Whiterose — suggesting that the hacker and the hackee may not be the natural enemies we assume them to be.