At least 59 people were killed and 500 wounded when a shooter opened fire at the Route 91 Harvest Festival, a country music festival outside Las Vegas’ Mandalay Bay Sunday night. American country music singer Jason Aldean was performing onstage at the time of the shooting.

However, video from the festival shared on social media captured the deadliest mass shooting in modern U.S. history moments after it happened: Numerous witnesses posted video showing Aldean performing onstage when the sound of gunfire from an automatic weapon erupted in the distance. After several seconds, the music and onstage video production abruptly stopped as Aldean and his band ran off stage.

“Tonight has been beyond horrific. I still don’t know what to say but wanted to let everyone know that Me and my Crew are safe,” Aldean wrote on Instagram after the shooting. “My thoughts and prayers go out to everyone involved tonight. It hurts my heart that this would happen to anyone who was just coming out to enjoy what should have been a fun night.”

After about 30 seconds of silence, the shooter – later identified as 64-year-old Stephen Paddock of Mesquite, Nevada – again opened fire on the crowd, many of whom hid for cover behind security railings as festival-goers scattered in the aftermath of the shooting.

The Las Vegas Metro Police Department later revealed that Paddock had opened fire from his hotel room on the 32nd floor of the adjacent Mandalay Bay hotel; Paddock’s position was given away after smoke from all the gunfire triggered his room’s fire alarm, CNN’s Chris Cuomo reported. Paddock died of a self-inflicted gunshot wound just as SWAT was about to breach his hotel room, police said.

“Paddock opened fire on a crowd of more than 22,000 concert-goers from his hotel room on the 32nd floor of the Mandalay Bay Hotel on Sunday evening at approximately 10:08 p.m,” LVMPD said in a statement. “The victims were across the street attending the Route 91 Harvest Festival concert when bullets rang out. LVMPD SWAT responded to the call, breached the hotel room and found the suspect dead.”

LVMPD added, “The Clark County Fire Department estimated that approximately 406 people were transported to area hospitals and 50 are dead following Sunday evening’s shooting. Among the dead is an LVMPD officer who was off-duty at the time. His name is being withheld pending notification of next of kin. There were also two on-duty officers injured, one of whom was upgraded recently from critical to stable condition. The other sustained non-life threatening wounds.”

“Right now we believe it’s a solo act, a lone wolf attacker,” Clark County Sheriff Joe Lombardo said. “We are pretty confident there is no longer a threat.” Police later located Paddock’s female companion Marilou Danley, who they identified as a person of interest.

A search of Paddock’s room uncovered over 10 rifles, though no motive was revealed for the shooting at press time. “We don’t know what his belief system was at this time,” Lombardo said.

The shooter’s brother Eric Paddock, who lives in Orlando, told the Las Vegas Review-Journal Monday morning, “We have no idea how this happened. It’s like an asteroid just fell on top of our family.”

Stephen Paddock, who lived in a retirement community in Mesquite, had no prior criminal record in Nevada. “There is no reason we can imagine why Stephen would do something like this,” Eric Paddock continued. “All we can do is send our condolences to the people who died. Just no reason, no warning.” The brother also noted that their father was at one time a bank robber who landed on the FBI’s Most Wanted List in the early Seventies, the Daily Intelligencer reports.

President Trump tweeted early Monday morning, “My warmest condolences and sympathies to the victims and families of the terrible Las Vegas shooting. God bless you!”

At the White House Monday, Trump called the shooting “an act of pure evil.” “We are joined together today in shock, sadness and grief,” Trump said. “Hundreds of our citizens are now mourning the loss of a loved one… We cannot imagine their pain, we cannot fathom their loss.” Trump added he would visit Las Vegas on Wednesday. 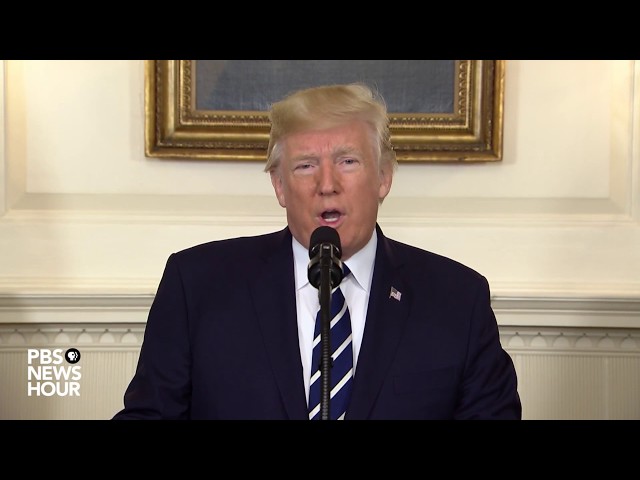 Nevada Governor Brian Sandoval tweeted, “A tragic and heinous act of violence has shaken the Nevada family. Our prayers are with the victims and all affected by this act of cowardice.”

“My thoughts and prayers are with the families of those killed and wounded in last night’s vicious and senseless attack outside the Mandalay Bay Resort,” Nevada senator Catherine Cortez Masto wrote in a statement. “I thank the first responders for taking down the gunman and working tirelessly to treat the wounded. I am working with the City of Las Vegas and Clark County to ensure that local officials have the resources they need to support our community and investigate these tragic events.”

Attorney General Jeff Sessions said, “I met with FBI Director Wray this morning. The investigation into the horrific shooting last night in Las Vegas is ongoing. I also spoke to Las Vegas Metropolitan Sheriff Joe Lombardo today. I expressed my gratitude for the courageous work of his officers through the night and offered him the full support of the FBI, the ATF and the entire Department of Justice as he takes the lead investigating the incident. To the many families whose lives have been changed forever by this heinous act, we offer you our prayers and our promise that we will do everything in our power to get justice for your loved ones.”

Country singer Jake Owen, who also performed at Route 91, tweeted in the aftermath, “Praying for everyone here in Vegas. I witnessed the most unimaginable event tonight. We are okay. Others aren’t. Please pray. Gun shots were ringing off of the stage rigging and road cases. No one knew where to go..thank you LVPD and responders for keeping us safe.”

“We are heartbroken over the tragedy that took place at the Route 91 Harvest festival. To think that anyone would want to inflict harm on a gathering of music lovers is beyond our comprehension,” Live Nation, the promoter behind the festival, said in a statement. “And while we are stunned and grieving over this incomprehensible act of violence, we know that this is a moment when we must come together to prevent more tragedies like this from occurring.”

In the aftermath of the shooting, politicians issued statements demanding that the government take action against the gun lobby and NRA to prevent these mass shooting terror attacks from continually happening.

In a statement Monday morning, Connecticut senator Chris Murphy wrote, “My heart goes out to the victims, their families, the first responders, and the entire Las Vegas community. Nowhere but America do horrific large-scale mass shootings happen with this degree of regularity. Last night’s massacre may go down as the deadliest in our nation’s history, but already this year there have been more mass shootings than days in the year.”

Murphy added, “This must stop. It is positively infuriating that my colleagues in Congress are so afraid of the gun industry that they pretend there aren’t public policy responses to this epidemic. There are, and the thoughts and prayers of politicians are cruelly hollow if they are paired with continued legislative indifference. It’s time for Congress to get off its ass and do something.”

Hillary Clinton wrote in a series of tweets, “Las Vegas, we are grieving with you—the victims, those who lost loved ones, the responders, & all affected by this cold-blooded massacre. The crowd fled at the sound of gunshots. Imagine the deaths if the shooter had a silencer, which the NRA wants to make easier to get. Our grief isn’t enough. We can and must put politics aside, stand up to the NRA, and work together to try to stop this from happening again.”

Massachusetts senator Elizabeth Warren tweeted, “I’m heartsick for the victims of last night’s massacre in Las Vegas & their loved ones. I’m heartsick for people in Nevada & across the country who woke up to this news & are worried that their family & friends are ok. Thoughts & prayers are NOT enough. Not when more moms & dads will bury kids this week, & more sons & daughters will grow up without parents. Tragedies like Las Vegas have happened too many times. We need to have the conversation about how to stop gun violence. We need it NOW.”