He started out in the writers’ room, coming up with funny lines for Fred Sanford and Vinnie Barbarino. Then, after branching out in to stand-up comedy, Garry Shandling spent three years perfecting a solid set before making his 1981 Tonight Show debut, and leaving Johnny Carson in stitches. Specials, guest-host stints, and groundbreaking sitcoms followed, before he came up with the idea of the ultimate late-night narcissist Larry Sanders — and even if Shandling hadn’t been a first-rate comic, his legacy as a small-screen genius would have been secured.

Here are 10 TV moments that show Garry Shandling doing what he did best: cracking sly, self-deprecating jokes, deconstructing small-screen genres and proving why he’s a genuine comedic icon. As Bill Lynch might sing: This is the list of Garry’s best television work, now watch all of them and laugh.

In 1978, after a stint writing for sitcoms like Sanford and Son and Welcome Back, Kotter, a frustrated Shandling turned to standup comedy, determined to break free of the formulas he thought were killing comedy. He focused instead on the maddening minutiae of everyday life – today, we call it “observational humor” – and developed an arsenal of acrid asides that would become his calling card.

Three years later, he was making his debut on The Tonight Show, where his grimacing gimmick was on full display as he rattled off a list of annoyances as only he could (“I ate dinner last night at a friend of mine’s house and he has – what do you call those things? A Baby.”) In short, he could hardly hide his contempt, though you could tell Carson loved it … soon, Shandling was serving as a guest host for Johnny. And, as you probably know, he’d use those experiences to create a rather infamous chat show of his own. JM

Shandling was already a rising star in the comedy world when he made his first appearance on Letterman’s show in 1983, but the set he delivered that night was a career highlight. Witty, dry, and self-deprecating to the extreme (“It’s weird to hear a girl laugh when I’m not making love to her”), the 33-year-old Shandling crushed hisLate Night debut with an unforgettably graphic bit about his gruesome sex life. And yet, the deadpan interview he did with Letterman immediately afterwards might be an even greater testament to his comic genius. DE

Seen today, Shandling’s first stand-up special feels less like an extension of his Tonight Show appearances than a dry run for the meta-sitcom who’d do for Showtime the next year. Yes, he does close to an hour of his hilarious observational comedy for a Sin City audience (a favorite throwaway bit: “You guys ever shoplift salamis when you were kids? You go into a grocery store, put one in your pants and walk out. Because no one is going to stop you and go, ‘Hey, is that a salami in your pants?'”). But for the first 15 minutes, the comic treats the audience like a close companion, commiserating on his sad-sack romantic state and conducting a travelogue around the casinos. He could have called It’s Garry Shandling’s Comedy Special. DF

Shandling will be remembered for The Larry Sanders Show, but It’s Garry Shandling’s Show is every bit as funny, and perhaps even harder to forget — and not just because Bill Lynch’s fittingly self-reflexive theme song (“This is the theme/to Garry’s show/I’m almost halfway finished … “) is one of the most insidious ear worms of all time. Airing from 1986 to 1990, the comedian’s first sitcom obliterated the fourth wall as it followed a neurotic stand-up named Garry Shandling across 72 episodes of peerlessly surreal meta-adventures. Paving the way for Seinfeld, Louie, and the age of modernist comedy, the show didn’t just break the rules — it completely changed the game. DE

The same year that Shandling launched the meta-sitcom It’s Garry Shandling’s Show and became a repeat guest host on The Tonight Show With Johnny Carson, he upped the ante further: starring in his own Carson-style faux–25th anniversary special for Showtime. “It’s so wonderful, 25 years,” he said in the opening monologue. “I’m nervous. Twenty-five years has been a long time. I never thought we’d make it this far.” It’s like an in-joke to an in-joke to a future in-joke (The Larry Sanders Show), yet Shandling delivered it with aplomb and made viewers feel like they were in on the gag. Segments include include a censored flashback with Mr. Ed, an interview with Donny Osmond (“He’s been on the show many times”) and requisite jokes about Shandling’s hair and future unemployment. KG

Between his two television shows, Shandling returned to standup comedy and recorded a set for HBO with the descriptive title Garry Shandling: Stand-Up. In his signature fashion, he kicked things off with a stinging meta-jab for viewers at home – “Thank you for not being too cheap to say, ‘Hey, we’ll watch it when it comes out on HBO” – and, of course, jokes about his love-making ability and his hair. The material spanned the timely (jokes about LAPD brutality, Bob Dylan’s strange appearance at the 1991 Grammys) and timeless (relationships, commitment issues, penises). Toward the end, an audience member asks if he’d do another series after It’s Garry Shandling’s Show. The audience cheered and the comic compared it to college. “The show was four years long, just like college and it prepared me for absolutely nothing, just like college,” he said. “I went to the unemployment office, they said, ‘What are you looking for?’ I said, ‘Something about a half-hour a week.'” KG 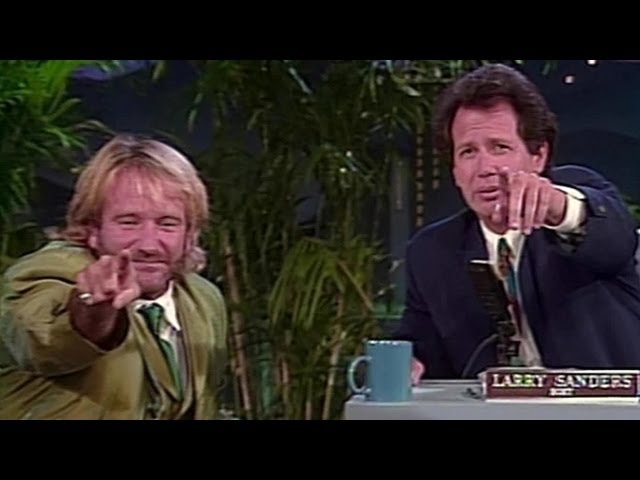 Shandling’s regular stint as the guest host on The Tonight Show helped hone his late-night talk show chops — NBC actually offered him Letterman’s 12:30am slot when Dave jumped ship — but the comic would end putting that skill set not to take over a franchise, but to deconstruct the whole damned game. From 1992 to 1994, The Larry Sanders Show cast co-creator Shandling as a fictional TV personality that was both a valentine to Carson, et al. and the funniest critique of that chatting-with-celebrity gig ever. He had his own catch phrase (“No flipping!”), his own obsequious Ed McMahon-style sidekick (Jeffrey Tambor’s “Hey Now” Hank Kingsley” is a genuinely genius creation) and any number of neuroses and backstage shenanigans. The show’s pilot lays it all out and set the tone beautifully. For six season, there would be no flipping. DF

A squiggly version of Shandling stepped into the office of Dr. Katz Professional Therapist in 1995. The intimate, lip-smacking session was ideal for gags about devotion, colon exams and sex: “I’m good in bed … I never fall out.” CW 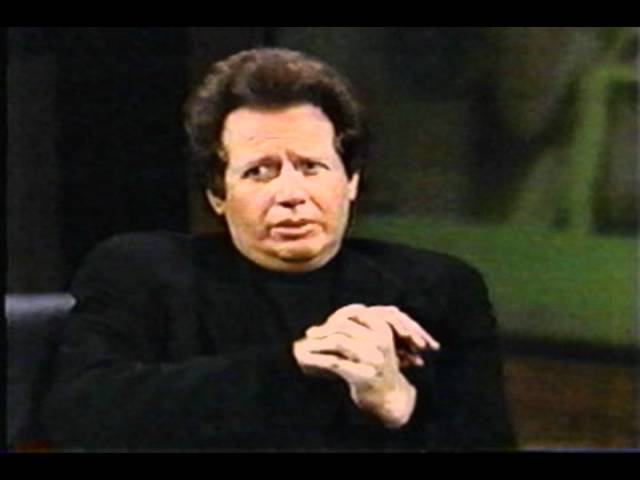 For the 12th episode of the long running Dennis Miller Live, the excitable czar of snark sat down with the comparatively mellow Shandling (“By the way, we are up against the Weather Channel, so calm down”). In his trademark deadpan, the comedian begins roasting Miller (“I brought a list of your references with me, so I hope I can follow you along”) before turning on his audience (Says Shandling to one viewer calling in, “Mary, you know, we’re going through a tunnel right now!”). Hilarious barbs delivered with quickness and cool. CW

One of the great recurring gags on The Larry Sanders Show was David Duchovny’s intense personal feelings for the talk show host. As the X-Files star once explained to Larry, “It’s definitely a heterosexual feeling, but it’s directed at you.” In the series finale, Sanders found himself in a hotel room with Duchovny, begging him to appear on the final episode of the talk show — which quickly devolves into a creepy parody of Basic Instinct. Watch Garry’s reaction shot. Priceless. AG

On a January 2016 episode of the Crackle show Comedians in Cars Getting Coffee, Shandling stopped by a diner with longtime friend Jerry Seinfeld. The ominously titled episode — “It’s Great That Garry Shandling Is Still Alive” — sees the pair joking about everything from Matthew McConaughey to the Dalai Lama, but the episode finds itself coming back to the topic of death throughout. Shandling reflects on the loss of Robin Williams more than once during his appearance, doing a tasteful bit on the idea of how the only time a person in their Sixties is referred to as young is when they pass away. At the diner, the stand-up plans his own funeral: “What I want is an actual boxing referee to do a count, and at ‘five,’ just wave it off and go, ‘He’s not getting up.'” A hysterical Seinfeld drops his silverware from laughing so hard. It was Shandling’s final public appearance. BS