“Sorry, I’m in a bit of a fog. I’ve got a head full of Xanax. I’ll try and not sound like Anna Nicole Smith”. It’s exactly the kind of straight-shot introduction you’d expect when the man on the other end of the phone is Doug Stanhope, the trailblazing US comedian who has never steered clear of controversy. Christianity, AIDS, pedophilia, national pride, abortion. They’re all topics that have made their way into his routine over the past fifteen years. Alongside all this and, somewhat unexpectedly, there’s his views on animal cruelty.

“My Twitter kinda blew up, people linking to that old Charlie Brooker segment I did about the Grand National”, Doug recalls how he discovered about last week’s events at the Melbourne Cup where two horses died after the race. “Also, I have a celebrity death pool, so I check Wikipedia for notable deaths every day and saw there were two 6-year old racehorses listed as notable celebrity deaths, so I figured that’s what the Twittering was all about.”

For the uninitiated, a celebrity death pool is pretty much exactly what it sounds like — a game centred around on betting on when celebrities will die. Of course, this seems like a fairly distasteful and even immoral “game”, but as he routinely does through his comedy, Doug detaches the pre-defined social standards of the issue and applies his own uniquely logical perspective. “Just look at yourself, you have life insurance and anytime you think about retirement, you gamble on how long you’re going to live. Gambling on a celebrity’s death isn’t really as gruesome as it sounds and it certainly isn’t as gruesome as the Grand National or any other animal abuse.”

The scope of what he deems to be “animal abuse” extends beyond horse-racing, including drug-sniffing dogs, circuses, police horses — pretty much any field where an animal is punching a clock for our own entertainment. “You’re already fucked being an animal, and now you’ve got a gig?”, he bluntly states. This isn’t purely a ‘bit’, but clearly something he feels strongly about.

It’s a level of conviction that’s at the heart of much of Stanhope’s routine which, although pushing the boundaries of what’s considered socially acceptable, is still primarily based around his own staunchly-set opinions on a variety of issues. The reciprocation of the audience’s own views — Doug’s ever-growing loyal band of followers — is obviously important, but it’s debatable on whether or not the audience needs to agree with his viewpoints to find his work entertaining.

He’s a convincing spokesperson for his causes and while the stage character he presents is somewhere between an angry drunk and a neutered lost cause, his overarching and firmly held social views on equality, fairness and personal independence makes him an admirable alternative leader. A role he’s obviously taken — at least in some form — seriously in the past, taking the somewhat expected shift into politics in 2008, announcing that he would run for president as a Libertarian. It was however, an extremely short-lived endeavour with the comedian quickly realising that it wasn’t a world he wanted to be part of. “It took a brief period of doing that, thinking it would be funny, before I realised not only was it incredibly complicated but it’s also hugely boring. If I had done it as a complete joke rather than signing up, putting in the paperwork that’s one thing. All of a sudden [the Libertarian party] were taking me half-seriously and I had to explain to them that I really have no fucking idea what I’m doing.”

But an environment where Doug does know exactly what he’s doing is on stage. He’s toured relentlessly over the past decade and built a reputation as one of America’s finest cutting-edge comics. This ever-increasing level of fame, however, has caused the unplanned disarmament of what is one of his strongest weapons — shock.

“Now that I’ve grown my audience they know what they are there to see. I do miss those [early] days, and it makes it a challenge to find out where I can go to even make my audience uncomfortable. That’s a fun challenge.”

On much of his early videos, Doug frequently takes a stance that could even be viewed as aggressive, as he pushes back, actively searching for the limit of what his audience is capable of laughing at. He seemingly takes great pleasure hanging right on that line of acceptability before pushing it with the punchline and reaching the audience’s endpoint — a limit often signified by discernible gasps. While, at other moments, these same punchlines are met with just a solitary few hearty chuckles that transition from inebriated laughter to a jeer as those responsible realise the rest of the crowd around them have more robust decadency filters.

Hitting that wall is now becoming a rarer occurrence though. “You can occasionally still piss someone off”, Doug explains, with a hint of nostalgic sadness in his voice, “I don’t show up to a random night at a comedy store for a bachelorette party, people who come to my shows are pretty hardcore now”.

On this spectrum of “hardcore” fans, one Australian woman is in a league of her own. Jasmine, an obsessive follower from Brisbane, has stalked Doug for a number of years, described by the comedian as “running the whole gambit” from love-to-hate-to complaining that she doesn’t have access to her kids anymore due to a custody dispute.

At one stage she was sending up to 40 emails a day, but she’s gone uncharacteristically quiet in recent years.

“I actually looked it up, I havent heard from her since 2011 when she was asking to move to Arizona and wanted me to pay for it”. He sounds surprisingly calm about the whole scenario and even a little disappointed that he hasn’t heard from her since announcing his Australian tour. “I’ve gotta email that Jasmine and see if she’s still around”, he continues. It’s an nonchalant perspective that continues through to the press surrounding the tour, which mentions that tickets will be left out at every venue for Jasmine just in case she turns up.

This will be Doug’s first ever tour of Australia, only previously playing a handful of low-key shows in Sydney back in 2003. Initially taking the unconventional approach of simply announcing one show (without a venue listed) in order to gauge local interest, they ended up selling “a shitload of tickets” and booked a run of gigs taking in most major cities. Doug, however, is a little disappointed the ‘red centre’ didn’t make it onto the list. “I wanted to play Alice Springs. I’m sure it was cost prohibitive, I’m sure if it wasn’t my manager would’ve booked it. He’s a capitalist. If there was a big chunk of money there I’d be going there, whether I wanted to or not.” 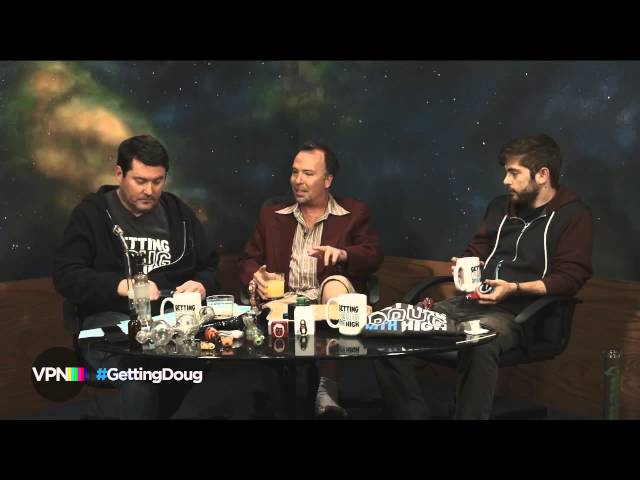 In preparation for the tour, Doug arrived in Australia a few days early, with the aim to do research on what aspects of his routine need to be tweaked for the local audience as well as hopefully pick up on a few local news bits to work in somewhere. As he explains, he’s not particularly interested in simply playing a greatest hits set, “anything to break up the monotony, because the more you say a joke, the less funny it seems, if you have just one new great chunk off the top or a good reference from the day it makes the rest of the act seem fresh”.