WrestleMania 33 must have been born in early June, because it was as two-faced as a Gemini. The first half of The Ultimate Thrill Ride (a term that, in the biggest upset of the night, was not repeated to the point of insanity) was a brisk hybrid of styles and matches that made you think that WWE knew what it was doing all along with this lackluster build. As the clock struck 9:30 Eastern, however, something became rotten in the state of Florida. From the moment Triple H rode out in his police-aided entrance, through the final shot of Undertaker being swallowed by the longest ramp in existence, the second-half of Mania was a slog of plodding wrestling, brief matches and boos. The night started with AJ Styles attempting to murder Shane McMahon in real life, but ended with Roman Reigns trying to murder the concept of happiness.

The most thrilling part about the night was whether the 13-match extravaganza would end on April 2nd or 3rd (it ended in the very wee hours of Monday morning, with the fireworks for Roman Reigns hitting at exactly midnight). What was shaping up to be the best Mania since the iconic 30 instead turned out to be a seven-hour roller coaster where the second half is just being stuck upside down in a loop for track maintenance. With that being said, WWE has no breaks, and they’re back at it with the almost-as-anticipated Raw After Mania and the new SmackDown After the Raw After Mania. As we now shift gears towards the dog days of SummerSlam, here are the main takeaways from a WrestleMania that shone bright like a diamond before turning into a lump of flak jacket-coloured clay.

7. Both Women’s Divisions need fresh blood or new ideas
Take your pick: would you prefer a tiny women’s division with only four wrestlers (and, really, only three of those matter), or would you prefer a larger and messier cluster-you-know-what that elevates no one but the winner? Raw and SmackDown, respectively, have to think of new ways to book the women’s divisions, because WrestleMania 33 was not the move. Starting with Team Red, the action in the ring was great for the most part, and the Horsewomen working together to eliminate Nia Jax was a nice touch. But eliminating Sasha Banks on a transitional move was a huge mistake that brought the quality of the match down, both in terms of in-ring ability and storytelling. Wasn’t the obvious story here to have them all eliminate Nia, before Sasha and Bayley worked to eliminate the thorn in their side (Charlotte)? And then, shouldn’t Sasha have turned on Bayley to set up the Next Great Feud? Apparently not; at least Charlotte didn’t become the 16-time women’s champion, so there’s a plus.

The SmackDown women, on the other hand, did not deliver on any front. Between Natalya’s failed double sharpshooter, Becky Lynch’s unfortunate outfit and irrelevance, and Naomi wiping out the entire division with a crossbody, this was not the wave. It’s understandable that they wanted to give the hometown girl a big win, especially since she was stripped of her title only due to injury, but even Naomi has to be looking back at her win with trepidation. A match that didn’t even go one minute per wrestler (six women went five minutes and 35 seconds), this was a throwback in the worst way to the previous era of women’s wrestling, where getting everyone on the card was more important than advancing the division. Here’s hoping that SmackDown channels a better writing team going forward, otherwise, the only three women who will matter in WWE are the same three women we’ve been watching on Raw for months.

6. The Hardy Boyz are back, and they’re still BROKEN.
It was rumored for months, but did anyone really expect it to happen? Thanks to the New Day (who, by the way, were excellent hosts; funny when called upon and out of the way when not), the Raw tag team titles match became the opposite of OBSOLETE, as the Hardy Boyz made their long-awaited return to a WWE ring. Of course, not only has WWE changed since their departure, but so have the Hardyz.

Broken Matt Hardy was the hottest act in independent wrestling in 2016, and turning Jeff Hardy into Brother Nero gave the former and forever daredevil new hype. Debuting them in a four-way ladder match was as perfect as a warm blanket on a winter’s day, and seeing Jeff risk his entire life by swanton bombing Cesaro and Sheamus off a 20-foot ladder was the best WrestleMania X-7 callback we could have hoped for. Now, the Hardy Boyz are ready to DELETE their way back into WWE fan’s hearts, and a stale-ass tag team division just became the most must-see part of Raw. WONDERFUL!

5. John Cena proposing to Nikki Bella is the one true WrestleMania moment
Go jump in a lake if you didn’t love the ending of the mixed tag team match. You might just be dead inside. After dispatching of Miz and Maryse with the power of synchronised love, John Cena and Nikki Bella gave us the most telegraphed and yet fantastic moment of the night. Sure, Nikki probably already said yes backstage, but seeing goofy-ass John Cena propose to his girlfriend in the middle of a WrestleMania ring while his mom watched from the front row? That’s magic in a way that no other entertainment can match. It was also the last bit of happiness that we would all feel before WrestleMania 33 turned heel on the fans in its second, interminable half. 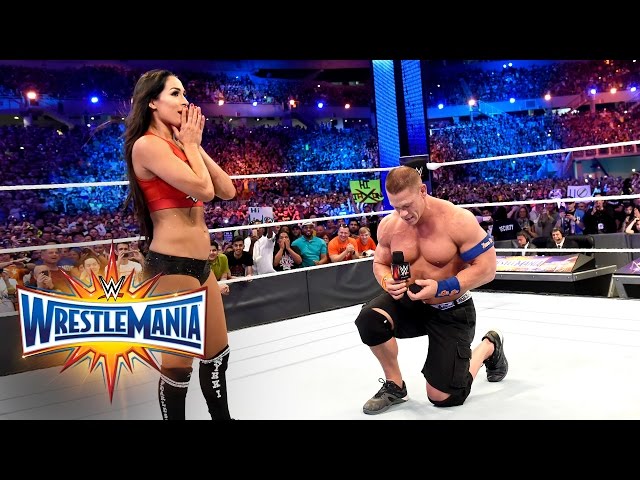 4. It’s time for Triple H to hang it up
The over-arching theme of the second half of WrestleMania 33 is that the Attitude Era should finally find its spot in the graveyard of professional wrestling (well, except the Hardyz, of course). Triple H putting on a 25-minute match with Seth Rollins seems like a bad idea on paper, but it was even worse in execution. More than any match since The Streak was conquered, this unsanctioned grudge match killed the crowd’s momentum dead. It was reminiscent of HHH’s main event with Randy Orton in 2009, only this time, it didn’t have an all-time classic like Undertaker-Shawn Michaels to blame for a burned-out crowd.

For his part, Rollins shone like the babyface he was born to be but isn’t quite yet. The selling of the knee was on-point throughout, his Phoenix Splash picked a good time to land properly, and the finish was pretty dope. But the Triple H “main event” style of match has passed the King of Kings by; aside from his barnburner opener against Daniel Bryan at WrestleMania 30, he has not put on a good Mania match since John Cena in 2006 if you’re being generous, Batista the year before if you’re not. Trips does a lot of good for WWE, and NXT is still putting out classics every time out, but it’s time for The Game to take his own last walk to the back and call it a day on a career that was never as good as he thought it should be.

3. WWE has no idea how to handle Bray Wyatt
Shame on all of us that thought WWE finally learned how to book Bray Wyatt properly. Following his Elimination Chamber domination of both John Cena and AJ Styles, it was seemingly safe to think that the Eater of Worlds would find his place at the top of the card, especially if the WWE was about to need a major injection of supernatural powers (spoilers for the main event, I guess). And yet, for all that, Randy Orton survived some of the dumbest crap to win the WWE Championship in a ten-minute dud of a match. That Bray’s big move was to turn the ring into maggots, worms and cockroaches is so emblematic of the type of mystique that does not fly is no surprise; after all, this company gave him a stupid hologram, a possessed demon child and an exploding TV as big climactic moments. Bray losing to Orton, who definitely did not need the title, is bad enough; doing it because the powers of PROJECTED VIDEO SCREEN GROSSNESS weren’t enough is just pissing on Sister Abigail’s grave.

2. Goldberg and Brock Lesnar did what they needed to do, and now we can move on
Brock Lesnar beating Goldberg was exactly the type of match it needed to be, and it was placed perfectly on the card as a revitalising adrenaline shot to the spine. The hemming and hawing over a five-minute main event was nullified by placing this third-to-last, and the fact that it followed both the Bray Wyatt/Randy Orton disappointment and the Triple H/Seth Rollins snorefest made its brief yet intense duration feel like manna from heaven. The story told was simple as well; Brock finally figured out how to survive the only two moves Goldberg has, and so he beat the 50-year-old champ with the only 2 moves HE has. Simple, effective, and now we can move on to Finn Balor beating Brock Lesnar…hopefully.

1. The Undertaker’s last match was a giant bummer
Let’s hope that, in the years to come, everyone remembers only the theatrics of the Undertaker’s swan song. Jim Ross coming down to call the match. The flames and trap doors and five-minute entrance walk. The relinquishing of the gloves, the coat, the hat. And the final fist, held in the air as it had so many times before, quivering with the weight of 25 WrestleManias. The more that we focus on that, the better, because the specifics of Undertaker vs. Roman Reigns are some of the most depressing in recent wrestling memory.

This has very little to do with Reigns, who was continually booed by a hostile Orlando crowd on the back-end of a seven-hour wrestling program. Reigns was fine in his role, doing his part where he could and really soaking in the heat that he would have received even as a beloved babyface. Undertaker, on the other hand…woof. From the botched Last Ride that looked like a bright neon “UNDERTAKER RETIRE” sign, to the chokeslam that got less air than ever, Taker was a man defeated by time more than circumstance. He truly should have retired when the Streak was broken, when a hospital visit was in the card immediately after the match. Instead, he lived on to pass the rub on to Reigns in the sloppiest, saddest manner possible. It’s impossible to tarnish Undertaker’s legacy, but the exclamation point at the end felt more like a blank space, a sentence ended too short because its author died on the way to the punctuation.

Rest in Peace, Undertaker. You’ve earned it and then some.