A review of the Lovecraft Country season finale, “Full Circle,” coming up just as soon as the whole car sings along to “Sh-Boom” by The Chords…

“He knew telling a story was a kind of power, but he also knew it wasn’t enough.” —Diana

Throughout this often remarkable, occasionally vexing first season of Lovecraft Country, we’ve talked about the show’s impressive, at times incompatible, stew of ingredients. It mixed anthological stories, like Leti’s haunted-house nightmare or Hippolyta’s adventures through time and space, with the serialized cold war between the Freeman and Braithwhite families. It ruminated on being black in America in the Fifties versus today, and how little has changed since then. It used monsters as metaphors for racist oppression, or sexual abuse, while acknowledging that human monsters are fundamentally scarier than ghosts or shoggoths.

It’s been a wild, albeit uneven, ride. Lovecraft at its very best — Leti dancing with her baseball bat, or Tic catching Montrose on the disintegrating walkway under the museum, or Montrose’s speech about the real-life victims of the Tulsa massacre — was a stunning work of art, as powerful as almost anything we’ve seen on television in years. But it could also be narratively muddled, and was rarely as emotionally potent when returning to the main plot than when it was taking all these detours.With “Full Circle,” Misha Green (who wrote the finale script based on a story by her and Ihuoma Ofordire; Nelson McCormick directed it) runs out of road for the year. No more side trips, no more blurring of the line between the past and the present. Just resolve this primary story, and tie off as many other plot threads as possible in the bargain.

And the finale certainly accomplishes its goals. Our heroes return from Tulsa (by way of Kentucky) determined to do two things: save Diana’s life, and stop Christina from gaining immortality. The first is resolved fairly quickly, after Tic and Leti get some additional instruction from the spirits of Hanna and Hattie. The latter task takes the rest of the episode, and it’s not without a cost: Christina murders Ruby to foil the Freemans’ attempt to counter her spell with their own, and Tic apparently bleeds to death during the ritual. Ji-Ah’s presence allows the counter-spell to work despite Christina’s efforts, and the season concludes with the evocative image of Diana choking the life out of her family’s tormentor with a new robotic arm, then watching as her new pet shoggoth howls at the moon.

That’s one of several great moments sprinkled throughout the finale. The drive to Ardham lacks the peril of Tic and Leti’s first trip, but the sequence where Diana comes out of her post-curse shell to lead her extended family — even grumpy, reluctant Montrose — in a singalong to “Sh-Boom” is a delight (and more than a little reminiscent of the iconic “Tiny Dancer” scene from Almost Famous). The simultaneous battles in the tower (between Leti and Christina-as-Ruby) and on the bridge (between Montrose, Hippolyta, Ji-Ah, and Christina’s many acolytes) are edited together beautifully. And Atticus’ childlike affect in his mother’s presence is yet another reminder of just how riveting Jonathan Majors can be when he gets to show how vulnerable this marble statue of a man truly is. 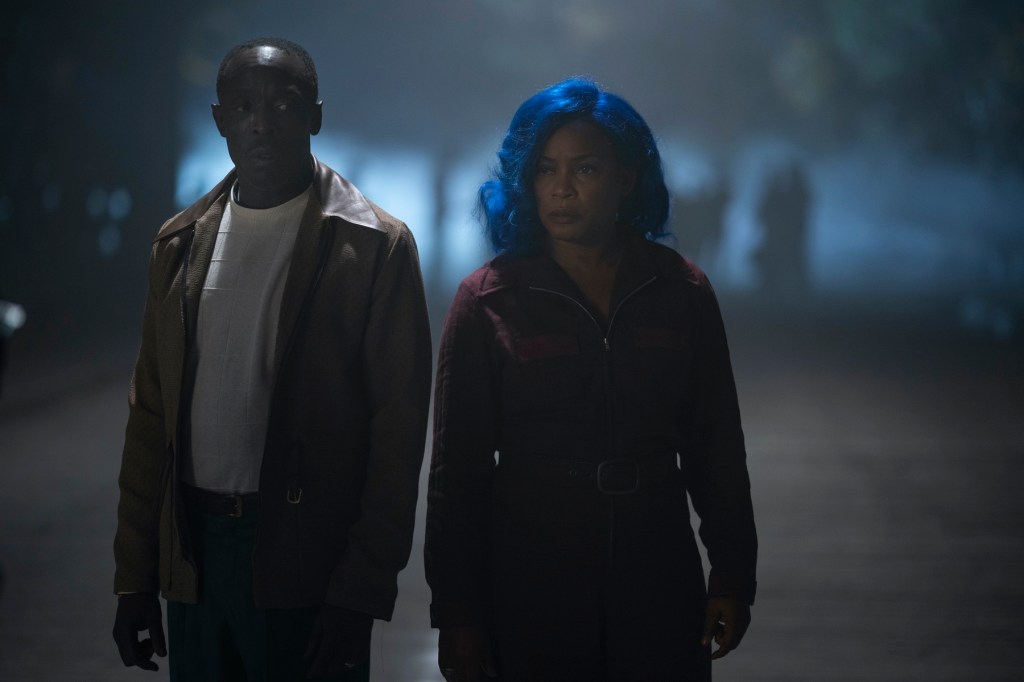 But the episode also starts drowning in exposition in spots, while at others it frustratingly opts to keep important information a secret, only to be revealed when Ji-Ah has Tic and Christina wrapped up in her tails. That’s not a bad idea in theory, but it’s done clumsily. We still don’t know, for instance, the nature of Tic’s control over the black-skinned shoggoth — and, thus, how he can essentially transfer ownership to his cousin — nor even why the spell he and Montrose cast a few episodes back had that result in the first place. We see that Tic and Leti were at the church earlier in the episode so that Tic could be baptized before his potential murder, but are we then meant to assume that God was behind the restoration of Leti’s invulnerability?(*)

(*) This recap was written before I spoke with Misha Green for a post-mortem interview. She explained that Christina-as-Ruby reinstates the spell after throwing Leti out the tower window, to keep her promise to the real Ruby that her sister wouldn’t be harmed. That’s not clear enough with how the episode plays out, unfortunately.

There’s also the matter of Christina ultimately not being that compelling a villain. The show has gone out of its way to depict her as different from her father, Titus, Captain Lancaster, et al. She’s selfish enough not to care if other people have to die to fulfill her goals, and lacks empathy in general, but she doesn’t take any pleasure in the suffering of Tic, Ruby, or the others. She just… wants to live forever, and have lots of amazing experiences as a result of that. When she comes to the garage and offers to trade a promise to leave the Freemans alone in exchange for The Book of Names, it seems a not-unreasonable offer! Hattie and Hanna have convinced Tic and Leti that the most important thing should be to wrest control of magic away from white people forever, which makes sense in the abstract. Christina’s just too nebulous an avatar for the family’s larger fear of how magic can be used against them in the future. She’s hurt enough people that it’s satisfying to see her taken down, but many of the smaller victories throughout the season felt much more visceral than the dispatching of our big bad.

Though the series made some significant departures from the novel, it has more or less covered all of the territory Matt Ruff wrote about. That gives Green a clean slate for any future seasons. Tic could stay dead, and we could just follow Leti and the other survivors on new adventures. Or Tic could get the Jon Snow treatment. (If nothing else, the existence of infinite parallel universes would make it easy for Hippolyta to bring an alt-Tic over here to help raise baby George.) Or the series could lean even harder into anthology and pick a new cast of characters, in a new time period, to explore the intersection between supernatural and historical horror.

There were moments throughout these 10 episodes where I would have gladly disappeared into Lovecraft for years on end, and others where it felt like the rough draft of the show it could still become. Hopefully, future seasons either get these disparate parts working in closer harmony, or else just lean away from the ones that are less effective than the others. What we got this time around was a great beginning, a frequently incredible middle, and an underwhelming conclusion. The highs were more than worth the rest. But is it possible to still reach them with a more consistent show? I very much hope we get a chance to find out. Because when Lovecraft is really cooking, it’s better than virtually anything else I’ve seen in a long time. 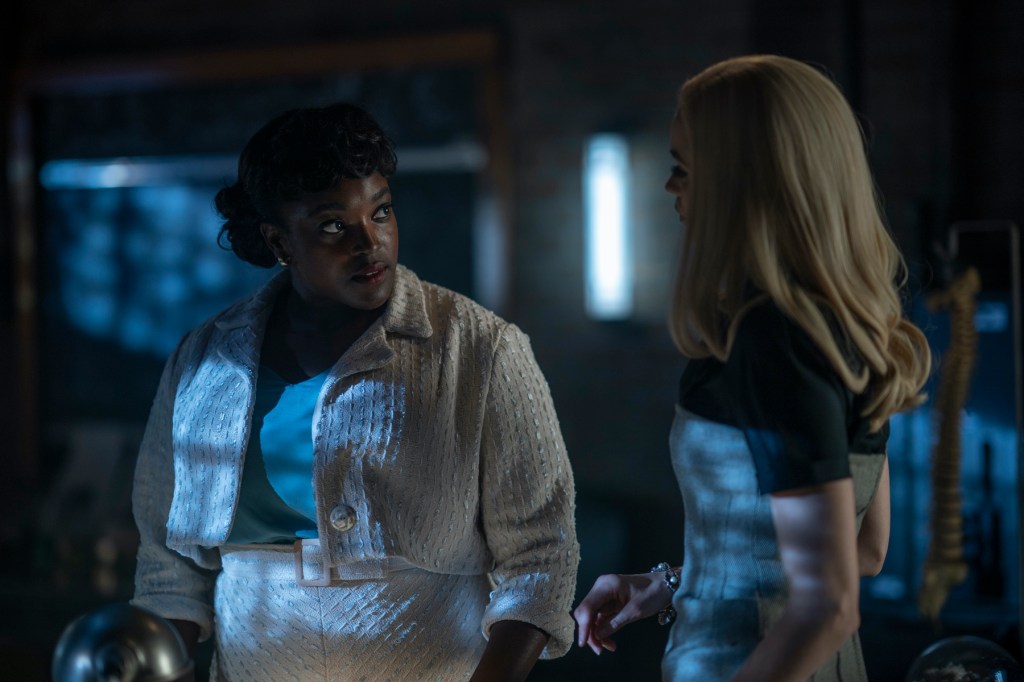 * When Misha Green and I spoke on Saturday afternoon, the fate of the series remained up in the air, but she very clearly has plans for many seasons beyond this one. We also spoke about the death of Tic, the overlap with Watchmen when it came to depicting the Tulsa Race Massacre, the spoken-word soundtrack choices, and a lot more.

* Justified and The Good Fight alum Erica Tazel has briefly appeared in previous episodes as Dora Freeman (usually as a photo on a wall, but she dances with George while he’s under Samuel’s spell in Ardham in the second episode), but this was her first extended bit of screen time. She does not exactly answer the question of who Tic’s birth father is, just insisting that he has a bit of both George and Montrose in him, spiritually.

* When Diana asks how Hippolyta learned to draw so well, her mom credits the advice of an artist named Afua, which is a wink at Afua Richardson, the Eisner Award-winning illustrator who in real life drew Diana’s comics.

* Right before Tic calls Ji-Ah at her hotel, we see that a black family has moved in across the street from Leti’s house. You can look at this as social progress (Leti’s pioneering opening up the neighborhood for other black people to peacefully co-exist with the white residents) or white flight (the racist neighbors heading for the suburbs because they feel Leti has ruined this area for them).

* Beyond the ruination of her left arm and her feeling of abandonment by her mother, Diana is also rightfully bitter to learn — via a headline in The Chicago Defender, the city’s most prominent black newspaper — that Emmett Till’s murderers were acquitted by an all-white jury. (And in 67 minutes, at that. Stephen Whitfield’s 1991 book, A Death in the Delta: The Story of Emmett Till, quotes one juror as saying, “If we hadn’t stopped to drink pop, it wouldn’t have taken that long.”)

* We don’t find out what Leti told Ruby in the cemetery that convinced her to turn against Christina. Nor, unfortunately, do we get much follow-up on the idea of Ruby exploring her sexuality, outside of her finally kissing Christina herself, rather than Christina-as-William. Montrose is still around, but killing off a character immediately after they start considering their queerness is an unfortunately familiar storytelling choice.

* Finally, the soundtrack was quite robust after last week’s episode leaned more on original score. Besides “Sh-Boom,” tracks for the finale included: “Easy Living” by Billie Holiday; “Ready or Not” by Gizzle; “Weary” by Solange; “I Am Blessed” by Nina Simone; and “Keep Your Lamps Trimmed and Burning” by Mississippi Fred McDowell. After a long streak of closing episodes with Alice Smith’s version of “Sinnerman,” these last two episodes did without it.