A review of this week’s Lovecraft Country, “Whitey’s on the Moon,” coming up just as soon as I help a cow birth a monster…

“Whitey’s on the Moon” is a real anomaly as the second episode of a Peak TV drama series. In these days of showrunners treating their seasons as 10-hour movies, or eight-hour premise pilots (like, say, the Lovecraft‘s predecessor in the HBO Sunday drama slot), what happens here would typically be saved for the finale. If Lovecraft were, say, a Netflix show, we probably would have spent a whole episode, if not two, in Chicago, then several episodes on the road, and at least half the season would have been devoted to Tic, Leti, and Uncle George stuck in that creepy mansion in Ardham, trying to assess their hosts’ true motives and figure out where Montrose has been hidden.

Instead, Misha Green and company squeezed all of that material into the space of two episodes(*). And thank goodness. Because can you imagine how tedious a full season of this would have been?

(*) My understanding is that Matt Ruff’s novel is also fairly episodic, so it laid the groundwork for this approach.

Even in this compact format, “Whitey’s on the Moon” suffers from pacing problems compared to last week’s premiere. A lot seems to happen in the space of an hour, yet it often seems to be happening very slowly, because it’s obvious from the get-go that our heroes’ young hosts, Christina Braithwhite and William (Jordan Patrick Smith), plus Christina’s father Samuel (Tony Goldwyn), are up to very bad things indeed. There are specific details to be worked out about what the Braithwhites are doing and why they need Tic for it, and Montrose’s whereabouts have to be ascertained. And the use of magic to keep the Freemans and Leti prisoners of the estate explains why they don’t just climb into Woody and leave. But, like the visits they pay to the neighboring village, with its racist watchkeeper Dell (Jamie Neumann), it feels like much of the episode is going back and forth over the same ground, just waiting for the big things to happen.

Fortunately, the hour is bookended with two dynamite musical numbers to make some of the thumb-twiddling in between feel worthwhile. In the first, George and Leti wake up in the Ardham Lodge to the glorious sound of Ja’net Du Bois singing “Movin’ On Up,” the theme to The Jeffersons and perhaps the most joyous piece of intro music any television show has ever had. Like several of the premiere’s songs, it’s an anachronism — The Jeffersons premiered more than 20 years after the events of this episode — but one that gets the show’s thematic and stylistic points across neatly and memorably. George and Weezie Jefferson moved on up from a Queens row house next to Archie Bunker to a deluxe apartment on Manhattan’s Upper East Side, while George and Leti find themselves rescued from the terror of those woods and deposited in the lap of personalized luxury. In his room, that means shelf after shelf of classic literature, and all the time in the world to read it. In hers, it’s a closet filled with haute couture, all of it perfectly sized. These are fantasies — made clear when we cut to Atticus sitting silently in his room, with no one singing about how fish don’t fry in the kitchen — but they are intoxicating ones to both George and Leti, and to the viewers who get to watch Courtney B. Vance and Jurnee Smollett radiate delight as they dance and sway to the music.

After that, the trio attempt to learn more about their hosts, the house, and the nearby village. They are mostly frustrated on each front. In town, Dell menaces them with her dogs, while suggesting these nonwhite visitors are the ones she’d rather see on a leash. At the house, William and Christina separately duck most of their questions, though Christina at least saves them from another shoggoth attack when they don’t heed warnings about being in the woods after dark. Complicating matters further is that the house keeps playing with George and Leti’s minds, so that they often forget what they learned the day before. 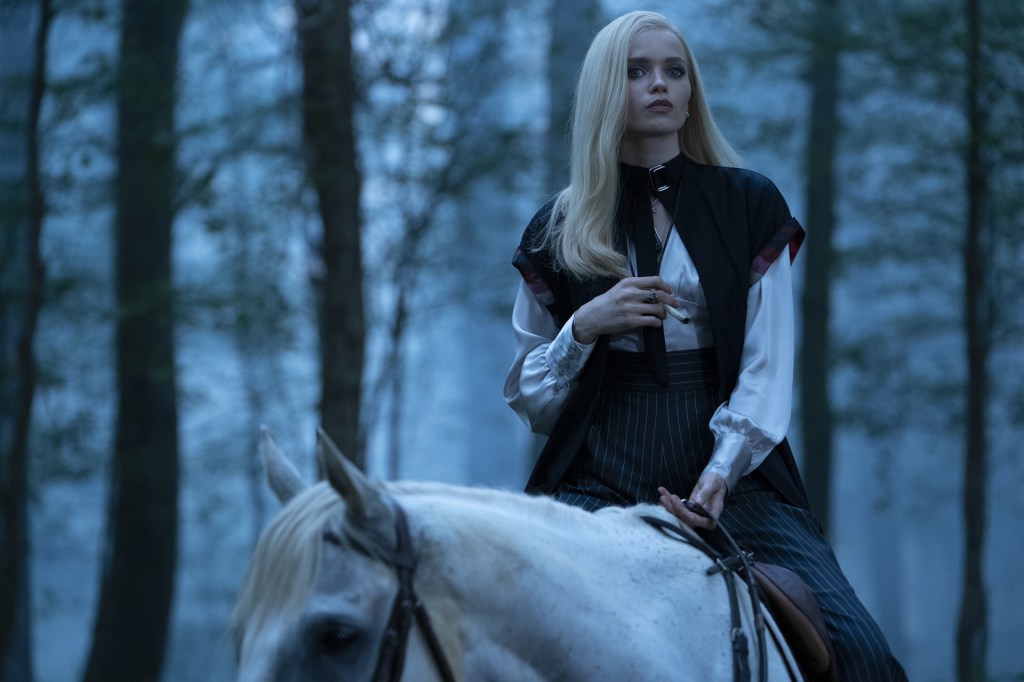 We get backstory in dribs and drabs, including the tale of Tic’s ancestor Hannah, who escaped a burning house and was apparently owned by Samuel’s ancestor Titus. And we eventually get to the point of this visit: Samuel wants to succeed where Titus failed, to open a gate to the Garden of Eden and gain immortality as a result. But he needs the blood of Atticus — who is also, it turns out, descended from Titus(*) — to complete the ritual. Leti and George both get shot during an escape attempt, and Samuel offers to heal them if Tic will in turn sacrifice himself for this grand ritual.

(*) In one of the episode’s sharper sequences, Tic realizes that his bloodline means that he technically outranks the other members of Samuel’s heinous cult, and he’s able to order the grumbling bigots out of the dining room to more directly confront the man in charge. In the end, though, Samuel’s wealth and literal power trump Tic’s legitimate legal claim, which… feels very familiar today, you know?

Along the way, there are some more mind games by the house — including Tic being forced to fight a Korean woman (who is perhaps the one he spoke with on the phone in the premiere?), while Leti gets to kiss a figment of Tic, as Samuel and the other bigots watch it all like it’s on television — and Montrose manages to free himself from his underground prison by taking inspiration from The Count of Monte Cristo. But most of the action feels sketchier than anything that happened in the premiere, at least until we get to the climax.

Even that’s not perfect, as it’s unclear exactly how Samuel’s ritual gets disrupted, killing him and his fellow racists while Tic, Leti, and Montrose escape. (Spoiler alert: George dies of his bullet wound, as anyone who watched his interactions with his wife in the premiere probably could have guessed, since they had everything short of him announcing that he’s two weeks away from retirement.) There seems to be something to do with the ring Christina gives Tic, and in the middle of the ritual, a black woman from centuries past — Hannah, I presume — appears to lead Tic to safety after Samuel and the others have been turned to salt. But it’s not evident in the moment what is happening, and whether Tic is in any way an active participant in his rescue, or just a bewildered passenger.

But man, the choice of Gil Scott-Heron’s “Whitey on the Moon” to score the sequence covers for a lot of sins — both in the climax, and in the entire episode. It’s not quite like the use of the James Baldwin speech from the travel montage last week, because Scott-Heron is reciting poetry to a beat. But the spoken-word nature of the song leaps out, particularly since the poem has so much to say about the many ways that black people suffer while white people are busy chasing grand, expensive fantasies:

It’s a dynamite sequence. And if Tic is perhaps as confused as we are about what happens, Jonathan Majors works wonders in portraying the agony and confusion of the moment. Smollett does something similar around the same time, when we see a horrified Leti wake up to realize her wound has magically healed; her reaction breathes new life into a very old cliché.

For most modern dramas, Tic’s narrow escape from the fiery destruction of Ardham would be the end of a big segment of the story. Lovecraft Country instead knocks the house down in only its second episode. The path to get there is a bit bumpy, but it makes sure we won’t get complacent for long with anything this show does.

* Michael Kenneth Williams could be seen in a few family photos in the premiere, but this is his first on-camera appearance. If James Gandolfini is the most important star in HBO history, Williams has been perhaps the most durable, with memorable roles on The Wire, Boardwalk Empire, The Night Of, and now this.

* Jamie Neumann, meanwhile, was part of the large The Deuce ensemble as Ashley/Dorothy, a sex worker turned activist across that show’s first two seasons.

* Among the episode’s creepier scenes: Christina heads into the village at night to assist with a cattle birth — only the cow is producing not a calf, but a baby shoggoth. Brrr…

* We learn not only that Tic is descended from Titus and Hannah, but that there is some question as to whether he’s Montrose’s son. Montrose insists the matter was settled a long time ago, but I’m guessing this will not be the last we hear of that subject, particularly given father and son’s difficult relationship.

* Finally, this week’s music (besides, of course, Good Times co-star Ja’net DuBois singing “Movin’ On Up”): “The End,” by Earl Grant; Mozart’s “String Quartet No. 19 in C Major (The Dissonance Quartet),” via Laura Karpman; “Blackbird,” by Nina Simone; “Killing Strangers,” by Marilyn Manson; and “River,” by Leon Bridges.