Prince Harry and Meghan finally revealed details about what necessitated their departure from the Royal Family, and how they’re adjusting to their new life in the U.S., in a blockbuster interview with Oprah Winfrey Sunday, March 7th.

The wide-ranging interview (expected to be available to stream on Paramount+ in the coming days), covered everything from Harry and Meghan’s initial courtship, to their difficulties with “The Firm” (how Markle referred to the Royal Family), to the moment they knew it was time for them to break out on their own.

“I wasn’t planning on saying anything shocking,” Markle half-jests to Oprah. “I’m just telling you what happened.”

While The Times of London also conveniently published a report last week that a former royal aide to Meghan filed a complaint with the palace in October 2018, accusing her of bullying her staff. A spokesperson for Harry and Meghan called the allegations an “attack” on Markle, a former American actress, who “has been the target of bullying herself” by people within Buckingham Palace

Here are five of the biggest moments and reveals from Oprah’s interview with Prince Harry and Meghan Markle.

1. Harry and Meghan Secretly Got Married Before the Royal Wedding

Though Harry and Meghan’s nuptials in May 2019 were televised before a global audience, Markle revealed to Oprah that the two officially wed three days prior, with Harry asking the Archbishop of Canterbury to serve as officiant. And while the Royal Wedding at Windsor Castle brought hundreds of dignitaries and celebrity guests to St. George’s Chapel — not to mention tens of thousands of fans lining the streets outside — the “official” ceremony had just three people: Harry, Meghan and the Archbishop.

2. Harry and Meghan Get Along With the Queen Just Fine

Contrary to tabloid reports, there is no bad blood between the couple and Queen Elizabeth II. Harry said he spoke at length with his grandmother about his desire to take on a “reduced role” within the Royal Family, contradicting reports in the press that the Queen was “blindsided” by the couple’s decision. “I’ve never blindsided my grandmother,” Harry told Oprah. “I have too much respect for her [to do so].”

Harry confirmed that he and Meghan are still in touch with Queen Elizabeth, adding that he has spoken to her more in the past year than ever before. And yes, their communication during Covid has even included “a couple Zoom calls.”

And while Markle admitted she was ill-prepared to meet the Queen for the first time (“Do you know how to curtsy?” Harry asked his stunned then-fiancé, just before the Queen was arriving to lunch), Markle said the Monarch has never been anything but kind and warm to her.

Much of Oprah’s interview with Markle revolved around the treatment she received from the UK press, as well as her life within “The Firm.” Markle reveals that she had to turn over her passport, driver’s license, keys and other personal belongings when she moved into Nottingham Cottage (part of Kensington Palace), and had to be granted permission to leave the palace grounds.

“I left the house twice in four months,” she told Oprah, adding that palace officials actively told her to stay out of the public eye. So while it seemed like she was living an idyllic fairytale, in reality, she said, “I couldn’t feel lonelier.”

Stuck inside the house, Markle said she recalls watching The Little Mermaid and relating to the animated titular character: “She falls in love with a prince and because of that she loses her voice.”

“Were you silent or silenced?” Oprah asks Markle, and the answer it seems, is a little bit of both.

Markle’s feelings of helplessness only intensified as British tabloids seemingly found a way to find fault in every aspect of her life, from the Duchess’ relationship with her family, to — as Oprah points out in mock horror — Markle’s fondness for avocados (allegedly a “front,” the Daily Mail reported, for human rights abuses and murder).

“That’s a real loaded piece of toast.” Meghan just made a great #dadjoke about avocado toast. And Oprah loved it. 🥑 #MeghanMarkle #OprahMeghanHarry

The problem wasn’t just the salacious rumors, Markle explains, admitting that she was able to brush them off as part of the territory at first, but rather that no one came to her defense. When tabloids declared that Markle had made Kate Middleton cry, reportedly over a rift over flower girl dresses at the Royal Wedding, Markle said no one refuted the rumor, even though everyone knew it wasn’t true. In fact, “The reverse happened,” Markle said, claiming she was actually the one brought to tears by Kate. (While Markle declined to get into specifics, she did say that Middleton later brought her a note and flowers apologizing for her behavior.)

Eventually, the relentless attacks from the press and lack of support from “The Firm” took its toll on Markle, and the Duchess said she began having suicidal thoughts. “I didn’t want to be alive anymore,” she told a clearly emotional Oprah in the interview. “It was a clear and real and frightening constant thought.”

When asked why she didn’t seek help, Markle said she asked to “go somewhere,” but the “institution” said no. It wouldn’t be a good look for the family, she recalled them telling her.

Meghan Markle tells Oprah Winfrey she contemplated suicide while living with the royal family as a working royal. pic.twitter.com/DZl5EBrlYD

Markle also described a photograph taken from an official event at Royal Albert Hall in 2019. Right before the event, she had confided in Harry that she was having suicidal thoughts. And while the Prince pleaded with her to skip the event, Markle said she told him, “I don’t think I can be left alone.”

Seeing the photograph now, Markle said you can zoom in to see how tight Harry’s grip is. “I think,” she tells Oprah, “we were both just trying to hold on.” 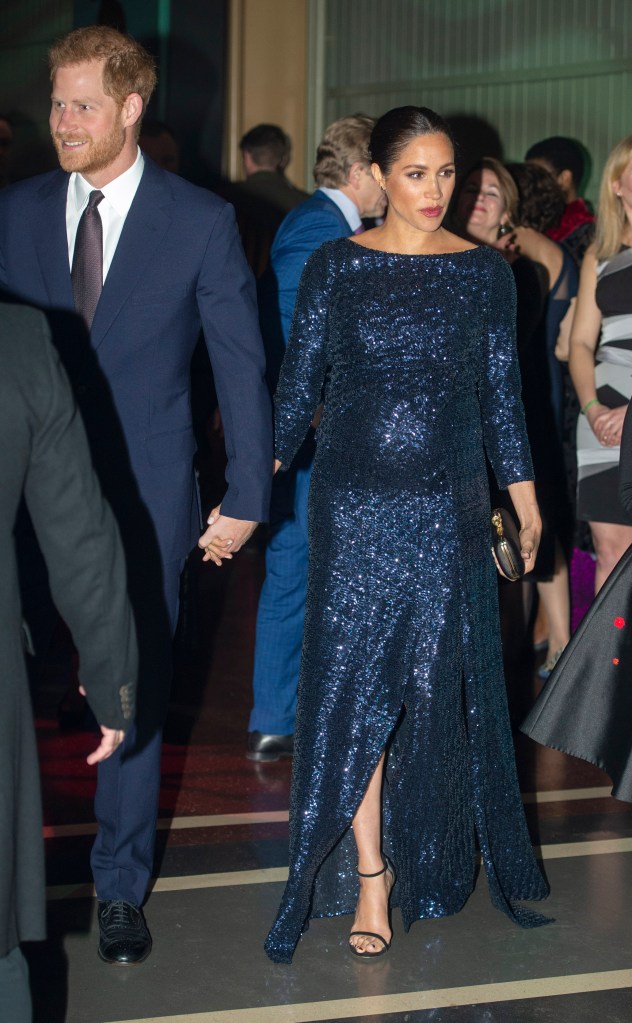 The Duke and Duchess of Sussex at the premiere of Cirque du Soleil’s Totem, in support of the Sentebale charity, at the Royal Albert Hall on Wednesday January 16, 2019 (Photo: AP)

In one of the more shocking revelations from the Oprah special, Harry and Megan revealed that members of the Royal Family were concerned about son’s skin color, even before he was born. “When I was pregnant,” Markle recalled, there were “concerns and conversations about how dark his skin would be when he was born. People were concerned with how dark Archie’s skin would be.”

Harry confirmed the conversation, saying that he was the one who heard it, and relayed it back to his wife. Both Harry and Meghan declined to reveal who made the statement, with Markle saying, “I think that would be very damaging to them [to reveal].”

Meghan Markle says several members of the Royal Family discussed with Harry concerns over what the color of Archie’s skin color would be.

Listen to the biggest bombshell so far of this entire interview with Oprah.#MeghanMarkle pic.twitter.com/CIQP6Q61pj

These racist undertones continued even after Archie was born, the Duke and Duchess said. After Oprah noted that Archie didn’t have an official photograph taken when leaving the hospital, as had been the tradition dating back to when Prince Charles and Princess Diana gave birth to Prince William in 1982, Markle responded: “We weren’t asked to take a picture.”

In January 2020, Harry and Meghan announced that they would no longer serve as senior members of the Royal Family, a decision that Harry said was necessary to avoid “history repeating itself” — a reference to his mother, Princess Diana’s death in 1997, while she was being pursued by paparazzi in Paris. The added factors of “race and social media,” Harry explained, only intensified the attacks on his wife and child.

The couple made it clear that they never asked to step down; rather, they asked for a reduced role, like many other members of the royal family. Buckingham Palace released a statement in February announcing that the two would not be returning to royal duties, and that Harry was to “give up his honorary military titles.”

When asked if he ever felt trapped in the Royal Family, Harry said it’s all he’s ever known, though he added he felt “trapped within the system.”

"Please explain how you, Prince Harry, raised in a palace and a life of privilege – literally, a prince – how you were trapped?" – Oprah#OprahMeghanHarry pic.twitter.com/oZ0JoySfRg

“My father and my brother are trapped,” he said candidly. “They don’t get to leave and I have compassion for that.”

At one point in the special, Harry revealed that Prince Charles stopped taking his calls, and while he told Oprah that the line of communication has opened somewhat, Harry admitted, “There’s a lot to work,” when it comes to repairing the relationship with his father. “There’s a lot of hurt that’s happened and I will continue to make it one of my priorities to heal that relationship,” he said.

As for his relationship with his brother, Prince William, Harry admitted that it’s been fraught, and said the best way to describe the brothers’ current status is “space.”

6. What’s Next for Harry and Meghan?

Though Harry and Meghan briefly lived in Canada after leaving the U.K., they have since settled in Montecito, a small town along the California coast just east of Santa Barbara (where they live near Oprah Winfrey, and call each other neighbors). The couple’s sit-down interview with Oprah was interspersed with moments of them showing the talk show host around their new property, including a chicken coop dubbed “Archie’s Chick Inn.”

The two are currently working on developing projects for Spotify and Netflix, as well as doing charitable work through their foundation, Archewell.

As for the takeaway from the interview, Markle said the couple want to encourage people to seek kindness and love. “You have no idea what’s going on for someone behind closed doors,” she said, “so have compassion.”

The Royal Family have not directly responded to Prince Harry and Meghan’s interview, though the Queen did appear in a videotaped message as part of the U.K.’s Commonwealth Day festivities Sunday, calling for “unity” and togetherness during this “time like no other.”